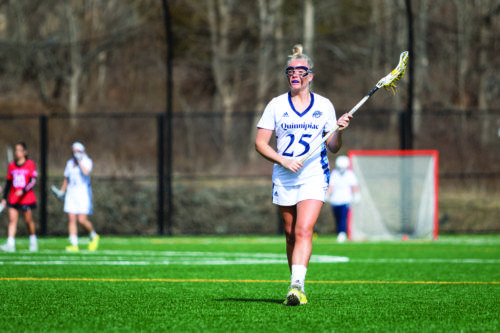 The Quinnipiac women’s lacrosse team stumbled in its final game of the season, dropping the home matchup against the Monmouth Hawks by a score of 19-12.

The scoring started early in this one, with Monmouth (12-5 overall, 6-2 MAAC) putting in its first goal just two minutes and 50 seconds into the game. The Hawks quickly followed their first score with another just 40 seconds later to make the score 2-0 early.

Quinnipiac (5-11 overall, 2-6 MAAC) struggled to maintain possession in the first five minutes of the game, making Monmouth look like a real powerhouse on the field. 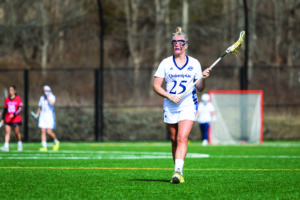 [/media-credit]Quinnipiac struggled to connect on many of its passes on the offensive end. Whenever it managed to create a scoring opportunity, it was almost always soiled by an inability to complete a pass.

The Bobcats opened up their scoring courtesy of two, back-to-back free position goals. Junior midfield Brianna Fitzgerald carried the ball both times, charging straight towards the goal and shooting low. She managed to put both in, closing the gap to one goal with plenty of time remaining in the first half.

The scoring didn’t stop there, as Quinnipiac would make its way back from down three goals to tie the game with 17 minutes remaining in the first half. Senior attack Allison Kuhn saw an opening in front of the net and took her shot, screaming it passed the goalkeeper to even the score at 3-3.

“It’s kind of funny, in our scouting report we said we’re going to steal momentum and we’re going to break momentum,” Quinnipiac head coach Tanya Kotowicz said. “Normally, when three goals happen we call a timeout, but this time we thought ‘let’s let this one ride, [our players] know what they need to do’ and they did it.”

The momentum didn’t last long for Quinnipiac, though, as Monmouth would net two consecutive goals in a matter of moments, taking less than a full minute between goals to regain the lead.

That seemed to be the theme for Monmouth throughout the entire first half, as the Hawks scored two goals separated by less than a minute on three different occasions, making it next to impossible for Quinnipiac to find its way back into the game.

“Momentum swings definitely got us today,” Kotowicz said. “We talk a lot about breaking the play, the little things matter, and we started to do that better in the second half. I think the first half, though, we could have done a better job.”

After six goals in the final 10 minutes and 20 seconds of the first half, Monmouth entered halftime leading 11-4 and with all sorts of momentum. The game seemed decided with the entire second half to play.

“[The message at halftime was] we’ve got to believe, got to keep going,” Kotowicz said. “There’s another 30 minutes, and we’ve done this before. We’ve been down before and we’ve won the game, so let’s go, and they did that.”

Quinnipiac came sprinting out of the gates to begin the second half. Junior attack Megan Szawlowski scored her team-leading 33rd goal of the season just 23 seconds into the half to cut the Monmouth lead to six goals.

Following an incredible display of lockdown team defense, freshman midfield Gabby Beckett put in her first goal of the day to cut the Hawks’ lead to five goals. Just over one minute later, Beckett scored again to cut the lead to four.

Monmouth had an answer to the Bobcats’ hot start in the second half, scoring its first goal of the half 58 seconds after Beckett’s second goal, extending its lead back to five.

“[Our players] came out in the second half and they were ready to fight,” Kotowicz said.

The Bobcats had an answer, scoring two minutes later to cut the lead back to four, the score reading 12-8 with 23 minutes and 37 seconds left to play. The momentum only lasted so long, though, and Quinnipiac soon found itself down 14-8 with less and less time to erase a deficit that kept growing.

Monmouth would go on to score six of the next seven goals, extending its lead to nine with 11 minutes and 40 seconds remaining in the second half.

Quinnipiac showed signs of life late, as Kuhn and Beckett both scored their third goals of the game within the last six minutes and 40 seconds of the game, but the true dagger came when the Hawks scored their 19th goal of the day at the four minute mark. The goal extended the Hawks’ lead to eight, ending any chance of a comeback.

Following this loss, Quinnipiac was officially eliminated from the playoffs, making it the last game of the Bobcats’ season.