During her freshmen year, Goldberg felt the newly-established organization could take advantage of the Sundance Film Festival. She quickly threw an application together and Quinnipiac was one of 10 schools chosen for the program allowing students to attend.

This year, Goldberg interned and worked for the festival during winter break. She has been instrumental in making this trip to Sundance happen. And with more financial support from the school, it is simpler for QFS to make what has now become an annual trip.

“You need to go in there with the most positive attitude,” Goldberg said. “You have to be so psyched that you are going to attend and be super open-minded.”

According to Goldberg, attending the Sundance Film Festival is the perfect opportunity to network and establish connections within the film world.

“There are opportunities to meet so many indie directors and that’s essentially what we are: we are independent filmmakers,” Goldberg said. “We are trying to find our place in this little film world.”

After meeting several filmmakers, Goldberg and others came out of the Sundance experience with invaluable advice that will last them a lifetime as they will eventually graduate and find employment in production. 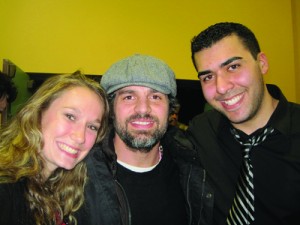 QFS President Matt Galo had lunch with director Eyad Zahora, whose film “The Taqwacores,” played at the festival, and gave the aspiring filmmakers his own words of wisdom.

“He gave me great insight into what I should expect in the future and really made me believe in independent film,” Galo said.

Meeting actor Mark Ruffalo and attending a screening of the film “Frozen” also made for a more memorable experience for Galo.

“People were actually leaving the theatre because of the gore in [‘Frozen’],” Galo said. “It was a truly horrifying film.”

One popular venue that piqued the interest of several students this year, included “(500) Days of Summer” actor Joseph Gordon-Levitt’s exhibit, hitRECord.org. Gordon-Levitt began the project almost five years ago and it works toward the collaboration of filmmakers.

Goldberg hopes a short film from Quinnipiac will make the trek to Park City at some point to compete in a new category that accepts student films. With the new senior projects in the School of Communications, Goldberg would like students to submit their features to QFS, who would then submit them to Sundance.

Student satisfaction is essential to the growth of the program. Goldberg specifically mentioned one student who viewed 10 films in just five days.

“Sundance is exactly what you make of it,” Goldberg said. “If you just want to sit home then don’t come. You’ve got to take advantage of it.”