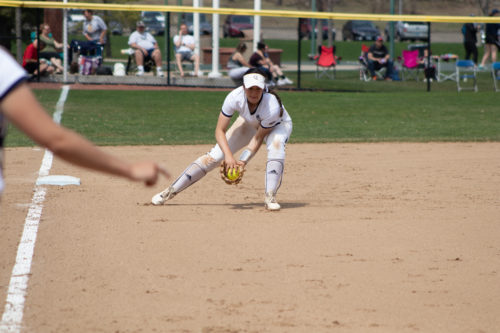 The first game saw little scoring for Quinnipiac. The team managed just four hits over the course of the game, compared to the five strikeouts that batters suffered. Freshman catcher Lo Yarnall drove in the only two runs of the game for the Bobcats in the fifth inning, when they were already trailing 4-0. 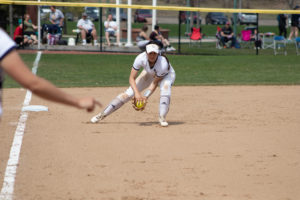 [/media-credit]Marist managed to double Quinnipiac’s hit total in game one, recording nine that resulted in four runs by the end of the fourth inning. Freshman pitcher Calista Phippen impressed, going the distance to pitch all seven innings and record her 14th win of the season.

Game two saw a much slower start than game one. There were hardly any base runners for either side through the first two innings, and the game became a pitchers duel early on.

The scoring drought lasted all the way until the bottom of the fifth inning, when Quinnipiac finally put some runs on the board. After another quick out from freshman catcher Hannah Davis again, redshirt senior outfielder Jen Fay drew a walk to reach base in both of her plate appearances so far.

“I don’t want to say I’m surprised, just because I think [Fay] is really athletic,” Barrow said. “Whenever she succeeds [the team] gets so excited for Jen because we see her do it in practice, it was just a matter of seeing her doing it in games. I was proud of her.”

Sophomore second baseman Kayla Jensen hit a line drive to the left of Marist’s redshirt junior third baseman Claire Oberdorf, who dove in an effort to catch the ball. The ball would pop out of her glove, awarding Jensen a base and advancing Fay to second with just one out.

Senior Erin Larsen was up to bat next, and with a full count she crushed a line drive to left field. The ball was fielded cleanly by senior outfielder Casey Page, who immediately came up throwing.

Quinnipiac’s third base coach told Fay to hold at third, but Fay disregarded her sign, instead sprinting for home. The throw was in time but off the mark, and Fay managed to score, putting the first run of the game on the board. After that at bat, the floodgates had officially opened.

Otero was up next in the order, stepping up to the plate with two runners in scoring position. Just two pitches into her at bat, she smashed a ball to deep, left-center field, driving in both runners.

“I thought it was awesome, because last game we talked about how we kind of waited too late to make adjustments,” Barrow said. “I was proud of [my players], to see them keep their heads up and energy high, and get [Marist senior pitcher Megan Beiermeister] out of the game.”

The inning wasn’t over quite yet, though. Yarnall grounded into what looked to be a double play, but once again there was a controversial call. After Yarnall appeared to be out, the umpire called her safe and to the displeasure of the Marist coaches, Yarnall was awarded first base and an RBI, and Quinnipiac left the fifth inning leading 5-0.

Marist was ready to respond in the top of the sixth inning. Page reached first to start the inning, and junior right fielder Ali Milam singled on a line drive to center to advance Page to second.

With two runners on and only one out, senior second baseman Brandi Coon lined another shot to center field that loaded the bases and gave Marist an enticing scoring opportunity.

Oberdorf stepped to the plate with the bases loaded and an aggressive mindset. On the first pitch, she swung and made contact, sending the ball screaming to the sky. The ball went straight up and fell straight back down, right into the mitt of Davis for the second out of the inning.

Freshman catcher Kaley Coltrain followed with a ground ball to third that was easily corralled by Drake, who stepped on third to end the inning without allowing a single run, keeping King’s shutout intact.

“I think we were good to go, we had a big lead,” Barrow said. “I think it would have been a little bit different if it was one to zero or two to zero, but it wasn’t like the winning run or the tying run was at the plate. We felt good and we were confident despite the jam.”

Otero added some more run support in top of the sixth inning, driving in a runner from second with two outs and advancing Fay to second base.

King pitched well throughout the game, ending with a complete game shutout. She allowed five hits over the course of the game, striking out three batters and walking only two.

“I thought Lauren pitched a great game,” Barrow said. “I was confident in what she was able to do.”

Quinnipiac won’t play again until Saturday, April 20, when it faces Rider in MAAC doubleheader action at 12 p.m. and 2 p.m at home.