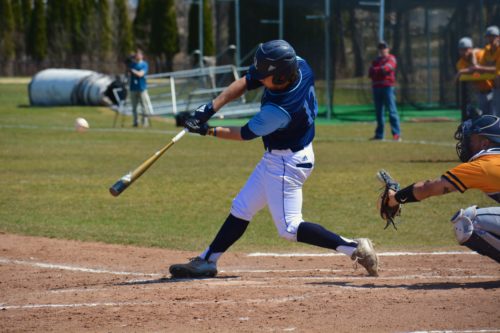 After defeating La Salle University 12-0 on Sunday, the Quinnipiac baseball team (15-19 overall, 7-2 MAAC) put together another double-digit offensive performance as the Bobcats defeated the Yale Bulldogs (11-21 overall, 5-7 IVY) 12-8 on Tuesday.

The Bobcats’ bullpen is what stuck out in Quinnipiac head coach John Delaney’s mind, as they only let up one run on six strikeouts.

“It’s a big piece and we had a long talk with the guys on Sunday,” Delaney said. “They were able to throw a shutout for us on Sunday and came in and did the same thing today (Tuesday). The biggest thing is if our bullpen can do the same thing they’ve done the past couple games and keep us in the game, our offense has shown the ability to crawl back into games.” 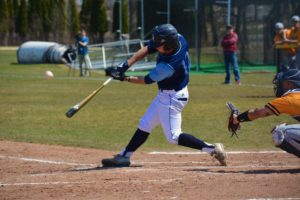 [/media-credit]Quinnipiac had to crawl back into this game, as Yale scored five runs in the first two innings. Two of those runs came from Yale senior outfielder Griffin Dey, who leads the team in batting average (.336), home runs (8) and RBI’s (34).

However, Yale decided to pull first-year starting pitcher Grant Kipp after one inning, to which the Bobcats took advantage of. The bottom of the third inning saw the Bobcats score four runs on four hits and regain a 5-4 lead.

Being in a 5-0 hole, Delaney sensed that the Bobcats could strike at any moment as they’ve shown resiliency all season.

“Our mentality has been a little bit different,” Delaney said. “These mid-week games are hard because you usually face five to six arms in one game. What’s been the difference in the past two games is they’ve been locked in from pitch one to the last pitch.”

Quinnipiac would be up 8-5 until the top of the sixth inning, where Yale answered with its own three-run inning. The bottom of the eighth is where the Bobcats came up clutch as junior infielder Evan Vulgamore showed why he leads the team in batting average as he hit a double to give the Bobcats an 11-8 lead.

Senior catcher Colton Bender would hit a single into right field to give the Bobcats a 12-8 lead. While each starter had a least one hit, the biggest story of the game was the production from freshman designated hitter Kyle Maves.

Maves was able to get on base five times with two walks and three hits. While Maves has also wreaked havoc on the basepaths with a team-leading 13 steals, he knew the bats would eventually come around.

“In the past couple mid-week games, we’ve gone down early and our energy has been low,” Maves said. “Coach (Delaney) talked to us about taking the mid-week’s more seriously and today we did a good job of staying locked in throughout and having good energy.”

While Maves bat may not be the most consistent, his aggressive baserunning doesn’t go unnoticed.

“Maves is a big piece,” Delaney said. “When he’s on the basepaths, he creates havoc as in his last at-bat he’s able to get to third base on a routine ground ball. The past couple of weeks, he hasn’t been swinging as well to be on the bases enough, but when he does he can do things for our offense that’s hard to defend.

While Quinnipiac’s offense has shown its potential these past couple of games, it faces a true test in the Bryant Bulldogs (24-12 overall, 7-2 NEC) who Quinnipiac lost to 5-2 on March 5.