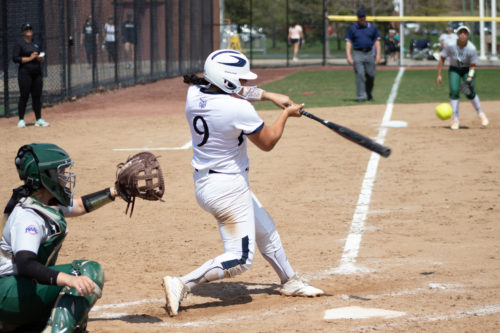 In the first game, the scoring action came in the second inning for Siena as it took a commanding 3-0 lead. The scoring started when freshman infielder Sabrina Vargas reached on base due to an error that brought sophomore outfielder Neysa Ouellette in to score. 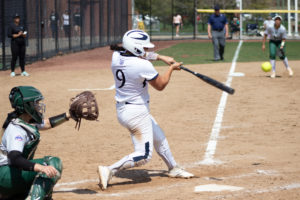 [/media-credit]A hit from senior first basemen Madysen Cossack would bring in Vargas to score, as well as senior infielder Jessika Jaime, and Siena extended its lead to 3-0 over Quinnipiac. In the third inning, Jaime singled, bringing in junior catcher Amanda Dodson to score making it a 4-0 lead.

Quinnipiac tried to rally back after freshman designated hitter Lo Yarnall hit a double, making freshman catcher Hannah Davis and freshman infielder Alexis Otero score which cut the lead in half to make it 4-2. However Quinnipiac couldn’t complete the comeback and the first game ended with a 4-2 victory for Siena.

“We just have to be able to bring that intensity one through seven and not wait until the last minute,” Quinnipiac head coach Hillary Barrow said. “It’s just something we got to get better at and making adjustments way earlier in the game.”

Not much changed in the second game as the scoring didn’t begin until the third inning for Siena. It all started when Cossack delivered a home run over the right- field fence. Then junior outfielder Lauren Sabihon decided to join her teammate as she sent the ball over the left field fence making it 2-0 for Seina.

Quinnipiac got on the board in the fourth inning when Otero hit a double, driving in senior outfielder Erin Larsen cutting Siena’s lead to 2-1. In the sixth inning, Siena extended its lead after Jaime hit a sacrifice fly ball, and tagging up was Dodson who just beat out the throw to the plate making the lead 3-1.

Siena didn’t stop the scoring there so it extended the lead even further in the seventh inning. The scoring started when senior designated hitter Loryn DeFalco hit a single, having Cossack score from second base making the score 4-1. With two players on base, up to the plate was Ouellette. She would join in on the home- run party, driving the ball over the center- field fence making the score 7-1 Siena.

Quinnipiac had no response of its own, resulting in a 7-1 loss for Quinnipiac, completing the sweep for Siena.

“I think we can be a little bit mentally tougher…” Barrow said. “It’s towards the end of the season between school and injuries and the girls are just trying to push through everything right now so it’s getting mentally tougher.”

Quinnipiac will look to bounce back at home against MAAC rival Marist starting at 2 p.m. in double header action on Thursday, April 18.