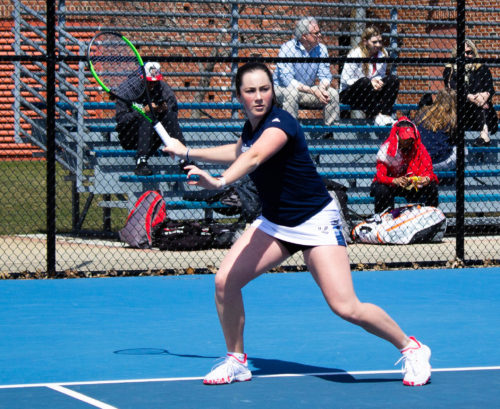 Quinnipiac began the day with an advantage over Saint Francis as the Red Flash only had five players available. With that said, there were only two doubles matches, and the Bobcats only needed to win one to secure the point. 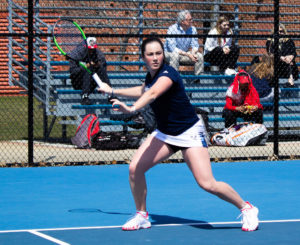 [/media-credit]“Last week we had the same thing with another team, so we’re used to it,” Quinnipiac head coach Paula Miller said. “Even though you only need one more doubles point and you have two out there, you just got to stay focused and just play as if it’s six and we’re not even up.”

Sophomore Dominique Vasile and senior Proyfon Lohaphasian teamed up to win another No. 1 doubles 6-4. This win improves the duo’s record to 8-5 on the season. For No. 2 doubles, freshman Kamilla Nella and sophomore Payton Bradley lost 6-4.

The lone doubles loss proved to be the first of two losses on the day for the Bobcats. They marched into singles matches up 2-0 due to a default No. 6 singles victory.

With that win, Nella earned her 12th singles win, tying her with sophomore Courtney Nash for the most on the team. Miller has been pleased with her play thus far, especially since she’s the lone freshman on the team.

“We’ve had a really hard schedule, so for them to have 12 wins on what we’ve been playing has been great,” Miller said. “Her playing the three position up top. I’m just happy with her play, and she’s done a great job.”

“We still need to work for it as we have Marist on Saturday, who’s another one on the top of the league,” Miller said. “So, even though we say it looks like dominated, it was closer than what it really was. So, we just have to keep pushing harder and I want to dominate each match.”
Quinnipiac has a few days to rest as the next match is against Bryant on Thursday April 11 in Hamden.

“First, tomorrow we need a little rest after playing two days, and after playing these past two days, we just need to figure out what we need to work on with each person,” Miller said. “We have three days of practice to get that done, so we’re excited.”