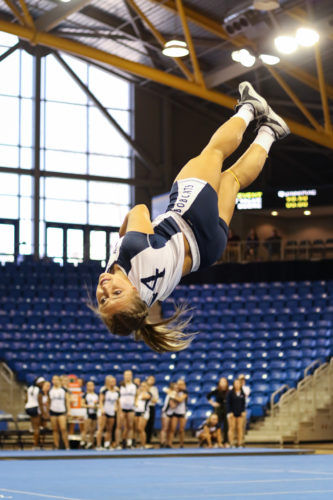 The Quinnipiac acrobatics and tumbling team’s seniors got to leave their home mat for the last time with a Senior Day win as the team beat Alderson Broaddus by a score of 274.645-255.94. 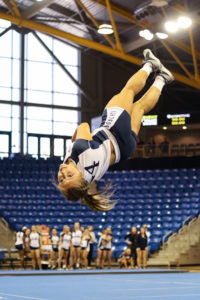 [/media-credit]“I think we had a really strong meet,” senior base and captain Allie Williams said. “Coming out, compulsory, acro, we had a little bit of a mistake there, but we bounced back with pyramid and a ten in the toss. From then on, I feel like we went up so I was really proud of it.”

This marks the first recession in overall score and team event score that the Bobcats have seen all season. Ahead of the National Collegiate Acrobatics and Tumbling Association (NCATA) National Championships, the Bobcats need to strike a balance, according to Quinnipiac head coach Mary Ann Powers.

“I think we’ve got two weeks to get prepared for national championships,” Powers said. “I would imagine after the scores today we’re going to stay in the four-spot. We’ll be OK. The meet today, some things they did better last week, some things they did better this week. I just want to find those two where they merge those both together … a little bit more consistency.”

This senior class has helped Quinnipiac to be a constant threat in the NCATA Championships and have seen the program’s first ever win over the Oregon Ducks in last season’s 274.585-271.93 upset in Eugene.

“It’s just crazy that it’s been four years and four years ago was my first time being on this mat,” Williams said. “For me, it’s just bittersweet. My time here was amazing and the girls in my senior class, I couldn’t ask for a better group of girls. I’m just really happy, but also sad I won’t be back next year.”

The Bobcats look ahead to a trip to Waco, Texas as the Baylor Bears are hosting the NCATA National Championships. Baylor has won four straight national championships, including last year’s 283.360-274.650 defeat of Quinnipiac.

“Listen, here’s what I think about Baylor,” Powers said, “I think that their scores right now are 15 points above all the rest of us from the five seed on down. I think it’s going to have to be a Cinderella story somewhere, but I’m up for it. I want (my team) to enjoy each other while we’re there, give the best scores of the whole season so that their season ends on the best note possible. That’s what the sport is all about.”