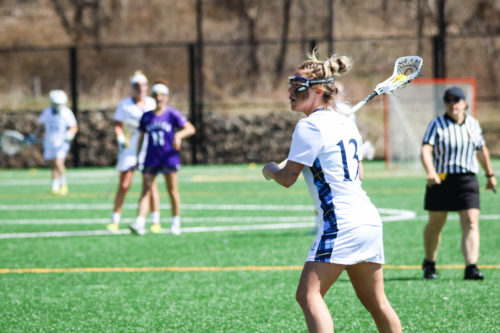 The Quinnipiac women’s lacrosse team (5-8 overall, 2-3 MAAC) lost a close game in MAAC play Saturday afternoon at the Quinnipiac Soccer and Lacrosse Stadium against the Niagara Purple Eagles (4-9 overall,1-3 MAAC) by a score of 15-14 on Senior Day for the Bobcats.

“Momentum wins,” Quinnipiac head coach Tanya Kotowicz said. “I think they stole that momentum at the end of the first half and kept it rolling at the beginning of the second half. Their two key players stepped up pretty big when we got tired.” 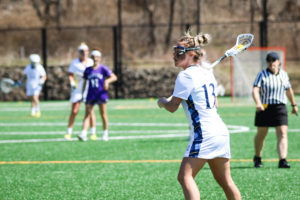 [/media-credit]On a day that began with the celebration of the 10 seniors on the team, the Bobcats got their offense going early in the first half, with junior attack Megan Szawlowski opening the scoring on a free-position shot.

The Bobcats’ offense was led by senior attack Allison Kuhn, who finished the day with three goals and an assist. Senior midfielder Julia Corrice as well as junior midfielders Ashley and Victoria Bobinski added two goals apiece on the day.

The offense for the Bobcats was strong throughout the first half, scoring 11 of their 14 goals in the half. The first half ended with two quick goals by Niagara senior attack Rachel MacCheyne on back-to-back free position shots to bring the score to 11-4.

In the second half, Niagara’s offense exploded for 11 goals, led by MacCheyne, who added four more goals to end the day with six goals and an assist on the game winner to junior midfielder Alex Leo. Senior attack Caroline Crump scored five goals of her own.

In a much more physical half than the first, Quinnipiac found itself on the wrong side of three yellow-card penalties, ending up in a man-down situation. Niagara converted on all three man advantage opportunities.

“Our first half shows that we can create quite the separation,” Kotowicz said. “Now it’s just a matter of learning how to keep that separation.”

The Bobcats will look to hit the reset button when they take on Siena (7-5 overall, 3-1 MAAC) at home on Wednesday, April 10 in conference play.