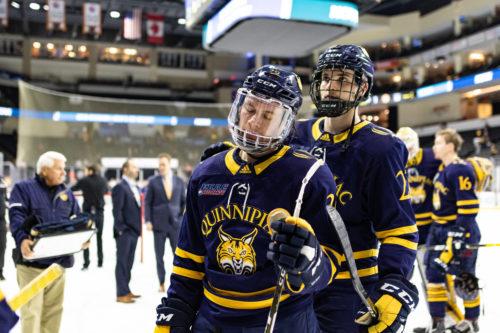 Hands were shaken, hugs were shared and the Quinnipiac men’s ice hockey team skated off the ice for the final time in the 2018-19 season on Sunday night. 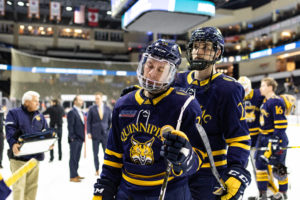 [/media-credit]Quinnipiac fell to Minnesota-Duluth in the Midwest regional finals of the NCAA Tournament by a score of 3-1, ending a season in which it saw a great turnaround after a dismal 16-18-4 season the year before, finishing this season 26-10-2.

“Disappointing for us to have our season end, but I am really proud of the effort that we put in this year,” Quinnipiac head coach Rand Pecknold said. “Last year was our first losing season in 20 years and I think we got the program back on track this year with a trip to the Elite Eight and 26 wins… I am proud of our effort this year and disappointed with the result, but we will be back.”

For the season as a whole, there was a lot of success despite a lack of tournament titles. Quinnipiac placed in the top 10 in the nation for most of the year, ending with a No. 8 ranking for the NCAA Tournament. After being predicted to finish No. 7/No. 8 in the ECAC Hockey in the preseason polls, it earned a share of the Cleary Cup for finishing as the regular season conference champions, and was awarded the No. 1 seed in the conference tournament.

But it was a tough last stretch for the Bobcats. They were upset in the quarterfinals of the ECAC Hockey by Brown and then didn’t make the Frozen Four in the NCAA Tournament. And there’s a pretty clear reason as to why this team was impacted late in the season – the absence of injured senior defenseman Brandon Fortunato.

“It hurt losing Fortunato,” Pecknold said. “I think that Brandon was top five or top six defensemen in the nation and for the second half of the season. He was our best player and he was dominant.”

Fortunato was injured during a practice in early February that sidelined him for the rest of the year. He was one of the top point scorers on the team and was at the helm of the power play unit that was one of the deadliest in the nation before going down with the leg injury. Fortunato left a void that wasn’t able to be filled.

“You can look at the records,” Pecknold said. “We were 20-5-1 with him and 6-5-1 without him. The power play went down, everything went down and it was unfortunate. You can’t replace an elite player like that with anybody, it’s just not possible.”

To put Fortunato’s value perspective, he still managed to finish fourth on the team in points with 28 and second on the team in assists with 23 – despite missing the final 12 games of the season.

After that came more losses on the defensive end. Senior defensemen Chase Priskie and Luke Shiplo both received suspensions in the final game of the regular season against Yale. Each were out in game one against Brown and Priskie was out for game two as well.

“In the end, I think we got what we deserved,” Pecknold said in regards to the suspensions after being swept by Brown. “We took major penalties against Yale in the last game of the year, we deserved our guys to sit, we got punished for that. That hurt us and then we just didn’t play well either night.”

But let’s look at the positives. And boy, there are a lot.

One of the biggest reasons for the success of the team was junior goaltender Andrew Shortridge. He concluded the season with an 18-7-2 record and four shutouts. He led the nation in save percentage with a .940 and was second in goals against with a 1.51. Shortridge is also a finalist for the Mike Richter award, an honor given to the nation’s best collegiate goaltender.

“[Shortridge] has been awesome,” Pecknold said. “It was an unusual year. We started the year and he was struggling a little bit out of the gate and we have two excellent goaltenders. Then we started getting [Shortridge] in there and shutout, shutout, shutout. We split them for awhile, but we went with him at the end. We had a great year from both of our goalies and obviously, his stats prove it.”

The game against Minnesota-Duluth marked the final game for Shortridge as a Bobcat. On Tuesday, April 2, it was announced that he had signed an entry-level contract with the San Jose Sharks. Junior defenseman Brogan Rafferty won’t be returning to the Bobcats either, as he signed a one-year entry level contract with the Vancouver Canucks on Monday, April 1. 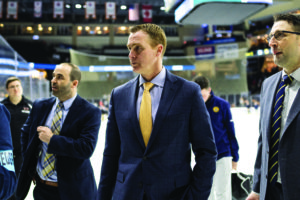 [/media-credit]“We will have to reassess in a few days after we see if we will lose some underclassmen to the NHL,” Pecknold said. “There is always that threat because if you are going to be good, you are going to lose guys to the NHL.”

Junior defenseman Karlis Cukste may also opt to leave a year early. Cukste is a draft pick of the San Jose Sharks, so he could be joining Shortridge on the west coast.

For the returners, there’s a big group of freshmen and sophomores that have used this season to progress their game, most notably the freshmen. Ten out of the 13 on the roster played in 20 or more games, and five of them played in every game.

“Yeah it is unbelievable,” Pecknold said of the freshmen’s progression. “Where we were in October and we started playing games with all of those freshmen. There are all different levels of kids that took jumps, but you have [Ethan] de Jong, [Wyatt] Bongiovanni, [William] Fällström, [Peter] DiLiberatore, those four just kind of shot up and went. They were good players before they got to us, but they learned how to play the right way and how to defend.”

Fällström centered the second line for the entire season and finished ninth on the team in points and was named to the Midwest regional All-Tournament Team. DiLiberatore ended the season with 19 points and was one of three finalists for the ECAC Hockey Rookie of the Year Award.

“The core below [Bongiovanni, de Jong, DiLiberatore and Fällström] did a nice job too,” Pecknold said. “It was interesting, it was late and [freshman forward] TJ Friedmann has really come on. I think that he was our best player [Sunday night] and he had some struggles early in the season, but just keeps getting better and better. He is kind of popping right now so we are excited to see where he is going to be next year.”

In addition to Friedmann, freshmen defensemen Zach Metsa and Cam Boudreau saw an increase in minutes late in the season, with the injury to Fortunato and the suspensions to Priskie and Shiplo. Pecknold praised both Friedmann and Metsa’s efforts in the Brown series, as Friedmann slid back to defense in those games and Metsa saw increased ice time.

For the freshmen forwards, Michael Lombardi was the fifth freshman to play in every game as a member of the bottom-six forward group. Desi Burgart probably would have also played in every game if not for an injury in November that sidelined him for five games.

“I like where we are at right now,” Pecknold said. “I like the talent that we have and the character. Our culture is excellent and that is why we win. I thought that [associate head coaches] Joe [Dumais] and [Bill Riga] did a great job recruiting this class to get us back on track.”

As for the senior group of Priskie, Fortunato, Shiplo and forwards Craig Martin and Scott Davidson, it’s the end of their time at Quinnipiac.

Priskie, a draft pick of the Washington Capitals, will most likely be signing an entry-level contract in the near future. He leaves Quinnipiac as the leading career goal scorer among all defensemen in Quinnipiac history with 39 goals, as well as reaching 100 career points. He also is a finalist for the Hobey Baker award, given to the best collegiate hockey player.

“I had a fantastic four years, something I wouldn’t trade for the world,” Priskie said. “I’m really lucky to be able to play with a lot of former teammates that have mentored me and then try to do my job this year and mentor some of the younger guys. So, the thing for me is to leave a mark on this program.”

Craig Martin signed an amateur tryout contract on Tuesday with the Springfield Thunderbirds, the AHL affiliate of the Florida Panthers.

As for the other three, Fortunato had been receiving a lot of looks from NHL teams before his injury. He, along with Davidson and Shiplo, could possibly sign entry-level contracts with professional teams.

While they leave without any titles in their senior year, the seniors are the main core that brought this team back to the Quinnipiac standard after last season – and leave it with Quinnipiac finding its identity once again and with a bright future for this young Bobcats team.

“[The seniors] do all of the right things off and on the ice,” Pecknold said. “You know for us, we are a culture-based program. We don’t have five first round draft picks and fifteen draft picks. We have some and we definitely have talent, but we have to win with our culture and that character that they display. We had great leaders this year and I was happy with how they taught the freshmen how to do it the right way.”