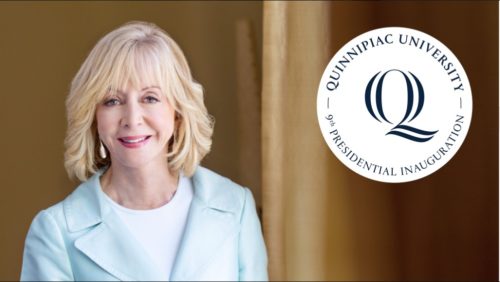 Judy Olian has been serving as Quinnipiac’s president since July 1, 2018, but 10 months later – May 1, 2019 – she will officially be sworn in at a ceremony promising inspiration, intellect and an inauguration focused on the future.

“This is our future at the university under new leadership,” said Monique Drucker, vice president and dean of students. “This is a time where we can honor that transition, we can recognize the excitement that’s moving forward and what we have to celebrate.” 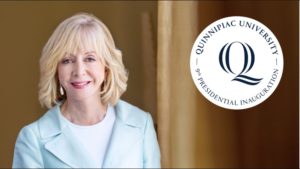 The official inauguration, which has the theme of “university of your future,” will take only an hour, according to Bushnell, but the committee has planned an itinerary of festivities that will last much longer.

“It’s not just a boring ceremony,” Natale said. “There’s going to be a lot of fun elements–a chance for everyone in the university–students being the biggest part of that.”

These “fun elements” include a food drive, an “Innovation Expo,” a “Taste of the Arts” presentation, TedxQuinnipiacU talks, a reception dinner and faculty talks. The festivities begin on Monday, April 29, with the “Be Kind Leave Food Behind Drive.” Tuesday, April, 30, will feature the “Taste of the Arts,” “Innovation Expo” and TedxQuinnipiacU. The event concludes on Wednesday, May 1 with the official passing of the “chain of command,” a reception and faculty talks.

The entire Quinnipiac community is invited to the official inaugural ceremony which will be held at People’s United Center on the York Hill Campus.

“We are definitely encouraging students to attend because it’s a rare event,” Bushnell said. “It will be the first one since Lahey.”

Natale, who described the event as “historical” encouraged all students to come to the ceremony because of what it represents.

“It’s really exciting to have this change of power, inaugurating a woman president– our first female president,” Natale said.

Following the ceremony, there will be a reception at the Rocky Top Student Center for “everybody” to attend.

“When I say ‘everybody,’ I say everyone who was invited to the inauguration which is the whole world,” Bushnell said. “Faculty, staff, students, alumni– anyone who wants to attend that is welcome.”

The day will close with faculty talks from three Quinnipiac professors.

“The entire event has the theme of the university of your future and these three faculty–Khalilah Brown Dean, Fred McKinney and Dana White– will be touching on their coursework and how it relates to the future,” Natale said.

A “Taste of the Arts”

A “Taste of the Arts” will feature Quinnipiac’s theater, music, visual arts and game design programs, but unlike the inauguration, seating will be limited.

The event, which will take place at the Theater Arts Center on Sherman Avenue, will feature a student art exhibit, a music and theater showcase and an interactive station displaying student-made video games.

Kevin Daly, director of the theater program, said student art and student created games will be on display in the lobby of the Theater Arts Center on Sherman Avenue. In the Black Box Theater, there will be a 45 minute showcase of theater and music students, which will include the student orchestra, jazz band, chorus and the performance of a short comedy, “Sure Thing.”

“There is a vibrant visual and performing arts community of students and faculty growing at Quinnipiac,” Daly stated in an email. “It’s really exciting that our students will get showcased during the inauguration.”

The “Innovation Expo” is a chance for faculty and students from all nine schools to show off the work they done here at Quinnipiac. It will take place in the piazza and the meeting rooms in the Carl Hansen Student Center.

Bushnell said President Olian will be hosting numerous guests and other university presidents from around the world. “The Innovation Expo,” like a “Taste of the Arts” will demonstrate the talents of Quinnipiac students across the disciplines.

“It’s the way for outside guests and visitors to be reminded of what a high quality education looks like here,” Bushnell said.

Licensed TedX talks will take place in the Buckman Theater on April 30. Drucker co-chairs the committee in charge of organizing the TedX talks.

“We are really excited about having the opportunity for the people in the Quinnipiac community to be showcased for TedX,” Drucker said.

As of now, Drucker and the rest of her committee have narrowed the field of over 50 applicants, 23 of which we students, down to four finalists whose talks are currently in the final verification process. Of the four, Drucker said two are students, one is an alumni and one is a faculty member. Drucker refused to give a glimpse into the topics, but said they reflect the theme of “university of your future.”

“We wanted it to be broad enough to give them lots of room to come up with [a topic],” Drucker said. “But we really wanted to align it with the university of your future and I think we achieved that.”

“We’ve got a set design,” Drucker said. “We are really hoping to do some work in the theater to give that a little bit of a lift for this event.”

Anyone in the Quinnipiac community is invited to attend, but under TedX guidelines, only 100 people can be in the audience. However, the event will be livestreamed for countless others to witness. Drucker encourages all students to watch the Ted Talks, but at the very least, to get involved in the inauguration in some way.

“Be a part of it,” Drucker said. “It’s an invitation. Respect where we’ve come and where we want to go.”

One of the committees involved in planning the inauguration is composed of students from organizations across campus. The idea of the student involvement committee came from Drucker, who said it is always her priority to get students involved.

“Anything I can serve on and bring a student to be part of, I always try,” Drucker said. “And this one was an easy sell.”

One of the chairs of this subcommittee is Sean Dacey, a senior computer information systems major and president of the Student Programming Board.

Dacey said the role of his subcommittee, which meets once a month, is to spread awareness about the event and to encourage students to come and get involved. He said they are working on tabling, t-shirts, raffles and other giveaways to get students excited about the week of events.

“I think it’s a really important event,” Dacey said. “Almost historical for our campus, to see a new president take her role. It’s important that we help represent the student body and show her that we are also invested in the university.”

If you want to get involved in the inauguration but aren’t a part of the committee, Dacey said there are opportunities for you too.

“There’s going to be volunteer opportunities for students to help throughout the week,” Dacey said. “Really just attending is the best way to be involved–to experience all the lectures, the events and all that fun stuff we have going on.”

President Lahey’s lengthy tenure at Quinnipiac meant three decades of consistent leadership but it also means President Olian’s inauguration is the first one in a long time.

“We had president Lahey here for 31 years,” Natale said. “He did a lot of wonderful things. Now it’s the changing of the guard, a changing in leadership to really introduce President Olian more officially to the campus and to the greater community.”

While the festivities are celebrating President Olian, the committee leaders all agreed that Olian said she wanted the celebrations to be about the students.

“President Olian has been very clear that even though the inauguration is about her in one way, she wants to use it as a way to make Quinnipiac shine,” Bushnell said. “Judy was very emphatic that even though it is her inauguration the whole purpose is it to show off Quinnipiac and what a great university it is and how talented our faculty and students are.”

There will be costs associated with the ceremonies but Bushnell said they are nothing that the “regular operating budget” cannot handle.

“We don’t share numbers specifically, but I can tell you looking at this there is not a whole lot of expense in most of it,” Bushnell said. “The inauguration itself and the reception will obviously cost money but it’s not a big number.”

Natale said the planned schedule of events aligns with the standard for similar ceremonies at other institutions.

“There’s pretty much a protocol in the higher education world for this sort of event and we are very much in line,” Natale said.

A formal invitation will be sent via email in the coming weeks. To register for a specific event visit go.qu.edu/inauguration. Drucker said that the events are the week before finals but nonetheless she promises students it is worth finding time to come to at least some part of it.

Come, be a part of this, join us, be with us, stand next to us,” Drucker said. “Because this is about you. This is about how we as leaders of the institution and how our president will shape it but we can’t do it without you.”