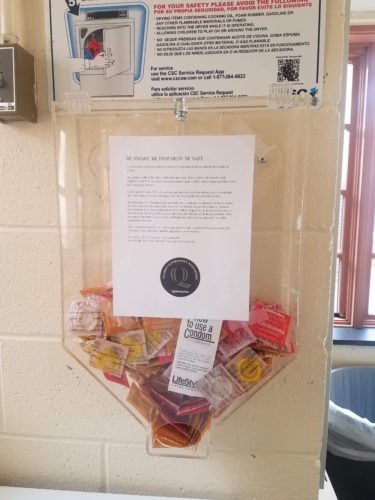 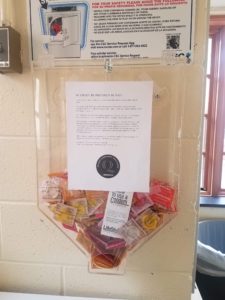 In an effort to make this a reality, the organization has installed two condom dispensers inside the Commons residence hall. This pilot program will encourage the practice of safe sex and prevent the spread of sexually transmitted diseases.

The program began on Wednesday, March 27, and will continue until Friday, May 3.

Residential Life sent out an email to the student body stating that Commons was chosen for the pilot program because of its high concentration of first-year students.

Junior nursing major Kaitlyn Berlangi said that she finds it to be a positive thing that SGA has started this program for the student body.

“I definitely think it’s beneficial just because it ensures safe sex and it’s cheap,” Berlangi said. “You’re not paying for it, it’s there. I don’t know if people would try to take all of them, but I think it’s a good idea. It’s the same as going to the health center, but I feel like it’d be less uncomfortable around other students.”

Junior legal studies major and former junior class representative Hope Estrella said she was inspired to start the initiative after discovering that sexually transmitted diseases were on the rise in college-aged populations because students were not using condoms during sex.

“The main thing students should gain from this is that sexual health is important. If you are using birth control that is a great first step, but it doesn’t protect against STDs,” Estrella said. “This is an important conversation to have and it can be uncomfortable at times, but it is definitely worth it to have the conversation.”

Estrella said that Commons is a good place for SGA to have started the program.

“We had members on SGA who lived in Commons of both sexes and it would be easy for them to monitor the pilot program from within Commons,” Estrella said. “We had to get permission from Residential Life first and after they gave us the okay we started to install them.”

“Residential Life assisted with identifying the target population for this pilot project, and we also suggested the location of the dispensers,” DeVilbiss said. “Residential Life sent a few emails to residents regarding the project. Later in the semester, there will be an assessment of the project that Res Life will also help implement.”

Although Estrella began the process for adding the program to Commons, the initiative was later handled by junior legal studies and economics major and class of 2020 senator Julia Schade and physical therapy major and junior class president Anna Nardelli.

“After [Estrella] had to resign due to her internship, we didn’t want all the hard work and time she put into this to be a waste and have nothing to come out of it,” Nardelli said. “Julia and I decided to pick up the work because this is for the benefit of the students and we wanted to be able to provide this resource, and promote safe sex against STDs.” 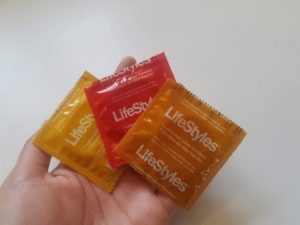 [/media-credit]Nardelli said that she and Schade wanted students to be aware of the program so they sent emails to Commons residents and other residents on campus.

“We hope that students are mature enough to respect these dispensers as a resource, recognize the importance of safe sex, and bring awareness to STDs on college campuses,” Nardelli said.

Schade said that she and Nardelli wanted to keep the initiative within the junior class which is why they lead the remainder of the program’s development.

“I think that this is a very important initiative because with STDs on the rise, especially among college students, students should take the proper precautions to try and reduce their risk of getting a STD,” Schade said.

The condom dispensers were purchased by Campus Life, they were installed by facilities and the condoms were donated by the Health Center, according to Schade.

Christy Chase, director of student health services, said that although the health center has always provided condoms for students she believes having them within the dorm buildings would be better as far as accessibility and privacy.

“We offer free condoms [in the health center] all the time, so we also will put out in our alcove that area is open at night even when we’re closed,” Chase said. “But I think the initiative to have them in the dorms is great because I don’t think unless people are planning ahead for a sexual encounter, then they may be in the moment and can at least go somewhere in the dorm is more accessible and I’m all about preventing STIs.”

The dispensers are located in the laundry rooms within the Commons building, but there was discussion before about placing them in the bathrooms instead. Yet that idea was declined due to greater risk of vandalism, according to Chase.

“There was concern about vandalism, that was a big thing so let’s hope people aren’t breaking them because that’s going to be very detrimental to the whole program,” Chase said.

Chase said that if this program proves to be a success then the next steps would be to add more dispensers in other dorm buildings, although the amount that will be included will come down to the amount of funding available.

“Every month we are able to get a certain amount of condoms from the Department of Public Health for the State of Connecticut. So I had offered to donate a portion of those to SGA to fill the condom dispensers,” Chase said. “I had also, when I first met with [Estrella], given her the contact of the state and told them to reach out as well to see if they can get free condoms from the state to be able to put in there because I don’t want to give them all of ours and then we don’t have any.”

“I am hoping that students become more aware of this issue and the dangers that can be associated with sexual health,” Schade said. “With this program, we’re hoping to decrease the spread of sexually transmitted diseases on our campus.”