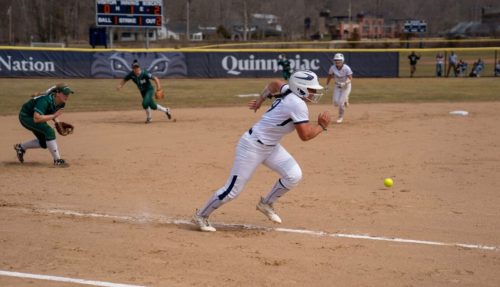 As the first game was winding down, it seemed like the most exciting moment of the day may have already occurred. Manhattan had one runner on third with only one out, trailing by just two runs in the fifth inning. 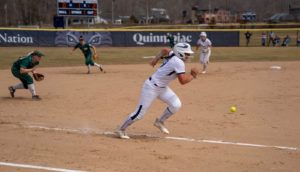 [/media-credit]A fly ball to left field seemed like it had a good chance to drop, but Quinnipiac freshman outfielder Danielle Sorenson made a great play, catching the ball and gunning straight to home to turn a double play and end the inning without allowing a run.

That play helped to secure a 2-0 victory, but still things came down to the wire. In the top of the seventh inning with two outs and the bases loaded, Quinnipiac senior pitcher Kendall Brundrett delivered a full count pitch that was driven to shallow right field.

Quinnipiac junior outfielder Megan Dyson came in to make a play on the ball, failing to communicate with junior second baseman Rachel Marchuk. The two nearly collided, but Dyson managed to record the out and seal the first game as a win.

The second game had much more scoring than the first. After a groundout to start the game, Manhattan’s senior infielder Lauren Pitney hit a shot to dead-center to put the Jaspers up 1-0 early.

Quinnipiac couldn’t answer in the bottom of the first, but after a quick top of the second, it responded in dominant fashion in the bottom half of the inning despite the offense looking doomed from the start.

Freshman infielder Bridget Nasir walked on four pitches, but that plate appearance proved to be all for nothing just moments later. Freshman catcher Lo Yarnall hit a fly ball to the second baseman, and Nasir made a poor base running decision that resulted in a double play.

Despite the two early outs, Quinnipiac came roaring back. After putting some runners on base, a passed ball resulted in a run that tied the game at one. A second passed ball advanced runners to second and third base, which was followed by a Marchuk double to left field that scored both runners.

Senior designated hitter Rebecca Drake doubled immediately after, scoring Marchuk and putting another run on the board. This was immediately followed by yet another RBI double, this one courtesy of senior outfielder Erin Larson. By the end of the inning, the score read 5-1 in favor of the Bobcats with all five runs coming in the bottom of the second inning.

After a quiet third inning, Manhattan got the scoring going once again in the top of the fourth. Freshman pitcher Brooklyn Maguire loaded the bases, then walked the next batter to bring in a run. With the bases still loaded, Manhattan junior catcher Morgan Sgarlata doubled to left field, scoring all three runners and evening up the score at five.

After the three RBI hit, Quinnipiac brought in freshman pitcher Lauren King, ending Maguire’s day after 3.1 innings pitched. After walking her first batter, King did a good job to stop the bleeding, forcing two quick outs and ending the inning.

The fifth inning was another quiet one, but Quinnipiac would eventually capitalize on its opportunities and score the final few runs of the game.

In the bottom of the sixth, it was Drake again who doubled to left, pushing a base runner to third as well. Larsen grounded to third base, and the runner on third was sent home. In a close play, she was called out at the plate for the second out of the inning.

That left runners on first and second with two outs, and that’s when freshman infielder Alexis Otero decided to play hero. She stepped up to the plate and blasted a three-run home run to left field, sending the crowd into an absolute frenzy and putting the Bobcats up 8-5 over the Jaspers.

King closed the game out well in the top of the seventh, retiring three of the four batters she faced to earn her fifth win of the season. The next most wins for any pitcher on Quinnipiac this season is one.

No coaches or players were available to speak with following the game.

Quinnipiac has a quick turnaround, as it plays another doubleheader against Saint Peter’s, the first game starting at 12 p.m. on Sunday, March 31 at the QU Softball Field.