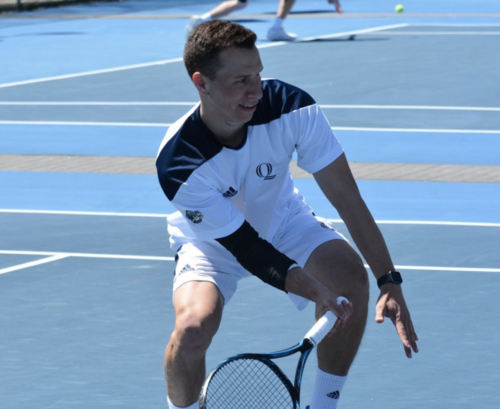 In its first home game since Oct. 6, the Quinnipiac men’s tennis team defeated the University of Connecticut Huskies (7-13 overall, 0-2 AAC) 5-2 on Saturday afternoon in Hamden.

The Bobcats (5-9 overall, 2-0 MAAC) returned to Hamden following a five-game trip to California. In their efforts today, the Bobcats ended the five-game losing streak that transpired on the west coast. 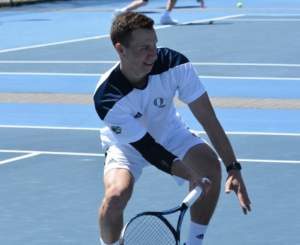 [/media-credit]“It’s great,” Quinnipiac head coach Chris Pappas said of the team’s home-court advantage. “There’s just so much energy where our courts are located and the amount of spectators you get and the other athletic events going on. I think it just provides a lot of energy which allows us to feed off of it.”

Despite losing five straight, Pappas knew his team was due for a win and that the morale was not dwindling.

“I think the morale was good regardless,” Pappas said. “We played five really, really, really good teams. We played well, and we competed in every one of those matches. So we weren’t down, and we knew we were playing some good quality competition.”

The Bobcats took charge early and kept the intensity up throughout the out-of-conference match. Junior Patrick Cachapero and sophomore Hielke Moore started off the day with a win in No. 2 doubles.

The Huskies kept it close, though, as they won No. 1 doubles over freshman Aleska Martinovic and junior Austin Yannone. Quinnipiac took back the lead and captured the final doubles game, earning one point as junior Axel Stern and freshman Alester Magalit won No. 3 doubles.

Out of the gate, the Bobcats looked ready to go and brought the same energy that Pappas had talked about during the team’s California trip.

“We knew if we kept playing that way,” Pappas said, “and we got the opportunities to play matches like this, we would give ourselves a good chance for a win.”

The singles matches resulted similarly for Quinnipiac. With a point on the board already, the Bobcats only needed three singles wins to clinch the victory.

The first singles match to finish, No. 2 singles, put Quinnipiac in a 1-1 deadlock with Connecticut. Martinovic lost a hard-fought match to sophomore John Holtmann.

Quinnipiac bounced back quick, though, as senior Freddie Zaretsky secured a win in two sets over sophomore Yili Zheng in No. 1 singles. Cachapero, No. 5 singles, and Moore, No. 4 singles both won matches, with Moore cementing a win for Quinnipiac.

The teams split the final two singles matches with Magalit falling in No. 3 singles and Yannone winning in No. 6 singles.

“I thought we played well in California, just played some really good teams,” Pappas said. “Good to get back here and get a win.”

With their first win since March 2, the Bobcats will look to build momentum off this victory going forward. The team is set to face Harvard in Cambridge, Massachusetts, tomorrow, Sunday March 31 at 4 p.m.