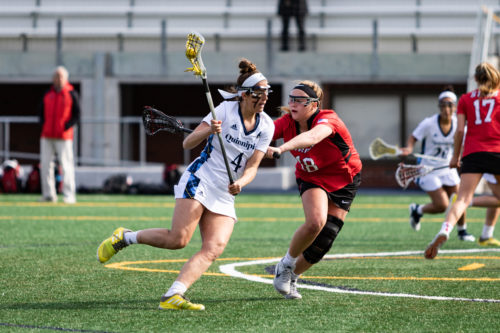 That was the feeling in Hamden this Wednesday afternoon, as the Quinnipiac women’s lacrosse team (3-7 overall, 0-2 MAAC) suffered a one-goal loss to the Fairfield Stags (6-3 overall, 1-0 MAAC). The one-goal loss was a familiar result for the Bobcats, who just four days ago lost 10-9 to the Marist Red Foxes.

Quinnipiac was unable to come through in crunch time once again, as the Stags defeated the Bobcats 9-8. In an extremely back-and-forth game that had aggressiveness at both ends, Fairfield took control late and came out victorious despite a strong surge by Quinnipiac in the final minutes. 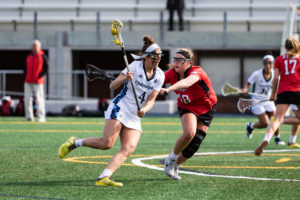 Even though Quinnipiac didn’t get the win in its second conference game of the year, it didn’t go down without a fight. Goals went back and forth the entire first half, as the score was actually tied 5-5 at halftime.

From there, Fairfield took control in the second half and played a more complete game. Sophomore midfielder Kelly Horning led the way for the Stags, as she had a hat trick and attacked well all day. Graduate student midfielder Brooke Gallagher had two goals of her own, as did junior midfielder Meaghan Graham. Fairfield’s scoring came from all over the midfield, as its depth at the position and wealth of scoring helped separate the Stags.

Quinnipiac had a hat-trick scorer as well in junior midfielder Megan Szawlowski, who has been the bright spot for the Bobcats all year. Szawlowski has been a pleasant surprise since she transferred this year from Central Connecticut. She has been outstanding for the Bobcats thus far, as she netted three goals and an assist today. That gives her 21 goals and 10 assists in just 10 games played this year.

Even though this game had a lot of strong scoring from top midfielders, there was also a lot of strong hits. Four yellow cards were assessed in the game, and Kotowicz made sure the girls knew to keep composure.

“We talk a lot about sportsmanship,” said Kotowicz. “I just told them at halftime to keep your heads level no matter what, and remember sportsmanship above all else.”

Following the grit of the first half, the second half was much more focused on efficiency. Both teams focused on getting quality scoring chances rather than quality hits, and that resulted in a lot smoother of a half.

This half didn’t lack compete or determination, but it was much more cerebral on both ends. That was on display when Quinnipiac didn’t give up down 9-6 with just five minutes remaining in the game. The Bobcats seemed to have little momentum, however that all changed when the score was 9-8 after quick goals from freshmen midfielders Gabby Beckett and Maddie Deegan.

“I wish I knew what sparked that late run,” Kotowicz said. “The girls have done a great job all year of hustling no matter what and playing to the final whistle, and this game goes with last game as just another example of us not giving up.”