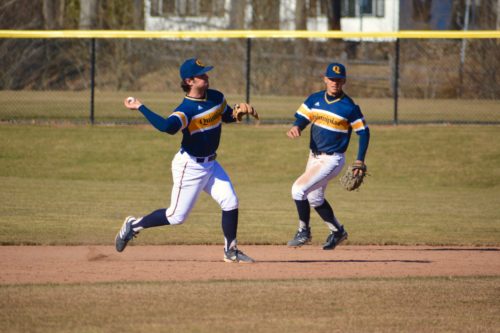 The game started full of offense as the teams combined for five runs in the first three innings.

Quinnipiac graduate student catcher Anthony Cruz gave his team an early burst of energy as he connected with a pitch and sent it into the gap. Junior outfielder Andre Marrero drove in Cruz with an RBI single giving Quinnipiac the early lead. 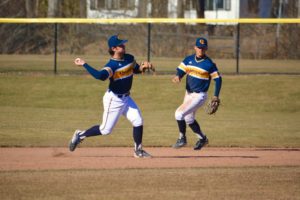 [/media-credit]“Just trying to go out and repeat what I did against Saint Peter’s,” Marrero said. “I wanted to be ready to go and just sit on fastballs and I was able to do that.”

The Rams would take back the lead scoring a run in each of the next two innings.

In the bottom of the third, Quinnipiac used its strong suit with small ball situations to score two more runs. After a double from freshman infielder Kyle Maves, Cruz advanced him with a bunt single.

“We know we have [small ball IQ] so we try to use it as much as we can,” Marrero said.

Marrero, who extended his hitting streak to eight games, drove in his second RBI of the game with a single, keeping runners on the corners.

Sophomore outfielder Derek Kasperzyk, who substituted in for third base, placed down a perfect safety squeeze, scoring a run and reaching first base for a hit.

“[Kasperzyk] had a great opportunity there because he has speed and he’s able to handle the barrel a little bit,” Quinnipiac head coach John Delaney said. “Perfect situation with the first and third, to be able to do a safety squeeze there and obviously with his speed is able to turn it into a hit.”

Freshman first-baseman Michael Kohn drove in the final run for Quinnipiac in the fourth giving it a 4-2 lead.

“We wanted to try to continue scoring and be the best we could,” Marrero said. “We had some base runners here and there, we just didn’t get the big hit.”

The sixth and seventh innings gave the Rams some life as they singled in a run and then tied it up with a sacrifice fly. The momentum started to turn their way as the teams entered the late stages of the game.

Both teams had a handful of opportunities to gain a lead and hold it but were ultimately snuffed out.

“We were one big hit away, had a couple of opportunities with guys on base,” Delaney said. “That eighth inning where we have runners at first and second, one out, we get a hit there and we score that run.”

In the ninth inning, Quinnipiac let the first two batters reach base and put itself in a nightmarish jam. Rhode Island would eventually load the bases but with two outs on the board. 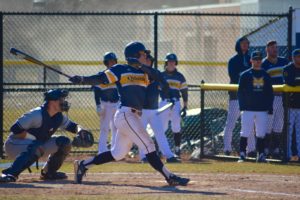 [/media-credit]Senior reliever Andrew Workman had nearly escaped the late jam by inducing a ground ball for the hopeful final out. However, an error was committed on the play allowing Rhode Island to take a one-run lead heading into the bottom of the ninth.

Quinnipiac’s last attempts to salvage a run were futile as Rhode Island shut them down and secured the win.

“In the position, we’re at with the couple of injuries we have, it’s the opportunities that we just have to maximize as many chances as we can,” Delaney said. “We don’t have as many options right now, where if we miss that one opportunity we’re going to be able to get another opportunity.”

Quinnipiac will next face Dartmouth on Wednesday at 3 p.m. back on the QU Baseball Field.