Murphy’s Law: Dancing with the Devils 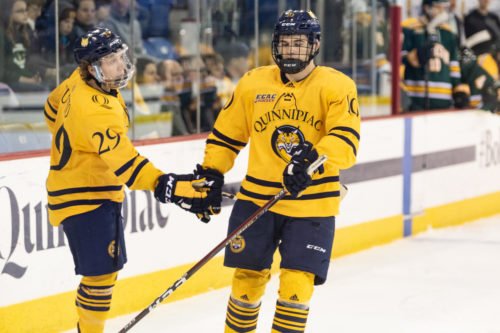 Two games and two blown leads in the third period enabled Brown to come into Hamden and sweep top-ranked Quinnipiac in the conference quarterfinals, giving Quinnipiac its first home playoff series loss ever.

“I thought the Brown series, while I give Brown credit, they played well, we just didn’t play well,” Quinnipiac head coach Rand Pecknold said. “We weren’t hungry, we weren’t relentless, we didn’t play to our identity.”

Quinnipiac has had some time to reflect and regather itself after being the victims of that stunning sweep. It now turns its focus on the NCAA Tournament and Arizona State, who will be the team’s opponent in the Midwest Regional semifinal. 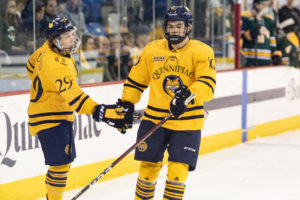 [/media-credit]It’s safe to say Quinnipiac didn’t end ECAC Hockey play on a high note. But it has a chance to prove the Brown series was a fluke by competing for the national title.

“It’s all preparation,” freshman forward Wyatt Bongiovanni said on what needs to change heading into the weekend. “You got to change some things in preparation and I think those two [Brown] games, we lacked details as a team. I think that we clean up in areas like winning our shift and getting back to our identity.”

Quinnipiac has had plenty of time to adjust and prepare for Arizona State. It will have had a two-week break heading into the game on Saturday, as it joins Harvard, Clarkson and Cornell as the four teams representing ECAC Hockey in the tournament.

“We’ve had two weeks to prepare,” Pecknold said. “We cleaned up some things with our penalty kill, we’ve had a lot of reps and put in some new things for our power play to give them new wrinkles, some different looks.”

On the other side of the script, Arizona State has had some setbacks as well. And probably are in a much worse state heading into the postseason.

As a result, Arizona State has not played a game in nearly a month. It finished its season getting swept soundly by Minnesota on March 1 and 2 by scores of 5-1 and 5-2. So the Sun Devils are heading to Pennsylvania ice cold.

“Not playing in five weeks, I think they’re not going to have their game legs right away,” sophomore Odeen Tufto said. “That’s something that we have to recognize and that first five minutes is going to be huge. Not only if we don’t score but getting the momentum to start, that’s going to be important.”

In addition, the Sun Devils will be without sophomore defenseman Jacob Wilson after he was suspended two games in the first game of the Minnesota series. And sophomore forward Johnny Walker, the team’s top scorer, will be playing in his first game after dealing with an ankle injury that sidelined him the last two games.

The biggest storyline for this game lies in between the pipes. Quinnipiac junior goaltender Andrew Shortridge and Arizona State junior goaltender Joey Daccord both had outstanding 2018-19 seasons. Both are finalists for the Mike Richter Award, which is given to the best goaltender in NCAA hockey.

Shortridge’s season has been a spectacular one. He leads all goaltenders in goals against average, with a career-high 1.51 GAA, and leads the nation in save percentage as well, 9.41 percent. The Anchorage, Alaska native comes into the tournament with a 17-6-2.

Daccord has enjoyed a much-improved junior year. After a sophomore season that saw him register an 8-19-5 record to go with a 3.51 GAA and a .909 save percentage, Daccord has improved mightily, going 21-12-1 with a 2.36 GAA and .926 save percentage. He also has posted seven shutouts on the year, which is tied for first in the country.

Not only that, but Daccord was praised by Pecknold and a number of the players about his puck-handling ability and how what adjustment the team has to make in order to make sure the Sun Devil goalie doesn’t burn them.

“[Daccord] is the best puck handler in college hockey by far,” Pecknold said. “He’s the best goalie I’ve seen in a while at our level, so we have to be aware of that. It just changes the game a little bit, if you’re napping a little bit, there’s that 110 foot pass and there’s that breakaway.”

The two teams have become fairly familiar foes. Before this season, the two teams had met in the regular season for three straight years. In five games played, the Bobcats own a 3-1-1 record over the Sun Devils.

But the Bobcats have experience that the Sun Devils don’t have, specifically in the NCAA Tournament. The group of seniors were apart of the 2015-16 team that made it all the way to the national championship, falling to North Dakota 5-2 in the finals.

“We need them to play well,” Pecknold said of the senior class. “They’ve been to the Frozen Four, they’ve done a lot of good things, they’ve been in the NCAA Tournament. They need to help the younger guys prepare this week and prepare for Saturday’s game.

“In the end, the most important thing is they need to play well on Saturday. If they play well, it’ll just permeate down [the lineup].”

There’s no more room for mistakes for the Bobcats. It’s pretty simple–you win, you move on. You lose, you go home. Four wins and you’re crowned national champions. That journey begins with Arizona State on Saturday at the PPL Center in Allenstown, Pennsylvania, with gametime set for 7:30 p.m.

“It’s a tough matchup, but we’re excited for it” Pecknold said. “They play a hard, heavy game and they’re physical and they work hard. For us, we need to worry more about ourselves. Certainly we’ll worry about them a little bit, but we’ve got to play to our identity and almost have a game similar to that against UMass when we beat them here at home 4-0. That’s the game we need on Saturday night.”