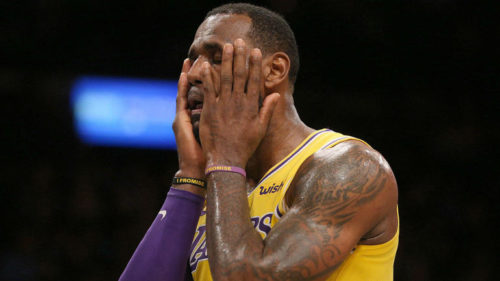 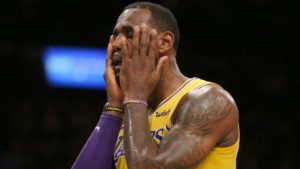 [/media-credit]The Los Angeles Lakers have lost 10 of their last 11 games and will miss the playoffs for the sixth consecutive year. The team was officially eliminated from the playoffs after losing to the Brooklyn Nets 111-106 Many expected the Lakers to at least make the playoffs after signing LeBron James this summer.

Laker’s President of Basketball Operations Magic Johnson deserves all of the blame for the team’s season. Johnson ruined the team’s chemistry by leaking their offers before the trade deadline for New Orleans Pelicans starting center Anthony Davis.

“We got off the phone with [the Lakers] and a minute after later, offers are out there,” a Pelicans source told The Athletic’s Shams Charania.

Lakers beat writer Brad Turner reported on his Twitter on Feb. 4 what the Lakers were willing to give up for Davis.

Johnson should have never entertained the offer because the Pelicans know that the Lakers’offer will be there this summer. It makes sense for the Pelicans to wait until the summer because the Boston Celtics have the most assets to offer as they have three first-round draft picks in the 2019 NBA Draft.

“The Celtics know the Pelicans are enamored with Tatum, whose potential to develop into a franchise forward dwarfs that any player the Lakers have to offer,” senior writer for Sports Illustrated writer Chris Mannix said.

Johnson made questionable signings this offseason. He decided to sign Stephenson, Rondo and McGee to one-year contracts. These players are not known for their shooting.

Rondo’s career three-point percentage is 31.4 percent, Stephenson’s is 31.5 percent and Mcgee’s is .087 percent. This is why the Lakers are the second worst shooting team in the league at 33.1 percent from three.

Fox Sports Radio host Colin Cowherd reported on his show “The Herd” on Mar. 7 what James said to people close to him back in January about the roster Johnson put together.

“LeBron told people close to him that this roster makes no sense,” Cowherd said.

James knows he needs to have shooters around him. He had the most success when he was with the Miami Heat because he played with Mike Miller, James Jones, Shane Battier and Ray Allen, all who are known for their three-point shooting.

Johnson tried to make up for the team’s lack of shooting at the trade deadline by acquiring Reggie Bullock and Mike Muscala.

These acquisitions have not worked out as Johnson expected.

Trading Muscala makes no sense if you’re barely going to play him. He is averaging 2.5 points in 11 games for the Lakers, only playing 9.3 minutes per game on average. Muscala was a solid bench play for the Philadelphia 76ers. He averaged 7.4 points per game in 47 games, playing 22.1 minutes a game.

The other mistake Johnson made was not listening to the coaching staff to keep Julius Randle and Brook Lopez.

According to Bill Oram of The Athletic, Johnson “ignored the pleas of the coaching that he retains the two bigs following the signing of LeBron James and instead added Javale McGee, Michael Beasley and Lance Stephenson.”

Randle is having the best year of his career with the Pelicans. He is averaging 21 points per game along with 8.7 rebounds per game and 3.1 assists per game. Randle would have helped the Lakers, as he is a player you can give the ball to in the post and get a bucket for you. The Lakers don’t have another player besides James that can do that.

Lopez is also having a good year for the Milwaukee Bucks. He is shooting 36.1 percent, averaging 12.5 points per game and is a perfect fit for the Bucks as he provides spacing for Bucks All-Star Giannis Antetokounmpo. He has made 167 three-point field goals this year, shooting 36.7 from three. The most three-pointers by a Lakers player this year is Kuzma with 105.3

There will be pressure on Johnson to get a star this offseason. I think the team will go after the Charlotte Hornets’ starting point guard Kemba Walker, Philadelphia 76ers small forward Jimmy Butler or Warriors center DeMarcus Cousins.

If the Lakers can’t get a superstar this offseason, then Johnson has failed because he is expected to land another superstar to play with James.