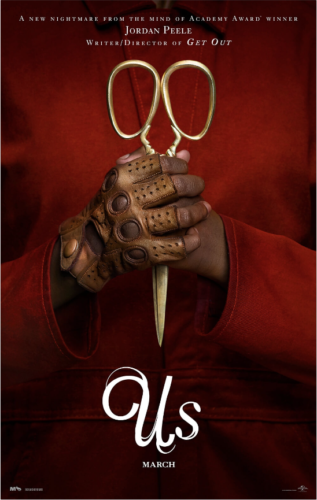 “Us,” the film by cinematic mastermind Jordan Peele, is a stunning achievement in film making. It was released in theaters on March 22. The film ponders the questions of who we really are and what lies underneath. 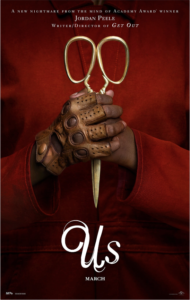 [/media-credit]This is Peele’s second horror film that he has directed, written and produced after 2016’s “Get Out,” which was a pop culture phenomenon, creating a dialogue about race, as well as many thinkpieces and memes. “Get Out” won the Academy Award for Best Original Screenplay and also became only the sixth horror film to be nominated for Best Picture. The stakes are certainly high for this latest film and I can confidently say that the film clears every hurdle.

Peele’s films tend to deal with societal issues and major themes, and “Us” is certainly no different. The film centers around a family of four who go on vacation to a beach house. However, per usual for horror films, this house has a dark past. Adelaide, played by Lupita Nyong’o, has a traumatic experience as a young child at the beach near the house. Young Adelaide wandered away from her father on the boardwalk and walked into a hall of mirrors. And what Adelaide saw there changed her life forever; herself in the mirror but it wasn’t a reflection.

Soon after arriving at the beach, Adelaide experiences a similar situation when she loses her son. She then begins to feel uneasy, and later that night tells her husband, played by Winston Duke, she wants to leave the home. But before the family can, things take a turn. A family appears in their driveway, a family whose members look exactly like them. From there we see the family fight for their survival against their oppressive abusers in every way possible.

Finally getting her due for a leading film role, Nyong’o, a previous Academy Award winner, shines ever so brightly. In a dual role with the complexity of a Rubik’s Cube, Nyong’o radiates a power that only a few actors have shown before. She transforms into her two roles and creates a haunting figure with a voice that will keep viewers, myself included, up for nights on end. This performance is by far one of the best horror performances I’ve ever seen on film.

The score by Michael Abels soars. It is hauntingly operatic. It does more than let the audience know when something is about to happen, it is another character in the film. It is alive and it wants you to know that.

The film’s script is one of the best released this year, so far. Peele has created a story that is as meaningful as it is haunting. Peele is so detailed and doesn’t miss a beat. Looking back on the events of the film there were so many signs of the impending disaster that, at the time, seemed insignificant. That is when you know you’ve seen a great horror film; when the signs were clearly there and you miss them completely.

The direction of the film is sharp and creative. Peele’s use of suspense, tone and symbolism is truly a masterclass of virtuosity. Peele works in the constraints of the horror genre and it results in a finished product that can be thought about outside of the horror genre. This film certainly places Peele in the upper echelon of horror and cinematic geniuses.

Peele wants to take a look at who we are. What lies behind the curtains, the makeup, the facades and the carefully curated Instagram profiles. And what is there is not something pretty. It’s dark and it’s suppressed. Who we really are has been seeping through the increasing cracks in the mold, dying to break free. The film is a detailed character study of us, average Americans. Seeing our true selves can be just as scary as some paranormal activity, a murderer or a killer shark.