‘More than a makeover’ 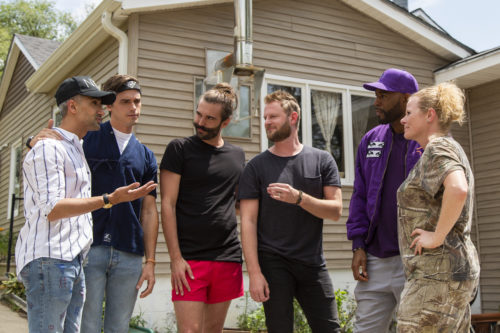 Before the five men of the “Queer Eye” crew appeared into her house, Jody, a 49-year-old correctional officer, only owned camouflage clothing and went hunting in her free time. Her husband, Phil, loves her but wants Jody to start loving herself first. And just like the birds in “Cinderella,” the men swarmed Jody’s daily lifestyle to offer some help.

Although the routine of positivity in “Queer Eye” is familiar to its returning audience, there is a new element of discovery. Each episode requires work from the viewer, as well as the Fab Five, to figure out what really is fueling these people’s bad habits – whether that be an all-instant ramen diet or a lack of showering.

Brown, in particular, sets the stage for delving deeper into each person’s life, who have the platform to open up more in this season than cases in the past. He gets Jody to open up about a life-changing tragedy that stopped her habit of self-love. In later episodes, he gets others to open up about lost loved ones, alcoholism and social anxiety. Brown is able to grapple with these issues with physical, therapeutic exercises that weren’t found in the seasons prior.

While this feel-good show teeters on the line of being too cheesy for some viewers, “Queer Eye” saves itself with its continuous effort to adapt. Among the Fab Five’s jokes and critiques of each case’s fashion sense, there is an understanding of what each persons needs. What worked for Jody wouldn’t have worked for Jess, a lesbian whose parents disowned her, and the Fab Five realized that. In scenes such as when Brown has a conversation with Jess about what being a proud black woman meant to her, “Queer Eye” proves just how versatile its queens are.

Season three did, however, miss the mark when trying to touch on deeper subjects, such as gun control policies. The scene between Jody and France discussing the topic felt staged and the conversation seemed to resolve itself too quickly. This was so unlike season one’s approach to controversial subjects, in which police brutality was discussed in a vulnerable and engaging way.

“The original show was fighting for tolerance,” France said in the first episode of the series. “Our show is fighting for acceptance.”

But in this season, fighting for acceptance didn’t seem necessary. All of the people appeared to be comfortable bonding with the Fab Five. While this is a win for the LGBTQI+ community, it does take some emotion and conflict out of the show.

“Queer Eye” also introduces a more diverse cast, which was a common critique of the previous two seasons among viewers. The prior two seasons took place in Atlanta, Georgia and only featured one woman. There is also not as much emphasis put on each person having a simple ‘happily ever after’ ending. Instead, the message of this season is more focused on self-care, as well as pushing the concept of gender roles and breaking free of any social limitations. It encourages each person to find their own happiness while still living with pain from their past.

Seeing each person find that happiness is what makes watching “Queer Eye” a pleasure. It’s the kind of reality television that blends together wholesome humanity and amazingly simple, but useful, lifestyle tips (can’t forget that French tuck!). It manages to stay fresh by pushing, for a moment at least, the boundaries of class, gender and sexuality with a gentle hand. Overall, the show satisfies a specific, but universal, need in the realm of feel-good television.