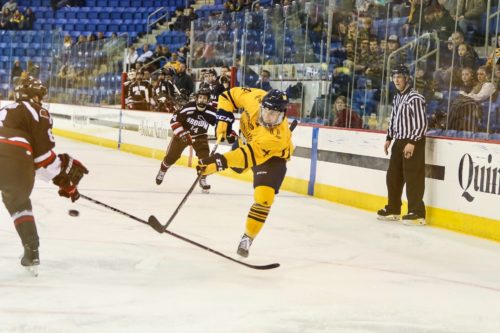 That’s how close the Quinnipiac men’s ice hockey team was to taking game one of the ECAC Hockey quarterfinals and putting itself in the driver’s side to punch its ticket to Lake Placid.

Instead, No. 1 Quinnipiac gave up the tying goal and was ultimately upset in overtime by No. 8 Brown on Friday night in Hamden, losing 2-1. Quinnipiac junior goaltender Andrew Shortridge made a career-high 38 saves in the loss.

[/media-credit]“I want to congratulate Brown, I thought they were the better team tonight,” Quinnipiac head coach Rand Pecknold said. “They deserved the win. Sometimes in the game of hockey it just comes down to want. And we’ve been great all year, we’re hungry, it’s a young squad, great character, great culture.

“Tonight, for whatever reason, we just didn’t seem to have the same fire as we’ve had all season long. We had enough [to win], and we just had a lot of kids that really struggled tonight and in the end, Brown wanted it more.”

After a scoreless first period, Quinnipiac junior defenseman Karlis Cukste opened the scoring in the second period, ripping a shot blocker side on Brown junior goaltender Gavin Nieto off the rush.

Brown had a chance to tie the game, after a Quinnipiac turnover in the defensive zone left junior forward Jack Gessert alone in front of Shortridge. His one-time attempt was met with the flashing pad of Shortridge.

With time dwindling down in the third, Brown pulled Nieto to add an extra attacker. When Quinnipiac failed its clearing attempt out of the zone, Brown junior forward Brent Beaudoin collected the puck and fired a shot on net that beat Shortridge glove side to tie the game and send it to overtime.

In the extra period, it was a lot of fatigued defensives on both sides, which opened up the game offensively.

“Really loose, I thought it was really loose coverage defensively for both teams,” Brown head coach Brendan Whittet said. “From watching it, it just seemed like it was back and forth and it was only a matter of time before someone got one.”

It would be Brown that was able to get the goal, as Gessert got his revenge on Shortridge. After the puck banked off the backboards, Gessert was able to jam it in short side, sending Brown into celebration with the overtime win.

Those shot totals heavily favored Brown, who outshot Quinnipiac 40-26. Part of that could have been the absence of senior defensemen Chase Priskie and Luke Shiplo, who both were suspended for the game for their altercations during the Yale game.

Shiplo will return to the lineup tomorrow, however Priskie still has another game to sit out.

“We made our own bed,” Pecknold said. “We made some bad decisions against Yale in the last game of the year and we paid for it tonight. In the end, we still had enough to win. We had plenty to win a game tonight. We need to be better, and we will be better tomorrow night.”

Brown now holds the upper hand in the best-of-three series. Quinnipiac will need to win the next two games if it wants to advance in the conference playoffs, while Brown only needs one more victory. Game two will be Saturday night at 7 p.m. in Hamden.