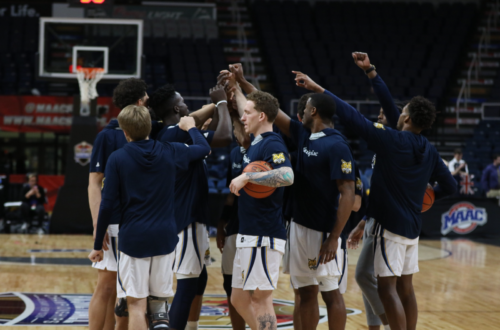 The way a story ends shouldn’t always determine if it was good or bad. Sometimes you can hear a great story, enjoy it along the way, then be dissatisfied with the conclusion. That’s the story of the 2018-19 Quinnipiac men’s basketball team. 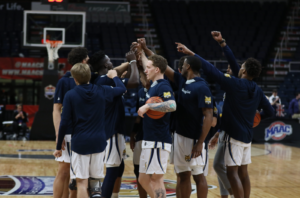 [/media-credit]“We didn’t reach our defensive potential [this season],” Dunleavy said after the Bobcats’ 98-92 season-ending loss to Monmouth on Saturday. “We’ve got to ask ourselves ‘Why?,’ and the group that comes back we’ve got to address that.”

Dunleavy was right – the Bobcats struggled on the defensive end this season. Quinnipiac allowed 72.1 points per game and only averaged 2.0 blocks and 5.2 steals per game this season, both down from last year (2.6 and 5.5, respectively).

When Quinnipiac needed stops this season, it simply couldn’t get them. Last year, guard Isaiah Washington ‘18 was the defensive anchor. He locked in and got stops when needed, and the Bobcats just couldn’t find that player this season.

Quinnipiac allowed over 75 points in 13 games this season, going just 6-7 in those games compared to 10-7 when allowing under 75.

Defense is the key to winning games going forward.

Of the nine players to log at least 200 minutes this season, only senior forward Abdulai Bundu (0.6) and junior forward Kevin Marfo (0.5) had a positive defensive box plus/minus rating. The next closest Bobcat was freshman guard Tyrese Williams (-1.0).

To seriously compete for a MAAC championship, the Bobcats need to improve those numbers. Iona, winners of four straight MAAC titles, had four players better than Williams this season. Iona’s fifth-best defender was on-par with Quinnipiac’s third-best overall and best perimeter defender.

Defense is what cost Quinnipiac its season in the loss to Monmouth. The Hawks only had five turnovers and shot 55.6 percent from the field.

“We had a very impressive offensive night, which this group can do,” Dunleavy said. “But we didn’t have enough answers defensively and rebounding the ball. Our scoring had been carrying us, trading baskets, we went on a little bit of a dry spell and they just continued their effort. This time of year you’ve got to get stops and that’s probably what we were not able to do.

“We could’ve easily won this game 92-91. That wouldn’t erase some of our deficiencies. The excuses are there, we’re young or whatever, but it’s got to get improved upon. That’s my job as the coach to figure out that plan.”

Before we move forward, I’d be remiss not to mention graduate student guard Cam Young’s season. Let’s just throw out the numbers. Young averaged 23.3 points and 5.0 rebounds per game, broke his own Quinnipiac single-season scoring record (699 points vs. 622 last year) and was named unanimous – yes, unanimous – MAAC Player of the Year.

Even though he essentially only played two years, Young can make a case that he’s the best player in program history. His career average of 19.1 PPG is the highest in Division I program history, he has the Division I record for most points in a game (55) and his 1,321 points rank in the top 10.

Young did all this while being the only consistent scoring option on the team. He was the focal point of every opponent’s defensive plan and he still got his.

“We tried to take the ball out of (Young’s) hands,” Monmouth head coach King Rice said after the win. “I told (my team) after our win the other day, we walked through it, and (Young) still got us for 33 (points).”

Despite all his accomplishments, the season still left a sour taste in his mouth.

“We had some ups and downs throughout the season,” Young said after the loss. “I don’t think we reached where we really wanted to as a team.

“Right now I’m not really feeling too well about it, but maybe a few years from now I can look back and be OK with what we did this year.”

It’s understandable after a tough loss to end your career. For now, Young can focus on playing professionally before reminiscing about his Quinnipiac career. I’m betting it’ll be a long time before we see another guy like Young in Hamden, though.

Moving forward, Dunleavy has to find bodies to replace Young. No single player is going to give what Young did these past two seasons, it’ll be a group effort next season. 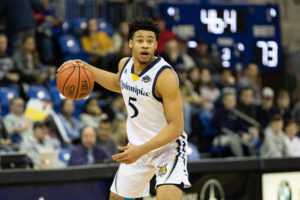 Williams, Kelly and Rigoni figure to be the focal points of the offense. Williams showed flashes of brilliance as a freshman (23 points in win over Rider, 12 games in double digits), but was largely inconsistent on offense (seven games with five points or less). Kelly will remain the floor general (4.6 assists per game in 58 career games) and will be asked to maintain his scoring.

The guy the Bobcats will need more from is Rigoni. As a freshman, the Aussie shined, averaging 9.8 PPG while shooting 45.5 percent from deep. While his scoring increased to 10.4 PPG this season, his efficiency decreased (38.5 percent from deep) and he had 10 games scoring five points or fewer (three scoreless games). Quinnipiac needs a lot more consistency from Rigoni as he becomes an upperclassman next season.

As for incoming freshmen, the Bobcats will add 6-foot-7 forward Brendan McGuire (Mineola, New York) and 7-foot center Seth Pinkney (Warminster, Pennsylvania). Pinkney played high school ball with Pickron, so there’s some familiarity there. Current freshmen guards Savion Lewis and Matthew Balanc both redshirted this season, so they will be available for their first game action next fall, too.

Next year will be a lot different, no doubt about it. The offense ran completely through Young, and now the Bobcats lack a clear No. 1 option. Williams is the most likely candidate to step up, but it’s most likely going to be a game-by-game adjustment.

So, while the 2018-19 season was a positive one, it was also a greatly missed opportunity. Who knows when another player like Young will come around? That’s the fun of college basketball, though. Players come out of nowhere and make names for themselves.