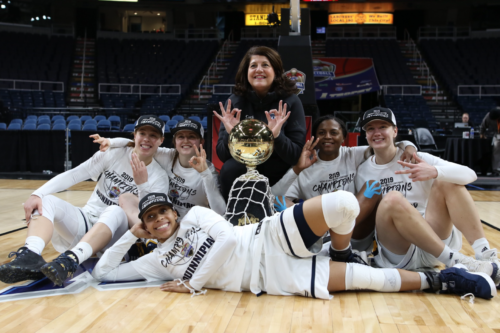 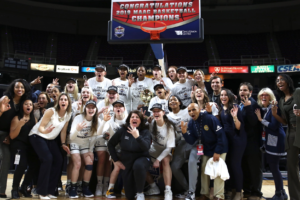 All teams who have pulled off a three-peat.

For the third season in a row, the Quinnipiac women’s basketball team is bringing home the hardware, after defeating Marist, 81-51, for the second straight year in the MAAC championship game. The Bobcats completed back-to-back undefeated conference seasons and will go to the NCAA tournament for the third year in a row.

“Thirty-five [minutes] out of a 40-minute game was perfection for us,” Quinnipiac head coach Tricia Fabbri said. “We withstood the storm for the first five minutes when Marist came out. Just a great, great championship game, great three games for us up here, playing at such a high level and an incredible way to close it out [with] the MAAC championship.” 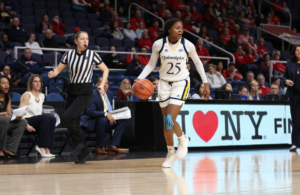 [/media-credit]Marist came flying out of the gates, sinking its first six shots and leading 20-18 at the end of the first quarter. After that, however, Quinnipiac locked in defensively and Marist shot 31 percent for the rest of the game.

“We talked more going into the second quarter,” McClure said. “I felt like we were more confident in reading off of each other, especially on the defensive end. Talking and giving each other the confidence to lock up and secure whoever we were playing.”

Quinnipiac jumped out to a 8-0 start to the second quarter, thanks to back-to-back 3-pointers by senior guard Edel Thornton (16 points). The Bobcats never looked back after that point, outscoring Marist 20-9 in the second quarter to take a 38-29 lead into the half.

The second half was another dominant showing by the Bobcats, outscoring the Red Foxes 43-22 in the final 20 minutes en route to the 81-51 championship win.

“I thought Edel Thornton led us to victory today,” Fabbri said. “She played the game that we needed her to play in dictating offense and defense. And shooting 4-for-8, you don’t have a 40-point win with just one person playing well, this entire team played well. And Edel played the best game of her season, one of her best games of her season.”

Quinnipiac heavily outplayed Marist in the paint, securing 28 second-chance points as opposed to Marist’s five. The Bobcats also won the rebounding battle 50 to 27.

“We emphasized boxing out because the game before, Marist did get a lot of [offensive] boards against Rider,” McClure said. “That was a big key for us going into this game, to box out and pursue those [offensive rebounds].”

Here's the and-1 from @jfay__24. Two offensive boards and then the finish. Quinnipiac has Marist on the ropes… pic.twitter.com/IbO2aKBdxp

The group of five seniors, including Fay, McClure, Thornton, Strautmane and senior guard Brittany Martin, have been an integral part of the program’s success. They will finish their MAAC careers having won 52 straight games and winning three championships.

“It’s awesome,” Fay said on winning the MAAC title as a senior. “Obviously we’ve had a lot of success here over the years, but to go out with a championship, I don’t think there’s any better way.”

While Fay, McClure and Strautmane received All-MAAC honors this season, Fabbri felt as though those honors do not do the individuals enough justice in terms of what they have accomplished. And she feels that others, like Thornton and Martin, deserve more recognition as well. 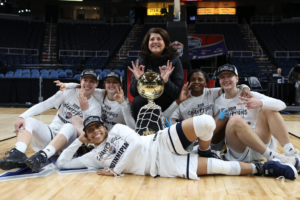 [/media-credit]“We’ve had so much success and dominant success and yet, individually, they’re not recognized. That hurts,” Fabbri said. “They would tell you that they don’t care…we’re up here again with 52 straight [wins], and it does hurt. These players need to be recognized.

The season is not complete for the Bobcats. With the win, Quinnipiac will be playing in the NCAA Tournament for the third straight season. Its opponent has yet to be determined, but it will be announced on Monday, March 18.

“I think it speaks to the character and the determination that they have collectively as a class and again how they have elevated the program, they want to see that second weekend,” Fabbri said. “They have a taste of it, getting out there and seeing South Carolina (two years ago). And again, that’s not a hope, a wish or a prayer, they are determined. They’re anxious to see who our pod is and get ready to go to work and see that second weekend for sure.”