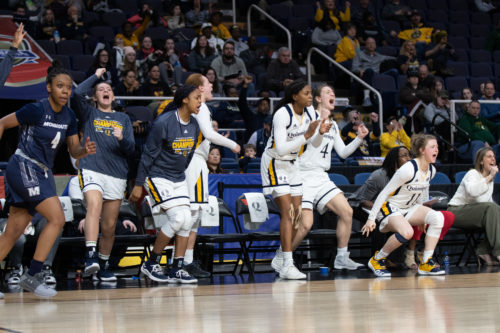 The Quinnipiac women’s basketball team rolled past Monmouth, 80-42, at the Times Union Center on Sunday to advance to its sixth straight MAAC championship game.

Quinnipiac (25-6) has won three of five MAAC Tournaments and five of six regular season titles since joining the league in 2013. 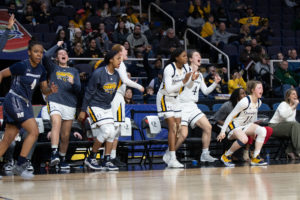 [/media-credit]For the third time in five years, Quinnipiac ended Monmouth’s season. The Bobcats beat the Hawks in the quarterfinals in 2015 and 2018, and then in the semifinals in 2016 and again on Sunday.

“Dominant performance for 40 minutes on both ends of the ball,” Quinnipiac head coach Tricia Fabbri said. “We’ve been so good defensively all year – top-five defensive team in the nation – but offensively we matched that today in our efficiency. Great performance wire-to-wire.”

This one was never particularly close, as the Bobcats jumped out to a 27-11 lead after the first quarter. Quinnipiac senior forward Paula Strautmane scored the first six points of the game and nine in the opening quarter. The Latvian finished the game with 15 points, five rebounds and three blocks, but foul trouble limited her minutes.

“She was dominant, if she wasn’t in foul trouble (she would’ve been ever better,” Fabbri said of Strautmane’s performance. “I’ve never seen offensively as efficiently (as she did). When she plays well, we are really tough to beat.” 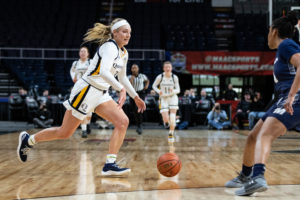 [/media-credit]“I think (having balanced scoring) is very important, just so teams can’t scout one player on our team,” Herd said. “It makes it harder if all five players are contributing offensively and defensively. If you have just three players contributing, it’s easier to scout and defend.”

Herd, who was named MAAC Sixth Player of the Year on Friday, came in off the bench and contributed like she has all season. She buried a 3-pointer in the final seconds of the first and third quarters to keep momentum.

“A three (at the end of a quarter) is just more demoralizing because it’s that one extra point,” Herd said. “It just gets the energy up on the bench and everything. I think it’s just that extra spark. It gets us all hyped.”

On the other end of the floor, Quinnipiac’s defense limited Monmouth to 26 percent shooting for the game (23.1 percent from deep). The Bobcats also forced 22 turnovers and scored 26 points off those turnovers.

Outside of her scoring, Fay filled the statsheet with six rebounds, six assists and five steals. Seven other Bobcats had at least one steal in the game.

Jen Fay with an absolute dime to set up a Paige Warfel layup. Bobcats up 29-11 two minutes into the second quarter. #MAACHoops19 @jfay__24 | @Paigewarfel | @QU_WBB pic.twitter.com/k0cnp1V3CD

Now, Quinnipiac heads to the MAAC championship game, looking for its third consecutive title and fourth in six years since joining the MAAC. The starting lineup – composed of five seniors – only knows how to win MAAC championships.

“There is a lack of anxiousness,” Fabbri said when asked what makes this group different. “There is such a poise in getting ready and in their preparation. They’ve been here before and they’re really unfazed. …There’s just a real calm, confidence and comfortability in being here this weekend and going about our business.”

The Bobcats will take No. 3 Marist on Monday at 2:30 p.m. in Albany with an NCAA Tournament bid on the line. This will be the fourth time in six years these teams meet in the final, with Quinnipiac winning two of the first three, including a 67-58 win last year.

“We’ve been unfazed about what tomorrow is going to bring,” Fabbri said when asked how the team will prepare for the title game. “We’re just playing our best basketball right now.”