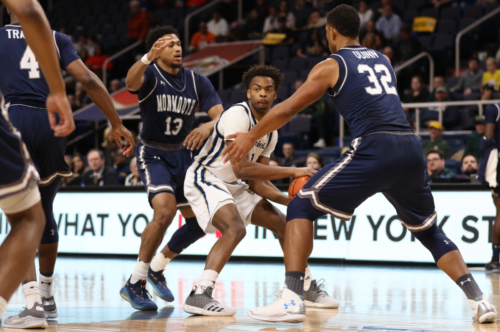 The clock has struck midnight on Quinnipiac men’s basketball’s 2018-19 season, as it fell to No. 6 Monmouth, 98-92, in the Metro Atlantic Athletic Conference quarterfinals on Saturday night at the Times Union Center. 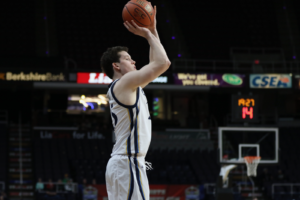 [/media-credit]“I thought [Monmouth] played with incredible physicality and toughness,” Quinnipiac head coach Baker Dunleavy said. “There was a lot of back in forth in that game but they had one more punch in them.

“We had a very impressive offensive night which this group can do, but we didn’t have enough answers defensively and rebounding the ball.”

Quinnipiac took a 71-65 lead with 10:53 to play in the second half, but the Hawks scored 15 unanswered to take a 80-71 lead. After graduate student guard Cam Young hit his seventh three of the night to cut the lead back to six, Monmouth senior center Diago Quinn picked up a couple layups on second chances, killing two of the few stops the Bobcats were able to get on the night.

“We probably stopped scoring at the same rate,” Dunleavy said of what happened during Monmouth’s 21-3 run in the second half. “Our scoring had been carrying us, trading baskets, we went on a little bit of a dry spell and they just continued their effort. This time of year you’ve got to get stops and that’s probably what we were not able to do.”

Since the 10:53 mark of the second half Monmouth has dominated, going 23-7 over that stretch.

Monmouth is leading 13-2 in second chance points and 15-3 in points off turnovers. #MAACHoops19

The Bobcats got huge games out of Young (33 points) and sophomore forward Jacob Rigoni (30 points, 7-for-11 from 3-point range), but Monmouth was able to keep the ball out of Young’s hands down the stretch to thwart off a potential Quinnipiac comeback.

Cam Young's 4-point play cuts the deficit to 45-43 with 57 seconds left in the half. @babykolt | @QU_MBB pic.twitter.com/CviRzwVNnu

“[Monmouth] started to double-team a little more,” Young said. “They kind of did it in the first half. They tried to get the ball out of my hands. I was passing the ball and just working off my teammates at that point.”

“I was trying to play with a clear mind offensively and not second-guess myself,” Rigoni said. “My teammates give me a lot of confidence and the coaches do a good job of keeping me up whether I am making shots or missing shots.

“Tonight, we’ve got to go back and look at our defense and that’s the disappointing part of this game.”

Jacob Rigoni hits the first shot of the game, a great sign for Quinnipiac. He was 0-for-3 (0 points) in Quinnipiac's season finale (a loss to Manhattan), and now he's 2-for-2 tonight (6 points). #MAACHoops19 pic.twitter.com/5YJ7yCglBe

Monmouth head coach King Rice had high praise for both Dunleavy and Young after the win, which was the Hawks first against Quinnipiac since Dunleavy took over as head coach.

“Today was our day,” Rice said. “We tried to take the ball out of [Young’s] hands. I told them after our win the other day, we walked through it, and [Young] still got us for 33 [points].”

The 2018-19 season ends rather unceremoniously for the Bobcats, who were much improved in the regular season this year, but failed to repeat on 2017-18’s postseason success. 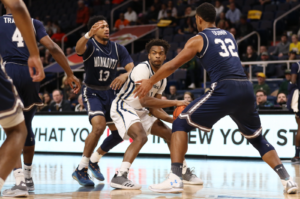 [/media-credit]“Tonight wasn’t the result we wanted,” Young said. “We had some ups and downs throughout the season. I don’t think we reached where we really wanted to as a team.”

The Bobcats struggles defensively prevented them from making their second consecutive appearance in the MAAC tournament semifinals.

“We didn’t reach our defensive potential [this season],” Dunleavy said. “We’ve got to ask ourselves ‘Why?,’ and the group that comes back we’ve got to address that.”