Quinnipiac women’s basketball moving on after win over Fairfield 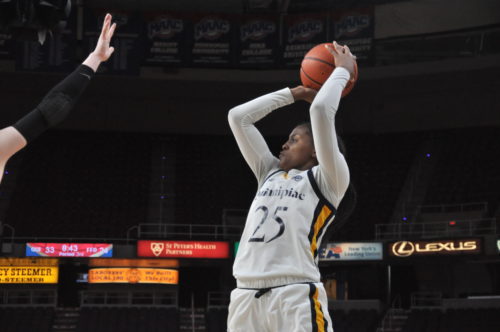 The Quinnipiac women’s basketball team defeated Fairfield 63-48 in the quarterfinals of the MAAC Tournament on Friday afternoon at the Times Union Center in Albany, New York. Senior guards Aryn McClure and Brittany Martin and senior forward Jen Fay all had double-digit points, leading the way for the Bobcats to secure their 50th straight MAAC victory. 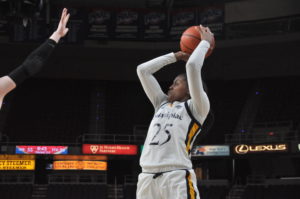 [/media-credit]“I thought from our end, it was a very well-played game,” Quinnipiac head coach Tricia Fabbri said. “Very efficient against their zone. Our team was very comfortable, great start in the first quarter and even better end in the fourth quarter. Way to get the win, live to see Sunday.”

For 10 seconds, the game was tied at 0. No. 1-ranked Quinnipiac took the lead on jumper by Fay and never lost the lead for the rest of the game. It then jumped out to a quick 12-0 lead in the first quarter, and closed the quarter up 16-5, with Fay securing seven points.

No. 9-ranked Fairfield was able to claw its way back into the game in the second quarter, outscoring Quinnipiac in that frame 17-15. This included a scoreless run by Quinnipiac where it did not see a single basket fall in the last 3:46 of the half, but still holding a 31-22 lead.

The momentum continued to be on the Fairfield side at the start of the third quarter, when the Stags cut the lead to six. The teams exchanged baskets, bringing the game to 39-33, before Quinnipiac went on a 9-0 run to finish the third quarter and took a commanding 48-33 lead into the final 10 minutes.

“It’s a game of runs,” McClure said. “We knew that they were eventually going to start hitting, especially since they didn’t score until five minutes in. So they were just trying to get in a groove, but we kind of stopped them and gained our momentum back.

“It’s playoffs, it’s gonna get close. And you just gotta stay cool, calm and collected and we did that and we just kept pushing, pushing on the gas.”

The momentum stayed on the Quinnipiac side as the fourth quarter saw Quinnipiac never have the margin reach single-digits and the Bobcats ended the Stags’ season with a 63-48 defeat.

Quinnipiac shot 42.9 percent from the field, to go along with a 42.9 percent effort from beyond the arc. McClure was all over the scoresheet, finishing with 15 points, six assists, four rebounds and three steals. Fay added 13 points and six rebounds, while Martin had 12 points. For Fairfield, senior guard Casey Foley led the way with 18 points.

Defensively, Quinnipiac held Fairfield to under its season average of 56.2. One of the more impressive stats was that Fairfield did not make it to the free throw line until the fourth quarter, which shows how clean of a defensive game Quinnipiac was able to play.

“The difficulty with Fairfield…[is] the amount of offense and sets that they run makes it extremely difficult to defend,” Fabbri said. “That’s the challenge in defending Fairfield. The fact that we were able to just play action without fouling and knowing where the ball was and to be able to guard as cleanly as we were was really who we’ve been all year, but it was difficult today.

“It was a challenge all game long. Today’s game was a very difficult, very well-played and a very well-earned first round game victory.”

The confidence was shown throughout the game on the court, but Fabbri was confident even before her team hit the hardwood.

“Once we secured the No. 1 seed, I have enjoyed the seasons and my team immensely and coming into today’s game, I have never felt happier going into a game where you think ‘Well, it’s win or go home,’” Fabbri said. “It’s just because these young ladies have done so much and we’re at the point in the season where it’s fun for all of us. You wait all year to get to this point… There’s everything to play for and they rally and live for these big moments.”

Quinnipiac advances to the semifinals, where it will play the winner of the game between No. 4 Monmouth and No. 5 Canisius. That game will take place Sunday, March 10 at 11 a.m. Fabbri kept it concise when discussing what needs to be said to the team for the next game.

“It’s so short because you speak to the experience – just be us,” Fabbri said. “There was no ‘How are we going to get these kids fired up?’ It’s really simple. Less is more.”