We are all leaders 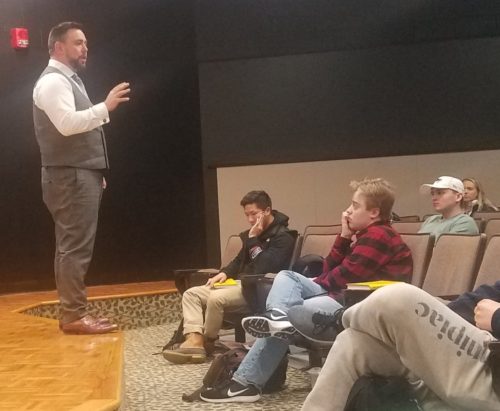 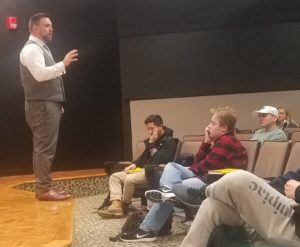 [/media-credit]Drew Dudley is known for a lot of things – being a leadership speaker, author, founder of Day One Leadership and the host of a TED talk on lollipops. Yet, Dudley said that those titles would amount to nothing if he wasn’t driven to be a leader.

Dudley was invited by Campus Life to speak to students about this subject and help them view leadership in a different light on March 4 in Buckman Theater.

Leadership is so much more than holding high positions in life, according to Dudley.

“I think that we’ve been taught at a very young age to try and acquire things and achieve things so that other people will look at you like a leader, so you feel like you have the right to call yourself a leader,” Dudley said. “The number one determinant of what people think of you and what you think of yourself is how you actually behave on a day-to-day basis.”

Dudley began his discussion by asking students by a show of hands how many of them were completely and totally comfortable with calling themselves a leader, which resulted in more than half of the audience raising their hands.

“I ask that question all over the world, different ages, different backgrounds, different industries,” Dudley said. “Less than one percent of the time have I had more than half the people in any given room willing to raise their hands and call themselves leaders.”

The discussion went on with Dudley expressing how many of us having been taught in schools to look up to a certain kind of leader, people who are considered giants in society like investors, doctors or presidents, when it ultimately limits our thinking of what that term really means and thus, makes us look at our own acts of leadership as miniscule compared to the examples we have been given.

“I have no problem at all celebrating successful people. The challenge is giants are all we use to give examples of leadership, what we’re effectively doing is we’re minimizing the leadership that we show everyday,” Dudley said. “When I say moments of leadership, what I mean are moments of tremendous interpersonal impact. That could be a one-on-one thing, a moment of compassion, forgiveness, kindness, generosity. Those are the biggest things that you have in your power to do at this point in your life.”

Dudley gave a real life example when he described an individual named Mr. Peters who was a janitor in his high school whom he considered a prime example of a leader. Despite how some people may have looked down on Mr. Peters for having a less than desirable job by society’s standards, the way he interacted with students revealed his positive character, which should mean more to people than what job he had, according to Dudley.

This example led to Dudley’s introduction of, The Leadership Test, which he created with the help of his former students to guide them in being the best person they can be.

“Imagine that every night before you went to bed you had to prove that you deserved another day on this planet. Every single night,” Dudley said. “You know how you prove it? You pass the test. You got to get three out of the six questions over the course of your day or you don’t get another one.”

These six questions where each tied to a specific value including:

Impact: what have I done to recognize someone else’s leadership?

Growth: what did I do today to make it more likely someone would learn something?

Courage: what did I try today that might not work, but tried anyway?

Empowerment: what have I done today to help someone else move closer to a goal?

Class: when did I ‘elevate’ instead of ‘escalate’ today?

Self-respect: what did I do today to be good to myself?

“If you try to get three out of these six questions answered everyday of your life, your grades get better, your relationships get stronger, your career prospects get better and honest to God your life gets happier,” Dudley said. “I’m not saying it’s perfect, but ultimately you will always feel a little bit more like you matter.”

Brenton Bavaro, sophomore finance major said one of the six questions personally stood out to him.

“The question that he had for courage, [what did I try today that might not work, but tried anyway?], I think that one sticks out the most and I’m going to try that as well as the other ones,” Bavaro said. “I think I’m a good leader, but I think there’s always things that I can improve on.”

“I initially attended a conference in Austin, Texas over winter break when I first heard Drew Dudley deliver a keynote,” Jean-Baptiste said. “At the time I had no idea who he was, but I was vastly inspired by his subject matter. I immediately thought this would be a speaker that the students at QU would benefit from tremendously. I appreciate him trying to redefine leadership and I knew this new definition was something the leaders and students on campus needed to hear.”

Jean-Baptiste went on to recommend Dudley to Matthew Kurz, assistant dean of student affairs, so he can share his knowledge to the student body.

“Campus Life puts on leadership development programs for Quinnipiac students and we had some options,” Kurz said. “Drew came up as a speaker who was widely acclaimed nationally and Jamien was very passionate about it and wanted to support that.”

There were other pieces of advice that Dudley gave to students that evening to help to either become more of a leader or recognize the leadership they already had which involved learning to take rejection well, follow the values you want to see in others, not searching for happiness in other people and reminding themselves above all else that they matter regardless of how their grades or their job credentials compare to other people.

Jessica VanWart, senior computer information systems major said that one of her favorite pieces of advice Dudley gave was to forgive others.

“He said, happiness is not possible without forgiveness, and that is something that you don’t really think of because you’re like, ‘Oh I’m better without that person,’” VanWart said. “But then later on they might pass away or something and you’re like, I care about that person. It was interesting to hear a different way of happiness.”

It doesn’t matter how many degrees someone gets or how much money or fame they achieve because each person will always be aware of who they want to be and how they’re behaving, according to Dudley.

Dudley said that he hopes students understand that his message that evening was for them to recognize that they have all the capacity for leadership and once they realize that then they are more likely to engage in it.

“I want them to walk out knowing that regardless of age, their background, how much money their family has, they have the ability to on a daily basis send someone walking away from them feeling better off for that interaction,” Dudley said. “I think that there is no way that cannot be considered leadership. It’s not the only type of leadership, but it is one that all of us can live.”