Will they grow old? 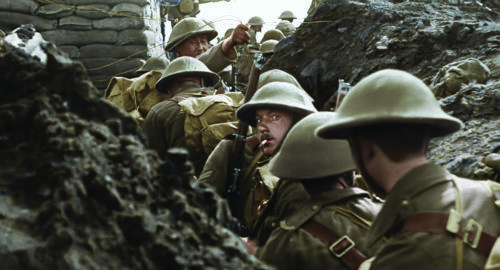 After four years, revolutionary director, Peter Jackson returns to the director’s chair, but this time, he was not on set.

Teaming up with BBC Films and using archive footage from the Imperial War Museum, Jackson delivers an hour and forty-minute long documentary, “They Shall Not Grow Old,” comprised entirely of retouched and colored footage shot a hundred years ago in the first world war. 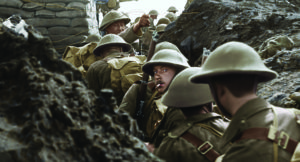 [/media-credit]The documentary follows the daily lives of British soldiers defending their homeland from German invasion from 1914-1918. However, the film is constructed in a sense to focus on the “average soldier.” To achieve this effect, the audio is mostly composed of archived interviews with soldiers from the war as the film dissects the experience.

Jackson is no stranger to technologically advanced cinema, having famously directed “The Hobbit” and “Lord of the Rings” trilogies and the 2006 “King Kong.” “They Shall Not Grow Old” is at the same technical scale thanks to its ambitious task of telling a story without a single frame of original footage.

This task is greatly fulfilled by Jackson as the film humanizes the soldiers of the first world war in such a simple way. The audience is taken on a journey in extreme detail in the life of young people’s experiences in a very transformative war.

While the film starts out black and white, it quickly transitions into full 16:9 ratio, colored footage. For the most part, it’s hard to believe the footage presented is over a century old, because the colors are so realistic and appears without a single speck or grain. The only time the film feels unnatural is when close up shots are presented, where the images look slightly artificial.

Cinema was still in its very early stages during World War I, so no audio was actually recorded at the time the footage was filmed. In an interview with Fox 5, Jackson said, “There were people in the world, I didn’t know they were called this, ‘forensic lip readers.’”

Personally, this was my favorite part of the film, as the re-recorded audio is so vital in the film’s immersive exposition, really making the audience feel like a fly on the wall.

“They Shall Not Grow Old” is an amazing demonstration of editing done right. Jackson went on to say, “You can’t go into it with a plan, because the plan requires you to have the perfect pictures and the perfect sound to fulfill your plan… You watch a hundred hours of footage, and let the soldier tell their story, that’s all I tried to do.”

Despite Jackson’s words, the film has a very natural feeling structure that is never directly stated to the audience, it is organized in the interviews based on subjects and never feels objective.

The film focuses on smaller subjects that other war films tend to avoid that illustrate the day to day lives of the average soldier, like Jackson’s grandfather who the film is dedicated to.

While the music is nothing groundbreaking, the score by David Donaldson is a pleasant homage to the classical era of the last century.

Due to its simple presentation, it is easy to ignore the sheer amount of work put into every second on screen, as every single frame is beautifully restored. The film has a very personal feel to it, contrasting the meticulous studio and high-end production that it went through.

Shortly after the film was released, Jackson signed on to direct a film with a similar concept about The Beatles. Fifty-five hours of footage were recorded in The Beatles’ production on their final album, “Let it Be.” Jackson has the approval of those that are still alive involved with the Beatles’ legacy, the film is set be released to some time in 2020.

“They Shall Not Grow Old” is extremely informative and fascinating regardless of its very broad presentation of the subject matter.

The power of documentary film is an underrated force in the general film community, “They Shall Not Grow Old” demonstrates documentary films true potential even despite the film containing no professionally produced footage.

The film is certainly worth the price of admission, as it delightfully portrays such an unexplored era in history.