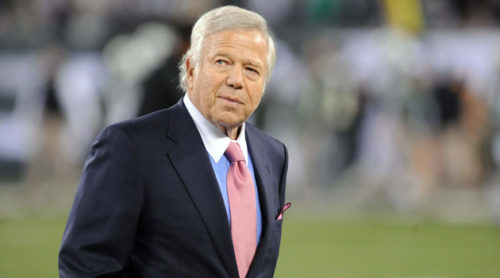 Nineteen days after the Super Bowl, the winning team has found themselves back in the headlines for the wrong reasons. 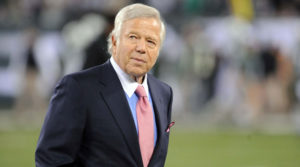 [/media-credit]New England Patriots owner Robert Kraft, 77, has been charged with two counts of first-degree solicitation. On Jan. 20, the same day the New England Patriots played the Kansas City Chiefs in the AFC Championship, Kraft visited Orchids of Asia Day Spa in Jupiter, Florida at 11 a.m. He was videotaped receiving oral and manual sex from a woman at the spa and officials say he gave her a $100 bill and another bill before leaving at 11:15 a.m. Also, at 6 p.m. on Jan. 19, he was spotted on video surveillance soliciting prostitution. If convicted, Kraft could face one year in jail, a $5,000 fine, 100 hours of community service and attendance in a human trafficking dangers class.

On Friday, Feb. 22, a spokesperson for Kraft said they “categorically deny that Mr. Kraft engaged in any illegal activity.” Also, according to court documents released Thursday, Feb. 28, Kraft officially has pleaded not guilty to these solicitation charges. Robert Kraft’s official court date for his first-degree misdemeanor charges is March 27 8:30 a.m. EST.

Kraft’s arrest was only a part of a crackdown on sex trafficking in Florida. After a supposed six-month investigation by Florida police officers, ten spas have been closed from Palm Beach to Orlando. Another high-profile businessman involved in this prostitution scandal is former Citigroup President John Havens, 62, who was also charged soliciting prostitution. Neither Kraft or Havens are being charged with sex trafficking.

For many people, the news of Kraft’s legal issues is troubling, to say the least. It is hard to fathom a man worth $6.6 billion would find himself involved in prostitution, especially at his age. His alleged actions coming to light may not result in him going to jail, paying a fine or other ramifications, but it has already damaged his reputation and public stature with fans and colleagues.

As the owner of the New England Patriots, he is accustomed to success as exemplified by his Patriots most recent Super Bowl win this past season. Besides relatively minor scandals, in comparison to his solicitation charges, like Deflategate and Spygate, Robert Kraft’s reputation as an owner is quite pristine. Even when it comes to matters outside of football, Kraft recently teamed with rappers Jay-Z and Meek Mill and Philadelphia 76ers owner Michael Rubin to start a criminal justice reform organization because of injustice they believe to be rooted in the prison system. Kraft not only accumulated a lot of financial wealth, but he also was increasingly gaining social capital with people who would not normally respect an NFL owner.

CEO of The Ringer and New England Patriots fan Bill Simmons voiced his opinion on the Kraft situation on ESPN’s Dan Le Batard Show. Simmons was less surprised than me and many other football viewers because he believed Kraft was “somebody that has been going off the rails for a while here.”

“He was married for a long time,” Simmons said. “His wife died in 2011. And I think he had a really hard time dealing with it and just started acting really strangely — dating people that were 40, 45 years younger than him, going out to Super Bowl parties and Oscar parties.”

Simmons ended his point by saying he also puts it in perspective of what if this was his dad partying, wearing diamond champion pendants, and hanging out with Meek Mill as an almost 78-year-old billionaire.

I do follow Simmons’ thinking but I do not come to the same conclusion that his arguably erratic behavior was a sign for worse things to come. I would admit that partying to the degree of Kraft’s level where he even danced with Cardi B on stage the day of the Super Bowl does raise some eyebrows on his mental state.

The final piece that will need to be discussed more at length in the near future is what the NFL will do in response. In a statement on Feb. 22, The NFL said they are “aware of the ongoing law enforcement matter and will continue to monitor developments.” There is not much precedent of an NFL owner getting into this type of predicament. Colts Owner, Jim Irsay, in 2014 was suspended six games and fined $500,000 after he pleaded guilty to a misdemeanor count of operating a vehicle while intoxicated. Irsay’s punishment also came after he pleaded guilty in contrast to Kraft who is denying any illegal activity.

It is almost impossible to predict what the exact punishment would be for Kraft. As much as everyone can find him guilty in the court of public opinion, he is still innocent until proven otherwise. However, I would hope NFL Commissioner Roger Goodell would hold owners to a standard that is at the very least equal to players. Kraft’s initial response to these allegations was not of complete moral high ground and utter innocence but simply of non-engagement in “illegal activity.” As many football fans and non-fans know, players have lost a substantial amount of money and even their careers for actions that do not come near to bordering on illegal.