Runnin’ the Point: A missed opportunity 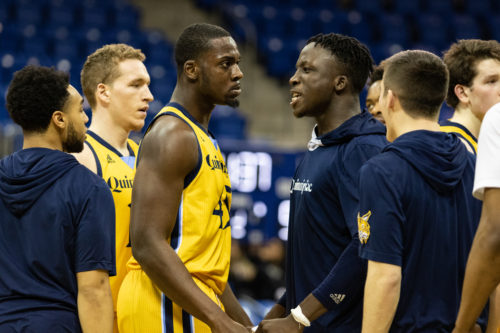 Oh, what could’ve been.

As you could’ve guessed by now, that did not happen.

Quinnipiac couldn’t get anything going offensively and lost, 62-58. The 58 points were tied for the third-lowest scoring output of the season for the Bobcats, and the lowest since a 58-50 win over Maine on Nov. 25.

“We’ve been playing good basketball on the road – we had two straight road wins and feel good about where we are,” Quinnipiac head coach Baker Dunleavy said after the game. “Really impressed with the way Manhattan came in and set the tone. The game was played at their pace and on their terms.”

Despite a tough loss to end a promising regular season, the Bobcats can’t afford to obsess over it.

“Any experience you get, you have to grow and learn from,” Dunleavy said. “It’s always more fun to learn from a win, but sometimes you’re more motivated by the tough feeling you get in your gut in a loss.” 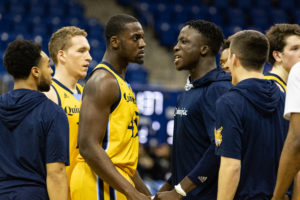 [/media-credit]Overall, the regular season was a success. Quinnipiac finished 16-13 (11-7 MAAC) and ended up in a four-way tie for second in the standings, but will be seeded third in the MAAC Tournament based on tiebreakers. The MAAC Preseason Coaches’ Poll had the Bobcats finishing tied for third, so it’s safe to say the season went as planned (on paper, at least).

Losing out on getting that No. 2 seed is a big blow for the tournament, though. The top five seeds get a bye, but the No. 1 and No. 2 seeds have the scheduling advantage. The top two seeds play their first game on Friday, then play Sunday if they win and then again on Monday in the title game. Seeds three through five don’t start playing until Saturday, but then still have to play Sunday and Monday if they can keep winning. Playing three days in a row is a grind.

“I’ve approached (Albany) the same way every year,” senior forward Abdulai Bundu said. “I always pride myself on being a consistent player, just knowing my role and leading guys.

“… We just have to learn from today. Today has to drive us through the tournament, because at that point it’s life or death.”

The Bobcats didn’t play on back-to-back nights at all this season, as is the norm in college basketball. Including Sunday’s loss, they finished 3-3 on the year in games with only one day of rest between games.

“One day’s preparation, (I) probably didn’t do a good enough job getting ourselves ready,” Dunleavy said after the loss Sunday. “But, I thought our guys battled – like always.”

All those names are fine, but in the end, Quinnipiac’s fate is tied to one man – Cam Young.

Young is going to determine how this weekend goes for the Bobcats.

For Young, it’s about efficiency. Since scoring a 2018-19 NCAA record 55 points on 15-for-24 shooting against Siena on Feb. 17, Young has gone uncharacteristically cold. The graduate student guard has shot under 50 percent in three of Quinnipiac’s final four games, with the Bobcats going 2-2 over that stretch. In the 12 games before the Siena explosion, Young shot 50 percent or higher 10 times.

Understandably, teams have been defending him differently in these final four games. Young has seen lots of double-teams and evolving looks between man and zone. Manhattan went zone for most of the game and generally sent two defenders at Young whenever he caught the ball. The plan worked, as he was limited to 16 points (3-for-12 shooting), his lowest total since Jan. 3.

“We try to flash him in the middle (of the zone) and run him off some screens,” Dunleavy said when asked what Quinnipiac can do to get Young easy looks when facing zone defenses.

If Young can get back to his pre-Siena form, the Bobcats will be in great shape.

It sounds simple. Make shots and you win more. Duh. But the quality of shots is what usually determines those percentages.

Shifting gears, the bench is going to need to show up in Albany, especially if the Bobcats hope to get to that second and third game. Depth is tested as the starters wear down, and that’ll be truer than ever when they are playing on consecutive nights.

The bench has been noticeably absent for much of the year, but that might be changing down the stretch. In the first 16 games of MAAC play, Quinnipiac’s bench averaged just 8.4 points per game (PPG) as a unit. The Bobcats bench has scored 15 in each of the last two games, though.

“Tyree Pickron’s been doing a great job,” Dunleavy said. “He’s really been coming along. Dedicating more minutes for him is just kind of a feel thing, but I thought he did a great job.”

Pickron played over 11 minutes just once in those first 16 games of MAAC play, but has played 18 in each of the last two. He had modest games of six and seven points, but that’s solid production from a bench that’s been ice cold.

Just watching the team, it is clear Pickron is a key locker room personality. He’s always quick to support his teammates and lift them up. While Pickron stands out as one of those guys, the whole team has been that way all season.

“Everybody has a positive attitude,” Bundu said when asked what separates this team. “We’ve messed up a lot of times and guys are just like ‘Come on, let’s keep it together.’ We’ll text each other individually, randomly, and send a long paragraph explaining the possibilities of what we can do or how much we love (each other). It’s just what we do – we stay together.”