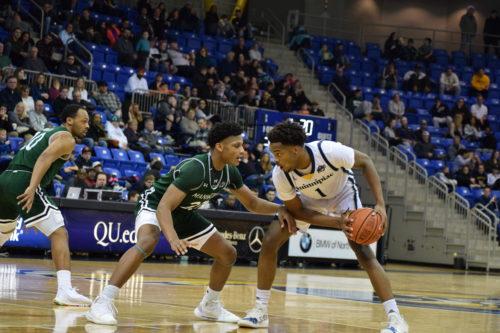 The Quinnipiac men’s basketball team was unable to finish the 2018-19 regular season on a high note, as it fell to Manhattan, 62-58 on Sunday at the People’s United Center.

The loss not only spoiled the Bobcats’ Senior Day, where guards Andrew and Aaron Robinson as well as forward Abdulai Bundu were honored, but it also cost the Bobcats a share of the Metro Atlantic Athletic Conference regular season title.

“We’ve got to learn from today,” Bundu said. “Today has to be what drives us throughout that whole tournament cause at that point it’s life or death. There’s a lot of stuff we’ve got to work on to make it further in the tournament.” 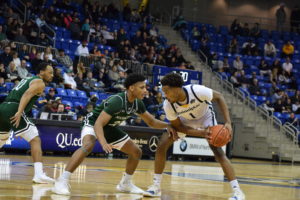 “Disappointing day for us,” Quinnipiac head coach Baker Dunleavy said. “We’ve been playing good basketball on the road, with two straight roads wins and I feel really good about where we are.

“I think the biggest takeaway is, the last game of the season, Manhattan really came in here and set the tone. The game was played at their pace and on their terms.”

The Bobcats struggled shooting the ball in this one going just 30.8 percent from the field and 32.3 percent from 3-point range.

Despite that, the Bobcats still had a shot to at least force overtime in this one. After a 13-4 run in the closing minutes put the Jaspers ahead 61-58, senior guard Samson Usilo missed a pair of free throws, giving the Bobcats the ball back with 10.8 seconds remaining in regulation.

However, sophomore guard Rich Kelly (17 points) was blocked on a layup with just under five seconds remaining, ending the Bobcats hope at a comeback.

Kelly led the Bobcats in scoring on an afternoon that saw Manhattan’s zone defense double-teaming and locking in on graduate student guard Cam Young (16 points) just about every time he touched the ball.

Dunleavy said that they need to move Young around more and continue to get him coming off screens in order to get him more open looks.

“We struggled to throw off their timing in terms of their passes and their positioning in the paint,” Dunleavy said. “Give [Manhattan] credit for establishing their game [on those post ups].”

The Bobcats will play the winner of the Monmouth/Niagara matchup next Saturday at the Times Union Center in Albany, New York.

After making it to the semifinals of the tournament last season, the Bobcats will look to improve upon that finish and hopefully find themselves playing deeper into the postseason.

“I think [playing] 40 minutes like always,” Dunleavy said of the team’s biggest takeaway from the loss heading into the MAAC tournament. “I thought we didn’t have a great start to the game and I think at times we did a great job responding and making runs, but if that’s how you play you fall one run short you can lose a game. So just consistent effort and tightening up some of the details especially on the defensive end.”