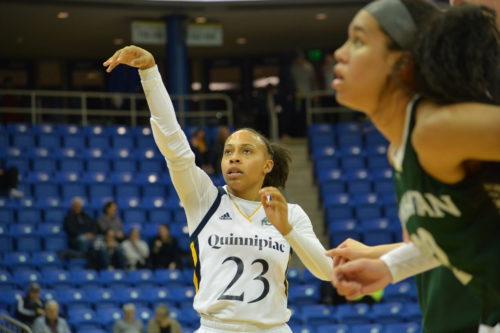 The Quinnipiac women’s basketball team beat the Manhattan Jaspers in a Metro Atlantic Athletic Conference (MAAC) clash that was Quinnipiac’s final home game of the season on Thursday by a final score of 59-42. 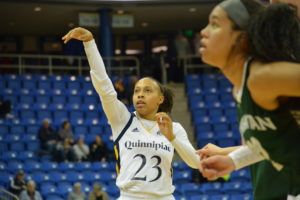 [/media-credit]Leading the way for the Bobcats was senior guard Brittany Martin. Martin led all scorers with a career-high 20 points while shooting 7-of-11 from the floor and 3-of-4 from beyond the arc. Her previous career high of 19 came in a win against Saint Peters on Jan. 6.

“She has saved her best for her senior year go-round, and just been really playing so confidently,” Quinnipiac head coach Tricia Fabbri said. “She knows that this is her last ride into the sunset with her teammates that have accomplished so much and you just want to leave it all out on the floor. Her confidence level has been unwavering all season long.”

Redshirt senior forward Jen Fay collected her second double-double of the season by grabbing 12 rebounds and putting 10 points on the board. The other two games Fay has recorded double-digit rebounds came in the form of a 13 and a 16 rebound game, respectively.

“I feel like I probably could’ve gotten a few more rebounds because I think I got benched a couple times for not getting more of those,” Fay said with a laugh. “I try to do my best to get on the glass and box out a little bit. They got some really big, athletic post players in there so that was pretty tough. I just do what I can to help the team.”

The Jaspers also had a pair of double-digit point scorers on the night. Sophomore center Courtney Warley had a rough day from the floor shooting 2-of-7, but found her groove from the charity stripe going 10-of-12, finishing with 14 points and 12 rebounds for her own double-double.

Sophomore guard Lynette Taitt led the Jaspers in points with 17 while shooting 7-of-17 from the floor. She also led the team in blocks with three and in assists, tallying all four of Manhattan’s assists.

The Bobcats are looking ahead to the final matchup of their regular season when they head to Loudonville, New York to take on the Siena College Saints (12-16, 8-9 MAAC). The Bobcats have now won 48 consecutive MAAC contests, the 13th-longest in Division I history.

Despite the team’s dominance over the MAAC the last several years, they aren’t overlooking anyone. Even a last place team could pose a threat to a top seed, according to Martin.

“Going into the MAAC, any team has to be as confident as possible,” Martin said. “Every team, even the last team in the conference, they’re coming in wanting to win. You have that energy coming in, you never know what could happen. There could be an upset, but that’s not what we want. We’re coming in hungrier than ever.”