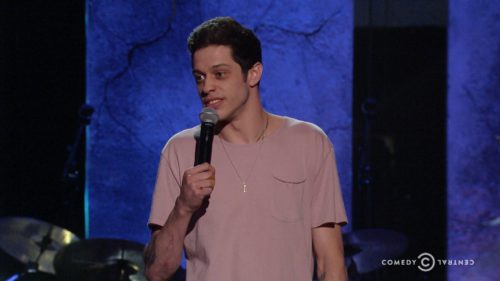 Pete Davidson made the journey to Fairfield, Connecticut for his comedy show at Sacred Heart University on Feb. 24. The Staten Island native was upfront with the audience from the get-go, saying he had no clue where he was. He followed by saying he wanted to cancel the show in order to attend an Oscars after party, but his team told him he would get fined. The show was originally scheduled for Jan. 27, but Davidson had to cancel for the Sundance Film Festival in California. 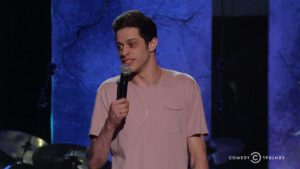 [/media-credit]Davidson has been a cast member on SNL since 2014. He typically can be found giving his takes on the Weekend Update Desk. Before joining SNL, he was a cast member on MTV’s show, Wild N’ Out. His fame skyrocketed this summer when he was engaged to pop music singer, Ariana Grande.

In typical Davidson fashion, he did not hold back any of his jokes. He first started by asking what the point of a Catholic college was.

“Do you guys all walk around in uniforms?” he asked the audience of Sacred Heart students.

When the crowd responded no, Davidson came back with “Then what’s the point? Do you have priests running around?”

Segwaying off of priests, Davidson asked the only male audience member in the front row if he remembered the first time he masturbated. After listening to the story from the audience member, Davidson then disclosed he first masturbated at the age of 16. He claimed he was a late bloomer because he felt too awkward to ask his mom what to do (Davidson’s father was a firefighter who passed away in 9/11). The best solution Davidson said, was to ask one of his friends. After a few trial and error runs — one including a Macy’s magazine — Davidson said the first time was like those confetti shooters at a concert.

The 25-year-old went on to say how he is financially supporting his friend who just had a baby. Davidson said he gets jealous watching them play together, because in a way he feels like the father…especially when he bought the toys. He continued on by telling a story of how he was babysitting recently. The baby is teething, so naturally the baby started sucking Davidson’s finger.

Davidson made no reference or jokes of any kind about Ariana Grande. However, there was one accidental slip-up. There was an X marked on the stage where Davidson was supposed to stand for the show. While saying the jokes, Davidson would pace back and forth on the stage. When he realized he needed to return to the center of the stage he said, “Gotta get back on my ex!”

There was a dull roar over the crowd and a few gasps. Davidson realized immediately who the audience thought he was referring to, and dropped profanities playfully.

Davidson performed two shows at Sacred Heart, a 6 p.m. and an 8:30 p.m. When the comedy bit wrapped up, Davidson did a Q&A with the audience. According to security guards, the first Q&A got cut short because Davidson did not like the question he was asked. A warning was given the audience of the second show and it was respected.

During the Q&A, Davidson was asked who he is closest with on SNL. With no hesitation, he replied “Kenan.”

If you are bummed you missed Davidson in Connecticut, have no fear, Davidson and former SNL writer and comedian, John Mulaney are headed to Stamford Mar. 3.