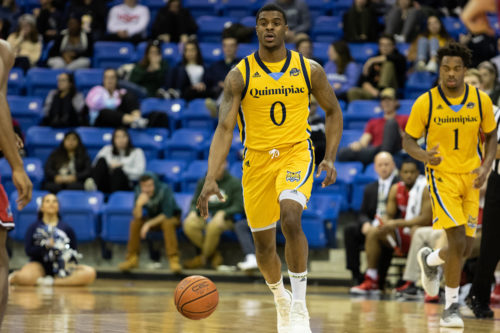 The Quinnipiac men’s basketball team came up short on Tuesday night, dropping yet another close contest, 81-77, to the Iona Gaels at the People’s United Center.

Coming off a triple overtime victory Sunday against Siena, the Bobcats (14-12, 9-6 MAAC) weren’t able to carry over the momentum, missing out on a chance to take sole possession of first place in the Metro Atlantic Athletic Conference.

“We’ve just got to be able to grind defensively when we’re not making the shots when we’re executing offensively in rhythm,” Quinnipiac head coach Baker Dunleavy said. “We’ve got to make up for that with how we defend. That wasn’t there for us tonight, unfortunately.” 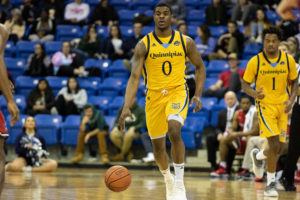 [/media-credit]After heading into the break up three, the Bobcats led for the first 10 minutes of the second half before Iona (11-15, 9-6 MAAC) went on a 22-4 run that spanned almost nine minutes to give them a 73-61 advantage.

“I don’t think physical fatigue played a role [in the run],” sophomore guard Rich Kelly said. “I think we just didn’t lock down defensively and couldn’t get stops.”

With the game tied at 57, Iona junior guard EJ Crawford buried one of his two 3-pointers to give the Gaels a three-point lead that they would never lose.

Crawford (20 points) was one of three Iona players in double-figures as senior guard Rickey McGill finished with 21 and junior forward Tajuan Agee led the way with 27.

“I mean it’s tough,” Kelly said of playing such an experienced Iona squad. “But no one is going to cut us any slack for any of that. It just came down to they have a lot of talented guys offensively and we couldn’t stop them down the stretch.”

The Bobcats got within three multiple times, one being at 62-59, but McGill buried back-to-back threes, the second being an and-one that helped push the Gaels lead to eight.

However, the Bobcats didn’t roll over. Two four-point plays by graduate student guard Cameron Young (30 points) brought the score to 77-71 with a minute to play.

Kelly (18 points) would get it back to three with just nine seconds left on his sixth 3-pointer of the night, but Agee sealed the game by hitting 1-of-2 free throws.

“I think [Young and Kelly] were somewhat efficient from the floor,” Dunleavy said. “Those guys are going to draw a lot of attention and they’ve got to keep making the right plays. I do feel like we had a lot of guys who had open shots tonight and just didn’t make them.

“I don’t think anybody made bad plays out there. There were probably some times where we shot threes where maybe we could have driven the ball.”

The Bobcats shot a season-high 49 3-pointers, their previous high being 37 against UMass back on Nov. 28.

While neither Dunleavy or Kelly was really phased by the amount of shots the Bobcats took from beyond the arc since they were getting good looks, the end result wasn’t pretty.

Sophomore forward Jacob Rigoni (2-for-9), junior guard Travis Atson (1-for-5), senior guard Aaron Robinson (0-for-4) and freshman guard Tyrese Williams (1-for-5) all struggled from beyond the arc.

“We have to become a team that, when shots are falling or shots aren’t falling, we’re playing the same way defensively,” Kelly said. “Tonight we let our offensive struggles at one point get to us and we lapsed on the defensive end and [Iona] capitalized.”

A bright spot for the Bobcats off the bench was junior forward Kevin Marfo who finished with 8 points and 10 rebounds in what was arguably his best performance since returning from a torn meniscus.

“[Marfo] was back in a little bit more of a rhythm,” Dunleavy said. “Understanding the places he needed to be on the court and just being dependable. He’s a great rebounder and he’s a force inside. I thought he showed some signs of growth.”

The Bobcats may have lost a chance to claim sole possession of first in the MAAC, but they’ll get a shot at another one of the conference’s top teams next time out as they travel to Monmouth on Sunday, Feb. 24 to take on the Hawks who are also 9-6 in the MAAC.