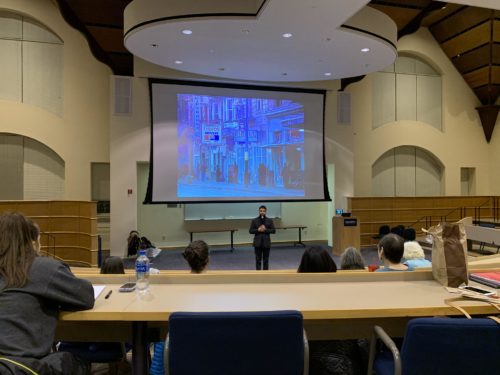 Mokhtar Alkhanshali spilled the beans on the history of the coffee industry on Monday, Feb. 18 on-campus, but failed to tell the whole story of his business.

Alkhanshali is the owner and founder of Port of Mokha, which aims to produce a brand of specialized coffee that supports the farmers that grow it. However, the background behind his company is a little more difficult to swallow. 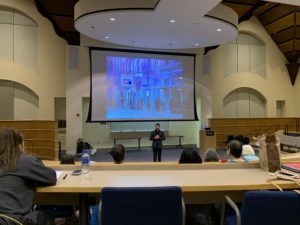 [/media-credit]While not mentioned in his presentation, Alkhanshali was called to a jury trial for alleged embezzlement charges by the United States District Court, Northern District of California in May of 2018.

“Beginning as early as April 2014,” the court case on Eater San Francisco’s website states, “Mokhtar devised a scheme to defraud Mocha Mill and his business partners by, willfully and with the intent to defraud, embezzling cash from company accounts under the guise of necessary and legitimate company expenses.”

Mocha Mill is a secondary company that Alkhanshali founded in Yemen. In his time traveling back and forth to Yemen, he was funded by the profits of the Mocha Mill for conferences and consulting through the Boot Coffee team. However, in April of 2016, Alkhanshali resigned from his position as CEO in April of 2016, according to Daily Coffee News.

“Mokhtar went back to Yemen on behalf of Mocha Mill in October 2014 for about ten months, taking with him the lessons he had learned from Boot and Ethiopian farmers to refine and import the promising Yemeni coffee varieties Boot had identified,” the court case states.

The Mocha Mill also “paid tens of thousands of dollars for the trip.”

It is unknown whether the case is closed.

Matthew Kurz, assistant dean of student affairs for Campus Life and one of the event planners, said he was aware of the allegations.
“We research speakers before bringing them to campus, were aware of this ahead of his visit and determined it was important to allow the legal system to address any claims instead of making our own determination,” Kurz said. “Campus Life works to bring in diverse speakers with unique perspectives and we believe Mokhtar’s time here provided multiple opportunities for learning, student engagement and a unique perspective shared with many in our community.”

On Monday, Alkhanshali chose to ground his presentation in his unwavering passion rather than his unsavory past.

“I was a kid who had an idea and wanted to pursue that idea,” he said. “Our ideas should start with “‘trying to find out what our why is’.”

During his presentation, Alkhanshali addressed many issues within the coffee business.

Many farmers that grow their products for trade, work hard for very little pay, explained Alkhanshali.

Alkhanshali believes in “direct trade,” which is when coffee roasters purchase their product straight from the producer in order to remove middle men.

In the next part of the presentation, Alkhanshali delved into the vast history of the coffee industry.

“There is always a debate between two countries that want to hold claim to be the first country where coffee began,” Alkhanshali said “Yemen is one and Ethiopia.”

However, the first Ethiopian coffee consumers wouldn’t drink their coffee.

“They would chew the coffee cherries with animal fats,” he said.

He went on to joke that coffee is indeed a fruit, in its origins.

Over the years, Alkhanshali has traveled to Yemen to work alongside the farmers and show them how to harvest the ripest coffee seeds.

“I fell in love with the possibility of what coffee can do for us,” he said.

A nonfiction book by Dave Eggers’, “Monk of Mokha,” followed Alkhanshali’s journey through Yemen and his business, Port of Mokha. When he took a precarious trip from Yemen to the United States by boat, he was also featured on the Guardian, NPR and ABC.

Despite last year’s charges, Alkhanshali concluded his speech by encouraging his audience to find the why behind their goals. “If you find something you love doing, you never work a day in your life,” he quoted.