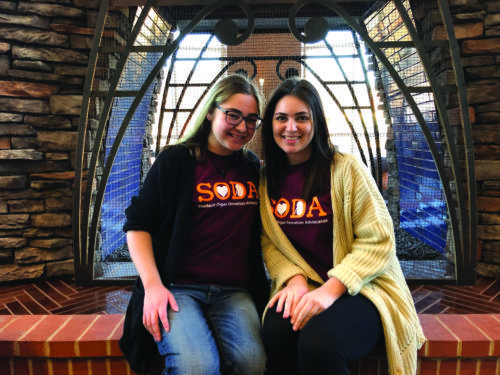 “If you look at the ultimate gift of compassion and love and life and caring, that’s organ donation,” Antaya, a senior psychology major said. 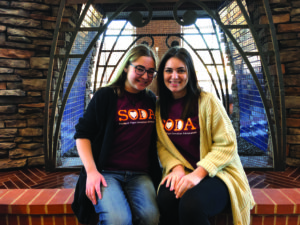 [/media-credit]Antaya, who has cystic fibrosis, received a double lung transplant in August 2015 when she was 20 years old. She is now the president of a new Quinnipiac organization called Student Organ Donation Advocates (SODA).

Antaya said her main goal in bringing SODA, a nationwide organization, to Quinnipiac is to spread the truth about organ donations.

“The point of SODA, which I am so passionate about it, is to provide educational resources to the Quinnipiac community in order to shed light on the many myths and stigmas that surround organ donation,” Antaya said.

Antaya said the reason many people decide not to become organ donors is because of misconceptions.

“The most common myth out there is that if you’re sick or if you get in an accident, that the medical team will not care about your health and they will just take your organs,” Antaya said. “That is completely false. The transplant team only comes when there is pronounced brain death which has to be done through a series of rigorous statistical tests. It’s not a guess.”

One person in particular that has fallen victim to an “organ donation myth” is the vice president of SODA, Samantha Stoica.

“I met Nicole through our sorority Alpha Delta Pi,” Stoica said. “How can you not be inspired by a story like that? I just wanted to kind of help with the club and get things started.”

Stoica, a senior health science major, is not an organ donor and never has been. She said it was something she was not educated about growing up and the negative stigma discouraged her from adding her name to the donor list. Nonetheless, she says she feels at home at SODA meetings.

“This was something I signed up for because I wanted to educate myself and anyone is welcome,” Stoica said.

The organization, which was formally founded at the end of January 2019, has five executive board members and about 10 general board members, but both Stoica and Antaya hope it will continue to grow. The inclusivity of the club reflects the non-discriminatory nature of organ donors.

Both students pointed out the “family” nature of the organ-donor community and said that SODA is a great club for anyone looking to find a “niche.”

“I truly believe [through] organ donation, you are part of a family,” Antaya said. “I really want to reiterate that same energy and that same vibe here on campus. If people, they’re trying to find their niche or they want to have a new friend, come to SODA. We are totally open and we are there for you. It just should be another safe space.”

Stoica said that being a part of the SODA family has inspired her to consider becoming a registered organ donor.

“I think the club has really opened my mind to how many people you can impact, whether it’s receiving or donating,” Stoica said.

Antaya received her lungs from a 17-year-old boy named Jordan who died in a car accident. Antaya said Jordan’s body had the potential to save others’ lives too.

“When the individual has died, their gift that they can pass on, they have the ability to save a life,” Antaya said. “One organ donor can save up to eight lives.”

According to Antaya, 22 people on the transplant list die every day. Antaya has now devoted her second chance at life to decreasing that number.

“Because of my donor, I’m able to not only attend college without wearing an oxygen concentrator on my back,” Antaya said. “I’m in charge of a new club– that I started.”

Prior to the transplant, Antaya’s illness ruled her life.

“I can tell you before my transplant I had no quality of life,” Antaya said. “I was at 10 liters of oxygen at rest, I would do six hours of rigorous airway treatments a day coughing up blood and other stuff that is disgusting. I couldn’t do anything. I had to be taken out of high school and then taken out of college because I was too sick to do any of that so I did all of my coursework online at home.”

Reanne Bryceland, SODA’s event coordinator, joined the club because she has seen first-hand the life-changing possibility of an organ donation.

“My aunt’s sister recently received a lung transplant, and it saved her life,” Bryceland, a sophomore nursing major, said. “I hope we can spread the message of how important organ donation is throughout our Quinnipiac community.”

Organ donation also touched the life of the club’s advisor, Greg Eichhorn, the vice president for admissions and financial aid at Quinnipiac. After hearing Antaya’s story, he was impressed and wanted to help the organization flourish at Quinnipiac.

Going forward, the club hopes to establish at least 25 new registered members on their website, which is directly connected to Donate Life, a national nonprofit dedicated to advocating for organ donations.

The club meets on Tuesday nights at 9:15 p.m. in the Rocky Top Student Center Room 401 and all are welcome to attend.

“We have the potential to save a lot of lives and I think that’s definitely something to get excited about,” Bryceland said.

Antaya credits the double-lung transplant with saving her life and giving her a future.

“A complete stranger decided, I want to give the gift of life today and that’s why I’m here,” Antaya said. “I believe it is not only my duty but my privilege to spread and continue to spread that message across not just Quinnipiac campuses but other campuses and to get other college campuses starting this conversation.”