For the first time in forever

Walt Disney Pictures and Walt Disney Animation Studios have released the first official ‘Frozen 2’ trailer, giving fans a glimpse of what’s to come for Disney’s very own ice queen. The film is expected to be released on Nov. 22.

The first look at the sequel was released six years after the original film, on the studio’s official YouTube page and has already received over 25 million views. 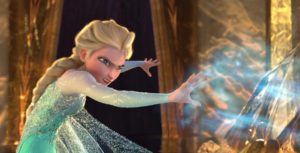 [/media-credit]The trailer featured Elsa (Idina Menzel) braving darker elements as she uses her ice powers to conquer a massive body of water. She’s proven to be unsuccessful after repeatedly being knocked back to shore by the waves. Viewers also catch a glimpse of her sister Anna (Kristen Bell), Olaf (Josh Gad) and Kristoff (Jonathan Groff) riding on the back of his loyal reindeer, Sven. Elsa and Anna have also undergone a wardrobe change, now ditching the dresses and wearing clothes better suited for an adventure.

The teaser trailer hinted at the new film encompassing a more serious tone than its antecedent. There’s also no dialogue throughout the trailer which raises more questions than answers. The lack of plot in the teaser follows the trend of Disney’s other trailers that have been released recently, such as “Aladdin” and “Dumbo.”

Besides the original cast featured in the teaser trailer, there are two new characters shown in the trailer. They are voiced by Sterling K. Brown from the show “This Is Us” and Evan Rachel Wood from “Westworld.”

Chris Buck and Jennifer Lee have also returned to direct “Frozen 2.” Since the original film, Lee has taken over as Chief Creative Officer at Walt Disney Animation Studios. Peter Del Vecho is also returning as a producer.

“There’s a new energy of us just being fearless,” Lee told Variety. “What we’re really investing in now is what is the future generation of filmmakers. We’re taking our seasoned directors and they’re mentoring. There’s an energy of bringing new voices in and creating films that just push us to the next place. The doors are open for everyone to really participate.”

The highly-anticipated film will also include new songs from award-winning songwriters Robert Lopez and Kristen Anderson-Lopez, one of which is anticipated to compete with the first film’s ballad “Let it Go.”

“We have a new song that I think is an evolution,” Lee said to Variety. “It’s its own song. Bobby [Lopez] and Kirsten [Anderson-Lopez] just delivered it three weeks ago. We’ve been working with them for two years and this song just came in and I loved it.”

The sequel to Elsa’s adventures in “Frozen” was announced in March 2015, almost two years after the original film made over $1.2 billion at the box office. “Frozen” also became the highest-grossing animated movie of all time and won two Oscars after its release. The original movie also inspired a Broadway musical by the same name that was nominated for three Tony awards.

In the years after the original film’s release, Disney has put out a single five-minute “Frozen Fever” short that premiered with “Cinderella.” Disney also produced a 22-minute “Olaf’s Frozen Christmas” special that was shown before the movie “Coco” in theaters.

Despite the hype, this isn’t the first time that the sequel has been talked about. The reunited cast from “Frozen” has been teasing to “Frozen 2” since January by posting photos from behind the scenes on both Instagram and Twitter. In particular, Gad tagged Sven the reindeer as Dwayne “The Rock” Johnson in his Instagram post, sparking theories of Johnson’s participation in the film. It’s safe to assume that the cast is also excitedly anticipating the film’s release.

“The story is great and they exude quality,” Bell said in an interview with Fandango. “It took them a while because they wanted to figure out what story they needed to tell and what would be important and engaging–and I think they found it.”

The plot is still under wraps but viewers can rest assured knowing that their favorite sister duo will be embarking on an exciting adventure away from Arendelle.