Runnin’ the Point: Are you kidding me? 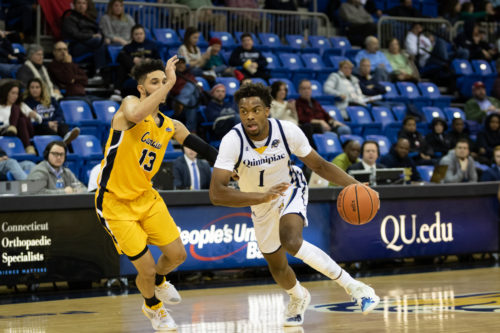 “I’ve been at a loss for words. I can’t believe that even happened.”

What else is there left to say?

Quinnipiac graduate student guard Cam Young has left me, the college basketball world and apparently even himself, speechless.

His story is well-documented. From two years of junior college to playing eight minutes total during his first year at Quinnipiac. Then getting a fresh start under head coach Baker Dunleavy and making the All-MAAC First-Team during his senior year. 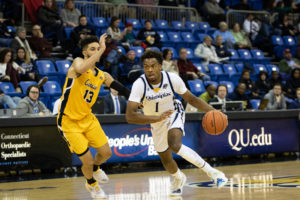 [/media-credit]But this year is different.

Siena freshman guard Jalen Pickett added 46 points and 13 assists in the game as well, not that either of them knew what they had accomplished.

“To be honest, they didn’t have the stats up on the jumbotron at the game, so I honestly didn’t know how many points I had or how many he had,” Young said. “I knew we were both scoring the ball throughout the game, but until the end of the game I didn’t know any statline.”

En route to his 55 points, Young broke a number of NCAA records. His 55 points are the most by a Division I player this season and the third-most this century, behind only Eddie House (61, 2000) and Ben Woodside (60, 2008). He also broke the Quinnipiac program record for points in a game – becoming the first Bobcat to put up 50 in a game – and hit the most 3-pointers in a game for Quinnipiac. The MAAC single-game scoring record? That was also broken, topping the previous high of 46 (which Pickett matched in this game).

“It was a unique game in terms of the back-and-forth, specifically between two players,” Quinnipiac head coach Baker Dunleavy said of the battle between Young and Pickett. “I’ve never been part of anything like it. I almost felt foolish because after the game looking at the box score, I had no idea that either guy had (that many points). Both were in an incredible rhythm.”

The Bobcats are in a great place with four games to play in the regular season. Young’s scoring has only increased by four points per game compared to last season, but the way he’s getting those points is what’s important.

“I’m not surprised that he could get that many points, the part that did amaze me was he did it on such few shots,” Dunleavy said of Young’s performance. “His efficiency was off the charts. He’s one of the most high-volume used guys in our league. A lot of times when you’re that guy you end up taking bad shots because you have to. With him, he’s got high efficiency and high usage, which is really rare.”

Last season, Young got his numbers in an inefficient way, which hindered the Bobcats’ long-term potential. He shot just 42.2 percent from the field and 30.3 percent from deep. Good numbers considering he was averaging 18.8 points per game, but not nearly as efficient as you need your best player to be if you hope to win a MAAC championship.

“The offseason I put a lot of work in, mostly working on my 3-point percentage,” Young said of how he tried to increase his efficiency this season. “Definitely my shot selection (has made me more efficient). Last year I was new to (being the leading scorer), so I took whatever shots I felt like I could make. I felt like I could make all the shots, but this year I’m able to pick my spots and shoot more effectively.”

As of Feb. 18, Young is now averaging 22.8 points per game (PPG) while shooting 48.1 percent from the field and 43.1 percent from 3-point range. In my opinion, he’s running away with the MAAC Player of the Year award. The next closest scorers in the conference are Iona’s E.J. Crawford at 17.6 PPG and Saint Peters’ Davauhnte Turner at 16.6 PPG. It’s not even close.

“I would think (scoring 55) would help (my MAAC Player of the Year candidacy) a lot,” Young said. “I think it means a lot that we won the game. We probably wouldn’t be here if we lost the game – 55 in a loss isn’t as good as 55 in a win. Winning the game and scoring that should help me a lot.”

If Quinnipiac can stay near the top of the standings, Young has a chance to be a unanimous choice for the award. As mentioned before, Quinnipiac (9-5) is tied with Canisius at the top of the MAAC standings. The problem is that two games separate first place from Manhattan (7-7) in eighth. The smallest slip-up over the final four games of the season could send the Bobcats tumbling down the standings.

“I think to win a regular season championship in our conference is something that we would take great pride in, but it’s not something we talk about,” Dunleavy said. “We spend all of our time talking about the next game. If we do a really good job preparing for the next game, that’s how you win a conference championship. We would love the opportunity.”

At the top of the standings, the Bobcats still aren’t satisfied with where they’re at.

“A lot of coaches in our league are probably saying ‘We haven’t been consistent,’” Dunleavy said. “There’s a logjam (of teams) between seven, eight and nine wins right now, and there’s a lot of coaches – including myself – saying that there’s one game or two games that we had in our grasps and we weren’t able to finish out. So we’re happy with where we are, but I really don’t think we’re where we need to be.” 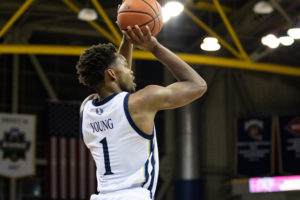 [/media-credit]As for Young, he’s exactly where he needs to be. This season has been different for Young – not only as a player, but as a person.

“As a person, he’s more comfortable in his shoes,” Dunleavy said of Young’s progression off the court this year. “From high school to junior college to playing for two different (Division I) college coaches, there was a lot of uncertainty in terms of ‘How do I become the best version of myself?’ I think finally he’s settled into it – he understands that he belongs.

“Even last year at times I think he was questioning if this was really what he was meant to be. I think his confidence has grown. He’s still a quiet and unassuming guy, very introverted personality, but a great teammate.”

Young’s progression as a person off the court cannot be overlooked during this breakout campaign.

At the end of Young’s magical performance, one question to ask is simply “What’s next?” He’s scored 1,000 points, he’s broken scoring records – both Quinnipiac and NCAA – and he’s playing the most efficient brand of basketball of his life.

At the beginning of this piece, Young and I both told you we were at a loss for words. Here we are over 1,000 words later, and I still don’t believe what just happened. Young’s 55 points at the Times Union Center will be remembered in Quinnipiac basketball history forever.

Are you kidding me?