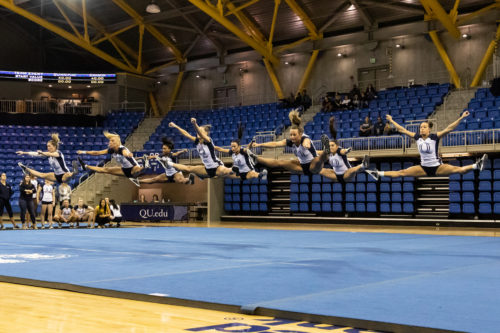 The Quinnipiac acrobatics and tumbling team lost its season opener on Sunday to Oregon in an Eastern College Athletic Conference (ECAC) showdown by a score of 268.605-264.775.

The meet was preceded by a moment of silence for Lauren Jones, a former Oregon Duck, who passed away in 2015 after there was an outbreak of meningococcal disease on campus. This would have been her senior season with the Ducks. 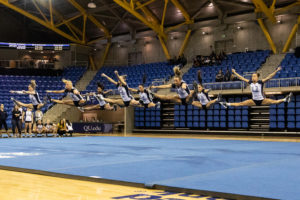 [/media-credit]“I think it’s really important,” Quinnipiac junior top Melanie Mancini said. “I think it’s important to honor her and her memory as someone who was on a team and a part of this league and this sport.”

After an acro event saw the Bobcats lose by 2.65 points, they kept the next two events close, including a tie in the toss event. They lost the tumbling event by 1.6 points before winning team.

“Good beginning, right where I want them to be,” Quinnipiac head coach Mary Ann Powers said. “One disappointing round, but not by them. I think that we just had to settle down a little bit. I don’t know if it was adrenaline going a little bit haywire. After they got that out, what it showed me was they’re very mentally tough because I think some people would’ve folded, they decided to keep on going.”

Mancini looked like she never left the mat as she was one of Quinnipiac’s top performers on the day. She scored a 9.525 in the tumbling open pass before teaming up with sophomore top/base Cassidy Osher to score a 9.200 in the duo pass, which they won.

“Melanie Mancini is a rock star,” senior base and co-captain Allie Williams said. “Every single time I watch her, she impresses me more. She is a great athlete, she does everything; she tumbles, she tops, she does it all. Not like anything was different today, she did amazing like she does at every meet so i’m really proud of her.”

Mancini is being looked at to fill the shoes of former co-captain and top Abby Ziser, who graduated with the class of 2018. Mancini, like Ziser, was named to the 2018 ECAC all-conference team.

“If Melanie Mancini is not an all American, or player of the week…,” Powers said. “That kid carries more scores, she is so tenacious. She attacks things and I love that about her. She’s great.”

The Bobcats look ahead to another tough task; they travel down to Waco, Texas on Sunday, Feb. 24 to take on the Baylor Bears for a rematch of last year’s National Collegiate Acrobatics and Tumbling Association (NCATA) finals.

The Bobcats haven’t beaten the Bears since the team was known as the women’s gymnastics team back during the 2013-14 season. Since that win, they’re 0-6 including a loss in the NCATA semifinals and the NCATA finals.