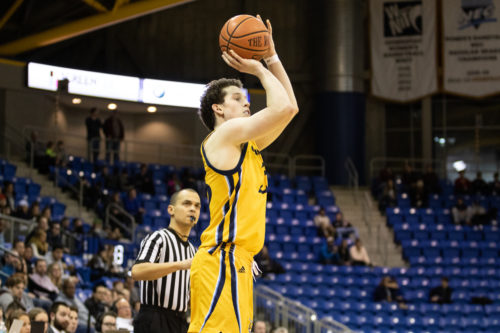 Riding off the heels of an overtime thriller, you would think the same thing wouldn’t happen again. It almost did as the Quinnipiac men’s basketball team (13-11 overall, 8-5 MAAC) fell short 63-61 to the Marist Red Foxes (11-14 overall, 6-7 MAAC) in another final minute push on Friday in Hamden.

As for Quinnipiac head coach Baker Dunleavy’s thoughts on this game, he felt his team didn’t play the full 40 minutes to earn a win.

“I think the majority of that game was dominated by Marist,” Dunleavy said. “It was just us missing a couple shots and them playing a hard tough-branded defense and credit to them on that.” 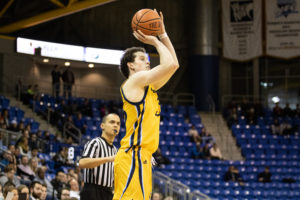 [/media-credit]Marist had been able to set the tone throughout the game due to their senior duo of guard Brian Parker and forward Ryan Funk. Parker showed why he’s third in the MAAC in field goal percentage as he went 6-8 from the field finishing with 12 points and six assists.

Funk demonstrated why he’s fifth in the MAAC in threes taken per game as he took 10, made three and finished the game with 10 points.

Another aspect to Quinnipiac’s struggles was shooting. The Red Foxes defense held the Bobcats to 33.3 percent from the field and 30.8 percent from three in the first half. Quinnipiac previously scored 92 points against Marist, but only scored 61 its second time around.

“(Marist) played its game even better,” Dunleavy said. “It was a forced tempo type of game and they just executed better at what they do.”

In the second half, the Bobcats gradually started to adjust to the Red Foxes defense and it certainly affected senior guard Cam Young, who scored just eight points in the first half. Young  finished the game with 24 points and went 8-13 from the field.

“(Young) was able to get more comfortable throughout the game and become more aggressive,”  Dunleavy said. “Even on a night went we didn’t shoot it well, we had 15 assists and 20 made baskets. In the second half, we did a better job of sharing the ball but throughout the game Marist was locked in defensively.”

Similar to Tuesday’s matchup against Rider, when the clock struck its final minute, something awoke inside the Bobcats, and baskets started to fall in. Sophomore forward Jacob Rigoni and freshman point guard Tyrese Williams each made threes to cut the lead within five. Then, sophomore point guard Rich Kelly made a three with 1.8 seconds left, but Marist wisely missed its second free throw and didn’t give Quinnipiac a chance to win the game on an easy shot.

“We just had a better sense of urgency,” Dunleavy said. “Once you’re down, you play freer, looser and with more aggressiveness. We definitely needed that aggressiveness earlier in the game.”

The Bobcats will have little time to think about this game, as they travel to Siena (13-13 overall, 8-5 MAAC) on Sunday. Quinnipiac currently sits at second in the MAAC behind Monmouth and a win would only increase its chances in getting first place.