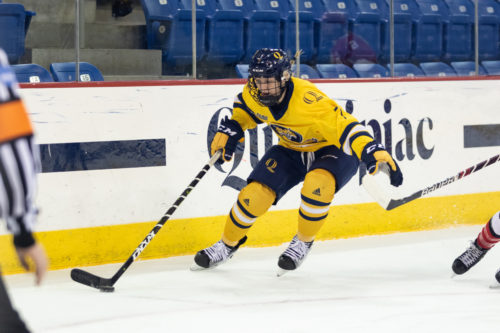 With the Quinnipiac women’s ice hockey team hanging on to the last playoff spot, two points ahead of Yale in the ECAC hockey standing, Quinnipiac needed a big win to expand its gap. It caught that break Friday night as Quinnipiac earned a 4-0 win as it faced off against the Rensselaer Polytechnic Institute Engineers.

Quinnipiac (11-16-4 overall, 8-9-2 ECAC Hockey) came right out the gate with offensive pressure that didn’t slow down, giving RPI (12-14-5 overall, 9-9-1 ECAC Hockey) few chances to produce on its own. Quinnipiac’s senior forward and captain Melissa Samoskevich had herself a big night with two goals. 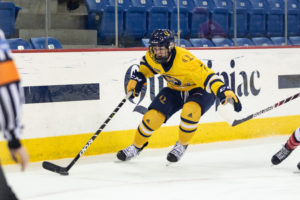 [/media-credit]“I thought we played well tonight,” Quinnipiac head coach Cassandra Turner said. “We’re a team that has talked about building and growing…I thought we really grew and how we are looking. I think it was a good step for our program building into tomorrow.”

From the start of the first period, Quinnipiac started off strong, applying pressure to RPI and it would eventually pay off. Just three minutes into the first period, the captain and team scoring leader senior forward Melissa Samoskevich got the ball rolling with the first goal of the night and her 10th goal of the season. Then just six minutes later, junior forward Sarah-Eve Coutu-Godbout took advantage of a defensive error behind the net and put one in the net, making it 2-0 for the Bobcats.

The scoring didn’t stop there for the Bobcats, just three minutes later, sophomore forward Grace Markey squeezed one through RPI’s senior goaltender Lovisa Selander to make it 3-0. At the end of the first, Quinnipiac was dominating RPI 3-0 with the shots being 14-6 in favor of the Bobcats.

“Our goal is to be in that position tomorrow,” Turner said on the team’s defensive efforts. “It helped because we had the puck so much, we fought really hard to possess the puck and after we got our chances to pressure quickly.”

The third period had a slow start to it, up until the captain came onto the ice. Samoskevich picked up the puck from linemate senior forward Kenzie Lancaster and buried one into the back of the net, making it 4-0 Bobcats.

That would be the last goal standing for the game, with Quinnipiac picking up a huge win to stay in playoff contention. Ives picked up her fifth shutout of the season, and her 10th of her career.

“We can’t do anything about the past,” Samoskevich said on the last couple games of the season. “If we just keep focusing on the future and on how we’re playing, I think we’re going to be in a good spot.”

Quinnipiac looks to keep the momentum going as it takes on Union on Saturday, Feb. 16 at 3 p.m. in what could be the Bobcats last home game of the season.