A state of change 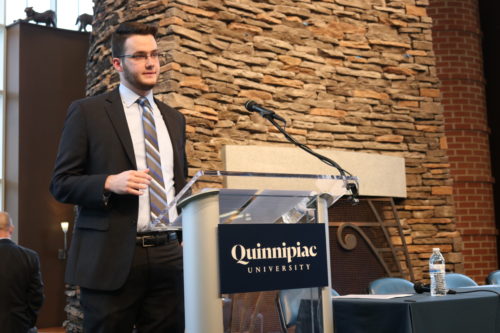 Quinnipiac University is in a state of change, according to President Judy Olian’s opening remarks at the State of the QUnion address on Wednesday, Feb. 6.

“The only thing that we can talk of as constant is actually change,” Olian said. “And we need to be the university that is agile enough to not just keep up with the change but to actually lead it.”

The catalyst of change is the University-Wide Strategic Plan. The plan was summarized by Olian again at the address, but the full version can be found on Blackboard. 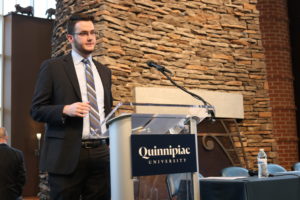 [/media-credit]Some students like freshman journalism major Isabel Agricola wished Olian’s address had given more specifics on a time frame for the changes.

“I thought it was very informative to hear exactly what the strategic plan does for the school, and it’s very exciting to hear,” Agricola said. “I would love to know more about the timeline for it.”

The State of the QUnion, which is hosted annually by the Student Government Association (SGA), provides an opportunity for Quinnipiac students to ask questions of President Olian and members of her cabinet.

Vice President of the Student Government Association, Luke Ahearn, moderated the discussion. Ahearn believes that the State of the QUnion is an important forum for students to interact with administrators.

“The State of the QUnion is a great event SGA has been hosting for a few years now,” Ahearn stated in an email. “The reason it is a great event is because it [holds] administrators accountable and gives a public forum for students to know what is being done to improve Quinnipiac University. It also is a way for administration to interact directly with students and often the questions students bring issues to the attention of administrators.”

Students were able to submit questions for the panel on an online platform called slido.com prior to and during the address. Attendees were able to view the questions that their peers had submitted and vote for the ones they wanted to hear. Like Olian, the students’ questions demonstrated that they, too, were ready to see lots of changes in Quinnipiac’s future.

Some questions were responses to changes that have already resulted from the strategic plan, such as the closure of Quinnipiac’s radio station, WQUN, and the student-led petition that has circulated to protest the closing. The question, which was submitted electronically, asked whether the outpouring of support will save the station.

President Olian expressed that in order for Quinnipiac to become “the university of the future,” it is important to reexamine priorities and realize that in order to grow, some things have to be cut.

“In the decision to change course, change is difficult,” Olian said. “When we think about our future strategy and the need to move and invest in new things, I don’t think any university, even the wealthiest university, can add on and keep adding things on without ever examining and reexamining what we’re doing.”

General Manager of the WQAQ student-run radio station, Emma Spagnuolo, is disappointed that President Olian has not backed down on her decision to close the radio station.

“There are over 100 active members of the student-run station, WQAQ, many of whom plan to work in radio after graduation,” Spagnuolo said in a statement. “For administration to say that students aren’t interested in radio as a career is simply inaccurate. I’m also disappointed because the station serves as a tie between Quinnipiac and the larger Hamden community. Over 850 people have signed the online petition to save WQUN, so clearly the community sees value in the station.”

The Center for Religious Life

Another question expressed concern that the religious center on campus appears to be relatively exclusive to Catholicism. It addressed whether the university would consider expanding the facility to include more religions as some students feel left out. Dean of Students Monique Drucker, took this question.

“First I think it is really important that everyone know that we are absolutely committed to creating a space that is welcoming to our students and the center for religion does do that,” Drucker said. “We have received requests from outside of the Catholic community to host events there. We are absolutely willing to do that. I think what I love to hear is ‘what would be more helpful?’ If you don’t feel that is a welcoming environment, what would be helpful to that?”

Freshman occupational therapy major, Sarah Bugbee, practices Protestantism and has grown up going to church every Sunday. She expressed that not having a place to go to church here at Quinnipiac has been difficult.

“While I know everyone is welcome at the chapel services, I wasn’t raised Catholic so I’m not the most comfortable in that kind of church setting,” Bugbee said. “I would love to see our community expand their religious service opportunities to be more inclusive for people of varying denominations such as myself.”

Other inquiries expressed overall dissatisfaction with the value of a Quinnipiac education. The question stated that some students feel as though the cost of tuition “does not match the student experience” and asked what plans the administration had in store in addition to the strategic plan to solve this issue in the future.

“You can see that the tough questions are coming down,” Thompson said, drawing a snicker from the audience. “I can’t accept the qualifier other than the strategic plan because I think that’s the whole point of the plan.”

Dr. Zin used statistics from her notes to counter the claim that the student experience is falling short of what students are paying for it. She cited the career success rate which is measured six months after graduation.

Zin also mentioned that competitor institutions such as Fairfield University have ranked no higher than 96 percent for the career success rates.

According to fairfield.edu, the Fairfield class of 2017 achieved 98 percent job placement six months after graduation as well.

One student asked how the university plans to accommodate students who will be traveling to Quinnipiac from outside of the Northeast.

“I personally would love to have a direct flight to the west coast from Tweed airport,” Olian joked.

However, Olian’s desire to diversify Quinnipiac’s geographic demographic is no joke. The university is making an effort to broaden the geography of its applicant pool, particularly in Florida, Texas and California.

“We brought a consultant in earlier this year and we recognized that for inclusive excellence reasons and for continuing the high quality of our student body we needed to diversify the geography of our student body we go to,” Olian said. “We created a real campaign to enter Florida. Florida, Texas and California are the most diverse and growing pools of applicants.”

Florida will be the most accessible of the three, but Quinnipiac is making an attempt to “dip our toe” in the Pacific Ocean and appeal to more Californians Olian said.

“We have created an approach strategy into Florida using social media,” Olian said. “Texas, not so much yet because Texas as a state has policies that keep Texans in Texas. We’ve talked about going into California and we’ve started to dip our toe into the water.”

The speech concluded with a session of myth-busting, which allowed students to hear the administration’s interpretation of some well-known Quinnipiac legends.

One questioned whether it was true that the recycling and trash end up in the same place after leaving the residence halls. While the notion drew a laugh from the audience, Filardi did not deny that this occurs sometimes because much of what happens with the waste is out of Quinnipiac’s hands.

“Even when we separate and we bring it to the facility, they mix it together,” Filardi said. “Depending on where you are and what opportunities there are for recycling, sometimes that is the case where things are mixed together.”

Olian added that a desire to strengthen the sustainability of the university is one main piece of feedback she has received on the strategic plan. Like any big changes coming to Quinnipiac, it won’t happen immediately.