Breaking barriers on the slopes 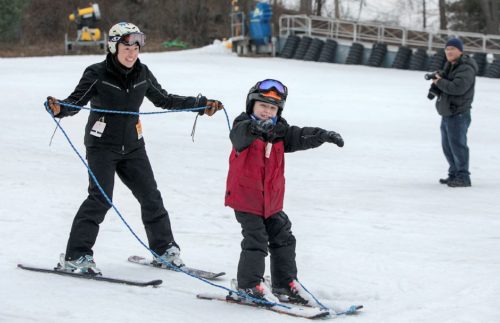 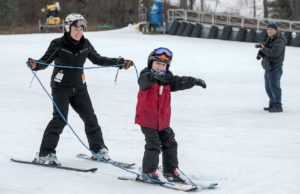 [/media-credit]Quinnipiac students and faculty are spending their winters teaching students with disabilities how to ski at Mt. Southington.

Skiers Unlimited is a program that started over 30 years ago when a nurse at Connecticut Children’s Medical Center (CCMC) decided to start a ski program modeled after one she found out about in Denver, Colorado.

Now retired professor of physical therapy at Quinnipiac, Richard Albro, was doing his sabbatical work at CCMC when he was approached one day and asked if he knew how to ski. Before he knew it, he was volunteering with other CCMC employees at the mountain. Albro was impressed and realized the program would be a great opportunity for students at Quinnipiac to get involved with.

When the nurse who founded the program left the medical center, she asked Stephen Balcanoff with Community Relations for CCMC to take over the ski program. Balcanoff then worked with Albro to recruit students from Quinnipiac to volunteer, hosting recruitment sessions and orientations at the university.

Professor of Occupational Therapy Martha J. Sanders is one of the many faculty members that spends her Fridays at Mt. Southington. She said Quinnipiac students have been a part of the ski program for the last 20 years, but participation has really grown in the last five years.

“Along with more seasoned volunteers, we take any kids and we progress them from not skiing at all to hopefully being more independent and going down the hill,” Sanders said.

Professor Sanders said the program really focuses on the kids, not on their disabilities.

Micah Cutler, a first-year occupational therapy graduate student, has volunteered with Skiers Unlimited for the past few seasons. He said he saw a recruitment flyer lying around one day and decided it was something he would love to be a part of.

“We usually get paired up as two volunteers to one kid, and we teach them how to ski,” Cutler said. “Sometimes, the goal is just to get the kid out of the car and put their boots on then working up to going down the hill. Other times, you’re just skiing alongside of them and they’re able to do it all and just need a few pointers and reminders.”

About 20 to 25 children are a part of Skiers Unlimited. They come from all over Connecticut and all of the children have some sort of intellectual disability or physical disability, Cutler said.

“Common [diagnoses] are autism spectrum disorder, cerebral palsy, general stuff like that,” Cutler said. “A lot of kids just need a little extra boost, a little help, but they are very capable of doing it on your own.”

Balcanoff said Mt. Southington is an incredible partner and they have a tremendous relationship with the medical center and the Skiers Unlimited program. They allow children and their families to ski for free on Fridays and have never asked for a dime. Mt. Southington staff even built a shed for Skiers Unlimited to use to store their gear with no charge, according to Balcanoff said.

Alpine Haus, a ski and snowboard shop in Wethersfield, has also been an incredible partner involved with Skiers Unlimited, according to Balcanoff.

The shop does boot and ski fittings for the children early in the winter. Used and rental gear from their shop goes to the children for free.

“They treat families as if they are royalty coming from (the) program,” Balcanoff said. “I can’t get over the customer service aspect of it all.”

Skiers Unlimited has given students like Cutler the chance to be a part of something that reaffirms the fact that a lot of people are way more capable than their disability makes them appear.

“Once they’re given a diagnosis of a disability, people really put them in a box,” Cutler said. “This just proves to the world what people with disabilities are capable of; almost anything that under the right circumstances and with the right support. With the right help, they’re able to break through the barriers that society puts up for them.”

Balcanoff s aid what is really important to him is to get the students to appreciate what they are doing.

“The program would be half its size and half as successful if it weren’t for Quinnipiac,” Balcanoff said. “I try and make sure the impact and connection they have on the families can be life changing. It may be subtle at first, but later, there are those ‘ah-ha! moments.’”