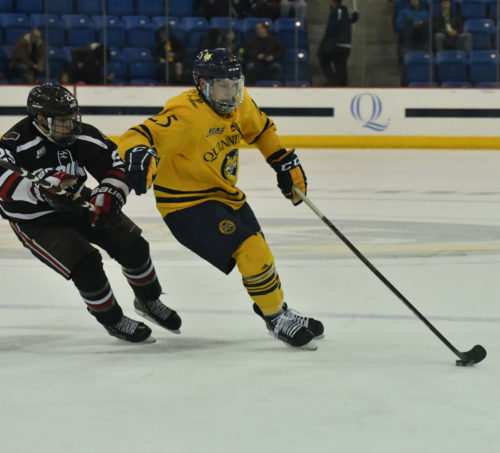 In an electric atmosphere at Frank Perrotti Jr. Arena, the No. 4 Quinnipiac men’s ice hockey team was defeated by Brown 4-1 on a chilly Saturday night in Hamden, Connecticut.

“I thought Brown was great tonight,” Quinnipiac head coach Rand Pecknold said when giving his opening statement. “I thought Luke Kania was by far the best player on their team. He was outstanding and we couldn’t score, causing frustration and our players didn’t handle it well. Brown is a very good team tonight and we struggled defending. We didn’t have a good effort.”

Like Friday night, Quinnipiac (21-6-1, 10-5-1 ECAC Hockey) came out firing in the first period. Though it outshot Brown (10-10-3, 7-6-3 ECAC Hockey) for all three periods, it was its defense that slowly fell apart throughout the course of the game, eventually falling apart in the third period. 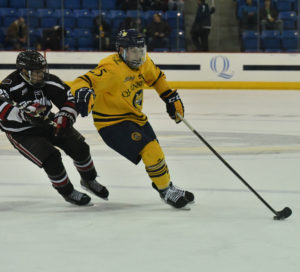 [/media-credit]Brown and Quinnipiac both had their opportunities in the first period, but were denied by the goalies who were behind the net due to outstanding goalkeeping by both Quinnipiac’s junior goalie Andrew Shortridge, who had 25 saves on the night, and Kania, who had an astonishing 47 saves on the night.

At the end of the first period, Quinnipiac dominated the shot chart, putting 14 shots on goal, compared to Brown’s seven. Yet neither team was able to convert their shots into goals.

In the second period, it looked as if Quinnipiac’s momentum at the beginning of the game started to shift in favor of Brown, as junior forward Brent Beaudoin of the Bears fired a shot set up by sharp passes from freshman forward Justin Jallen and senior defenseman Max Gottlieb to shoot the puck right past Shortridge near the middle of the second period.

The Bobcats had their chance to tie the game at one, as sophomore defenseman Joe O’Connor was in front of the net with the puck after trying to get the puck in the net, but was stopped short of doing so by the outstanding goaltending of Kania.

In the midst of the barrage of goals, the Bobcats were able to get a goal of their own to avoid the shutout, with the goal coming from junior defenseman Brogan Rafferty, getting his fourth goal of the season.

Pecknold talked about the collapse in the third being due to the poor preparation of the game and how they were lacking in scoring.

“I just think we prepared poorly,” Pecknold said. “Bad habits and lots of kids were playing frustrated due to the lack of scoring. We were dishonest and they deserved to win because of it.”

Pecknold went on to talk about how the team could improve from the loss.

“We didn’t do a good job of taking away [Kania’s] eyes off the puck,” Pecknold said. “We need to do a better job of that.”

The Bobcats look to come with a vengeance as they play the Union Bulldogs on Friday, Feb. 15 at Messa Rink in Schenectady, New York at 7 p.m.