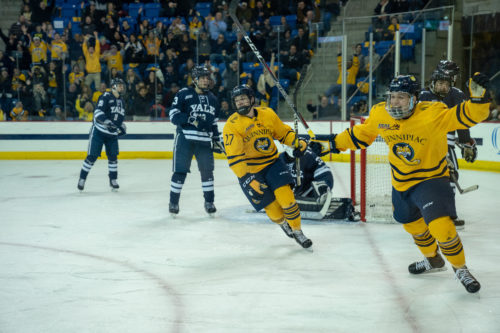 In a rocking Frank Perrotti Jr. Arena with golden-cladded fans all over the rink, the No. 4 Quinnipiac men’s ice hockey team took down Yale in the first of the two games in Battle of Whitney Ave by a score of 4-0 on Friday night in Hamden.

Quinnipiac (20-5-1 overall, 10-4-1 ECAC Hockey) was hot as soon as it hit the ice and it continued a dominant performance all game. It outshot Yale (11-8-3 overall, 9-5-1 ECAC Hockey) 50-23 and had four different goal scorers. Junior goaltender Andrew Shortridge finished with 23 saves and picked up his fourth shutout on the year. 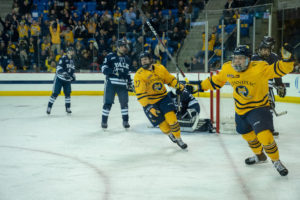 [/media-credit]“I thought it was a great effort tonight,” Quinnipiac head coach Rand Pecknold said. “The boys were locked in, the forwards were excellent, they were just relentless for 60 minutes. [Shortridge] did his job. The rink was rocking, it was a great atmosphere, fun environment and we were happy to take advantage of it.”

After a dominant opening five minutes where the Bobcats fired 12 shots on net, but no goals, senior forward Nick Jermain put in a rebound for his first goal on the year.

Couldn't have been a more perfect time for Nick Jermain's first of the year. 1-0 QU under 12 to go#ECACHockey pic.twitter.com/tV0EekMeNL

“It was good, it was kind of like a monkey off my back,” Jermain said of scoring his first goal this season. “It felt good to get it off, especially against Yale in front of the crowd it was nice. Hopefully it opens the floodgates and I can get some more.”

Yale and Quinnipiac exchanged late chances, but neither team could capitalize and the first would end with a 1-0 Quinnipiac lead.

In the second period, Quinnipiac’s momentum smoothly transitioned from the first frame as freshman forward William Fallstrom finished off a pretty passing play from senior Craig Martin and freshman defenseman Peter DiLiberatore with his doorstep tap-in less than three minutes in.

Then just a couple minutes later, senior defenseman Luke Shiplo walked in on the right side and slipped one in through the five-hole of Yale junior goaltender Corbin Kazcperski to extend the Quinnipiac lead to 3-0 less than five minutes into the second.

“Every time you score against Yale in this atmosphere, it’s unbelievable,” Shiplo said, who also scored in Quinnipiac’s home game against Yale his freshman year.

The third period provided lots of extra scrums after whistles and multiple big hits, including a high elbow to sophomore forward Odeen Tufto, who stayed down on the ice for awhile but returned shortly later. As for the scoring, Yale was again held without a score, while Quinnipiac added an insurance goal late by freshman forward Michael Lombardi to polish off a 4-0 win.

With the win, Quinnipiac maintained the Heroes Hat award for the seventh straight year, the award given to the winner of the Quinnipiac and Yale game played in Hamden. The award has been in place to remember Joseph Mascoli, whose kids both graduated from Quinnipiac, and others who lost their lives in the 9/11 attacks in New York.

This win came without senior defenseman Brandon Fortunato, who is third on the team in points and tied for first in assists. After the game, Pecknold did not make a comment on Fortunato’s injury or any timetable for a return.

In regards to the conference, this was also a big two points for Quinnipiac. It pulls ahead of Yale to now sit alone in the No. 2 spot in the standings with 21 points.

“It’s really tight, the conference right now,” Shiplo said. “You got to pretty much win every game throughout the rest of the season here in conference just to stay up in the top four. So this was a huge one. [Yale] was fighting for a spot with us, so that’s almost a four-point game there…We’re confident, we’re on a five-game heater so we have to go to just keep flowing with it.”

Quinnipiac will finish off the weekend with a game against Brown at the Frank Perrotti Jr. Arena on Saturday night at 7 p.m.