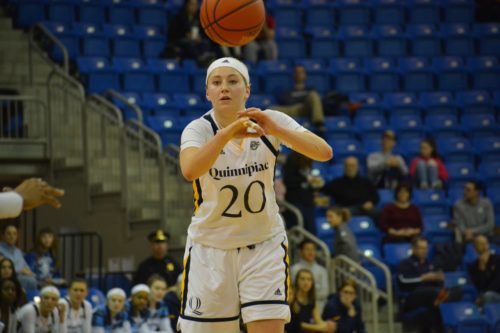 Despite finishing the game in dominant fashion, the Bobcats struggled to start the game. They shot 31.4 percent from the field and 8.3 percent from deep in the first half of play.

“I’m going to credit Niagara,” Quinnipiac head coach Tricia Fabbri said. “They came out really feisty, ready to compete. Up at their place, we came out and scored 36 in the first quarter. This is a team that had been on a roll, winning seven out of their last nine and were ready to come out show a very different Niagara team, and you saw that tonight.” 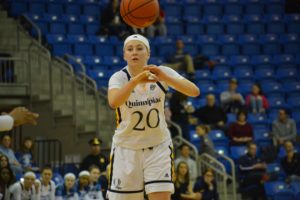 [/media-credit]Not all was bad for Quinnipiac in the first half, though. The team were locked in on the defensive end at the start of the second quarter. The Bobcats limited the Purple Eagles to only seven points in the quarter.

“We’ve been able to build an incredible confidence from our defensive end,” Fabbri said. “That’s going to be a staple for us.”

Leading 32-21 heading into the half, Quinnipiac looked to add to the lead with its defensive prowess and domination on the glass.

“Well, I’d say half of it were from my missed layups,” Strautmane said jokingly. “But that’s what coaches tell us to do. Just go offensively rebound especially us post and the three. We usually have one or two people back. That should be like that all the games, not just one.”

Quinnipiac came out in the second half with the same intensity of defense but began finding its rhythm on offense. The team got out to an 11-point lead following an and-one from senior guard Edel Thornton.

The Bobcats used this momentum to take over the game in the fourth quarter. With 7:57 minutes remaining in the fourth, the Bobcats were up 54-35. Fabbri credits the defense for how the team dominated in the second half.

“That’s been a consistent identity,” Fabbri said. “I think really throughout the course of the season, we’ve had more nights where the ball is not going in for us, and we’ve relied so heavily on our defense.”

Quinnipiac will look to continue its winning streak on its senior day against Canisius on Saturday at 2 p.m. Fabbri is no rush to get redshirt senior Jen Fay back but is optimistic that she’ll return soon.

“I thought [Fay] would play today, but it’s still bothering her – the bone bruise – so there’s no need to rush her back. Obviously, eyes are on the prize in March,” Fabbri said. “We’re anxiously awaiting her return, but this team has picked up the mantle.”