A storm of ideas 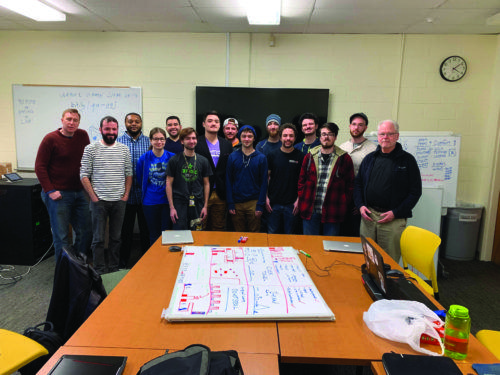 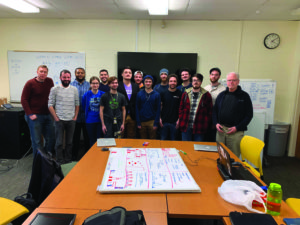 [/media-credit]A crowd gathered in a Tator Hall classroom on Jan. 25, and amidst baited breath, the theme of this year’s event was announced. Within minutes, ideas began to buzz and creators teamed up. The Global Game Jam had just begun.

This was Quinnipiac University’s 6th year hosting the Global Game Jam (GGJ), an event in which people gather together to make games in just 48 hours. It is the largest event of its kind. Last year, the GGJ was hosted in 108 countries and over 8,000 games were made. All around the world, programmers and artists go to these locations to find out the annual theme and make games based around it.

Quinnipiac’s event was coordinated by Game Design and Development (GDD) professor Jonah Warren and sponsored by Ron M. Burgess, a Quinnipiac alum who now works at Spheregen, a New Haven company that specializes in virtual and augmented reality. Both of them participated amongst Quinnipiac students in this year’s GGJ.

“It’s just fun,” Warren said. “It makes creating games less serious and more accessible just by having this time limitation. You can’t spend weeks, you can’t spend months, you just have to make something quick and easy. So that in itself is kind of liberating.”

Clay Stewart, a senior GDD major, worked with his team to create a strategy game about defending your home from invaders. Despite the time constraints of the event, Stewart didn’t find the game jam to be overwhelming.

Each game was inspired by the same theme, “home”. “Survive the Night,” by Zachary Singer and Brian Young, is a game about lighting lanterns to protect your home from ghouls that thrive in darkness. “Together,” by Casey Foster, Rick Velez and Ron M. Burgess, is a multiplayer platformer game in which two players work together to make their way home. “Arcaid,” by Jonah Warren, is a snake-like arcade game in which you collect balls and bring them home—but you can only move in a spiral-like pattern around the stage.

The time limit and creative atmosphere of the GGJ often inspires game developers to create games they wouldn’t have otherwise made. Often, these games become much greater than mere weekend projects. It’s common for game jammers to build onto games they made in the GGJ, expanding them to be attractive portfolio pieces or even best-selling indie games. Many Quinnipiac game jammers plan on taking their games into the future, whether it’s for school, their career or just for fun.

“We plan on working on the game for a class assignment,” Stewart said. “We basically created a prototype build, and now we’re gonna polish it and make it more alive. The hope is also that what we’re making will be portfolio ready, so we can show it off to employers.”

Lindsay Grace, the Vice President of the GGJ and associate professor at University of Miami, visited Quinnipiac on Jan. 31 and gave a presentation to students about the benefits of game jams. The next day, he met with GDD students at Quinnipiac to talk to them about video games and answer any questions they might have about his work.

“The GGJ does a spectacular thing in that it helps people gain access to games,” Grace said. “It has introduced games to communities that wouldn’t normally play them or design them.”

Warren believes that the most important reason to participate in the GGJ isn’t to put something on a portfolio nor to design the next hit game. Rather, it’s about having fun and learning new things.

“The event is oriented towards keeping it lighthearted, meeting people and having fun,” Warren said. “Ultimately for our students, it’s most beneficial in just doing this for fun; not having a huge attachment to what you make, and learning and meeting people along the way.”

In addition to the GGJ being a fun opportunity for game developers, it also helps to make the assortment of games that are available to consumers more interesting and diverse. Many of today’s game designers are interested in breaking the mold of traditional video games.

“Diversity of play is a really important place for games to go,” Grace said. “It’s important to increase the opportunities for everyone to make games, but it’s also important to offer a wider range of gameplay experiences.”

Warren is hopeful that in the future, games will be that diverse. But there are still hurdles to get over.

“There’s been kind of an indie revolution which is great to see, but I still think games are very much affected by industry,” Warren said. “For example, people don’t question that every game is built around the same types of controllers. It greatly limits the types of games that can be created. My hope is that in the future, we’ll be more cognizant that current games are so affected by commercial pressures and we’ll embrace alternatives.”

Stewart reiterates the idea that the current video game industry is hurting game consumers, rather than helping them.

For gamers like Stewart, it’s important that there is always a selection of good games on the market. He argues that video games are important for society, as they do much more than simply entertain us.

“There was a time when a lot of my friends were suffering from mental issues, and I don’t really suffer from the same mental issues,” Stewart said. “I felt like I couldn’t sympathize with them like their other friends could—until I played a game called ‘Night in the Woods.’ It revolves around the things that many college students experience—anxiety, depression, all of that stuff. It opened a window for me to see what my friends go through. It gave me that chance to understand.”

Thought-provoking indie games like “Night in the Woods” aren’t the only games that can improve our social lives, according to Stewart. He says that almost any multiplayer game can help bring friends closer together.

“Even playing casual games can help you keep that bond with your friends,” Stewart said. “I have friends from elementary school and middle school that I still talk to. We just set aside some days to hop on the computer, start a call with each other and be like, ‘Alright, what do we wanna play? The circulation of emotions that games provide help strengthen our bond with each other. Even though we’re all in different states, for a moment, we’re all together. Even if it’s just for a few hours, it’s time well spent.”