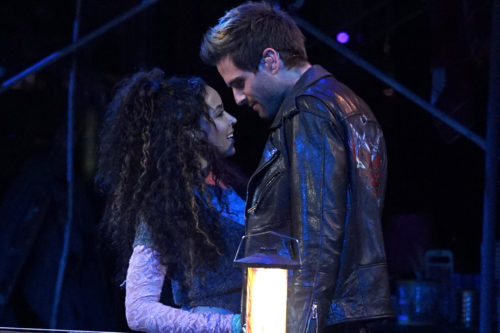 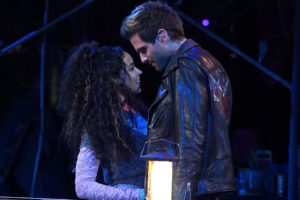 [/media-credit]FOX aired a new production of “Rent” on Sunday, Jan. 27, in what has become a trend among networks in airing live productions of famous musicals.

“Rent,” the musical sensation written by the late Jonathan Larson, opened to rave reviews and even bigger cheers of excitement from audiences in 1996. Loosely based on the opera “La Boheme,” it concerns a group of people who struggle with love and, most tragically, the AIDS epidemic.

Unfortunately for this production, a tragic mishap occurred. Brennin Hunt, who was cast in the absolutely essential role of Roger, broke his foot the night before the live telecast and, as a result, could not perform. However, the show still went on as planned in a different manner.

It was not live. FOX aired the final technical rehearsal instead for the majority of the show with the final moments of it being performed live.

The production started out a little rocky and production’s scenic design was built as an expansive field of scaffolding and ladders. Unfortunately, this led to the first number being a little choppy in terms of camera work and editing. Every few seconds, the camera panned to a new area of the stage, which made the moment feel unorganized. Luckily, this was the only moment that had unpolished camera work.

From there, the production was fine until the number entitled “Today 4 U,” which is primarily performed by the character of Angel (Valentina). Valentina, out of the entire cast, was most affected by the airing of the rehearsal performance, as most of her singing in this particular number was off-key. In addition, Valentina’s acting was subpar. The role of Angel is supposed to be the heart of the show, as well as the acting showcase. This is why, when Angel tragically dies, it is all the more emotional. However, since Valentina made no emotional connection or showed any other expression on her face, the death of Angel felt more barren and devoid of emotion.

The rest of the performances by the cast were spectacular, particularly those by Hudgens, Fisher, Hunt and Victor Dixon. Hudgens played the role of Maureen with dramatic flair. I must admit that when I heard Hudgens was cast as Maureen, I was skeptical. I did not believe she had the vocal chops to pull off the role, but she was phenomenal. Fisher added a cute boyish quality to the role of Mark, which greatly improves the character’s likability and presence in the show. Victor Dixon, who impressed in NBC’s “Jesus Christ Superstar Live in Concert,” did incredibly well with the role of Collins. His voice, in particular, was most effective when singing the emotionally vibrant material.

When the production dug deep into emotional territory, that was when it really soared. The heartbreaking number “Will I?” was performed with emotional intelligence and vulnerability. The musical number concerned the cities various AIDS patients and their complicated questions surrounding their future. It was quite a sad number and the production never diluted that fact. The performance was done in one complete shot moving from person to person around the set emphasizing the connection and torture of these sad moments.

The telecast ended with a bang as the original cast members of the original Broadway production came out to sing the shows most iconic song “Seasons of Love.” This had to be the most exciting musical number of the night. An utterly triumphant moment that made this production feel very full circle. Overall, the show offered an entertaining night of television, despite some hiccups here and there, while also showcasing an aura of robustness.