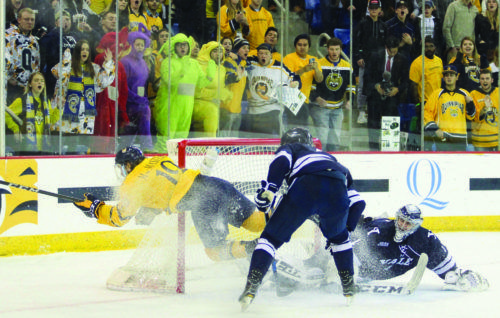 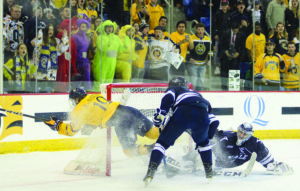 Both universities have highly touted men’s ice hockey programs that compete in the ECAC Hockey conference. Each have enjoyed successes and defeats against each other since 2005 when Quinnipiac joined the conference.

For almost 15 years now, those eight miles have separated the hate that each team has for each other in the best rivalry in Connecticut hockey.

It hasn’t always been a hateful relationship between Yale and Quinnipiac. The rivalry technically began 2005, but I believe it didn’t really start until about six years ago. On a day that could have been a historic day in Quinnipiac men’s ice hockey history for a great reason. But instead, a day that most may likely want to forget.

I’ll bring it back to April 13, 2013, in Pittsburgh, Pennsylvania, at the Consol Energy Center. Two teams, with the campuses just miles apart in Connecticut, were the final two teams remaining in the NCAA hockey tournament.

Quinnipiac had dominated throughout the year. Going into the tournament, it was the No. 1 ranked team in the country, despite being knocked off by Brown in the ECAC Hockey semifinals. It had already beaten Yale twice in the regular season and in the consolation playoff game for third place. So it was no surprise to see the Bobcats in the national finals.

For Yale, it was a story of upsets. It had finished third in the ECAC Hockey regular season, but was able to get in as one of the final four teams in the NCAA Frozen Four tournament. Yale preceded to knock off Minnesota, who was ranked No. 2 in the country, and then beat North Dakota to win its region. At the Frozen Four, it ended St. Cloud State’s chance at a similar Cinderella story run.

In the final game of the season, Yale was up 1-0 heading into the final 20 minutes. A back-and-forth championship game between two rivals.

Then in the third, Yale scored again. Then again and then again. A 4-0 Yale victory. It had taken down yet another top dog, and its biggest rival. Quinnipiac’s domination all year long left it without a conference title or a national title.

“We’re devastated,” Pecknold said back on that day after the 4-0 National Championship loss. “It was a great year, and this wasn’t the way it was supposed to end. I’m proud of my guys. I really couldn’t ask for a better group. We weren’t perfect through two periods, but we played well enough. We had plenty of chances and we just couldn’t score.”

This is the day when I believe the gasoline was poured onto the fire and the rivalry truly emerged.

Since that point in time, Yale has only one win against Quinnipiac. Quinnipiac served up a bit of revenge last year when it swept Yale in the first round of the ECAC Hockey playoffs. It was one of the few positives in the season where it finished 16-18-4 and went 9-11-2 in conference play.

This year, like after every year, it seems the rivalry has grown. More intensity, more anticipation, more hatred. And this game, just like every game for the rest of this year, will mean so much more than a win against your rival.

But enough about the past. Let’s look at the now.

For Yale, it has relied on senior forward Joe Snively all year long. Snively leads the team in goals, assists and points, with 13, 14 and 27 respectively. He has almost double as many points as the second highest scorer on the team and has six points in his last three games. However, he only has one career point against the Bobcats in his four years of playing them.

In second, it’s a three-way tie. The tie is between a junior, sophomore and freshman, all with 14 points. Junior forward Robbie DeMontis has registered six goals and eight assists so far this year and also has been hot of late, with five points in the last three games.

Sophomore Kevin O’Neil hasn’t been nearly as hot. Despite having four goals and 10 assists total, O’Neil has one point in his last seven games, and has been off the scoresheet in his last four games. The final 14-point scorer is freshman forward Justin Pearson, who has five goals and nine assists.

In the net, it’s a toss up who will start against Quinnipiac. Senior Sam Tucker and junior Corbin Kaczperski have shared time in goal all year. Tucker has started in one more game with a better goals against average (2.30 compared to 2.70) and a better save percentage (.920 compared to .897) than Kaczperski, but a lowly 5-5-1 record compared to Kaczperski’s 6-2-2 record.

This was a situation that Quinnipiac found itself in for a good part of the season. However, since the turn of the year, it has been junior Andrew Shortridge’s net. He has started the last seven straight games, including two out of conference matchups that solidified that Shortridge is the clear-cut No. 1.

Shortridge has certainly deserved it as he’s been the best in the nation between the pipes. And that’s not an exaggeration. His save percentage (.952) and goals against average (1.22) are first in the country.

“I think whenever you have a goalie at .952, I think that’s beyond anyone’s expectations,” Quinnipiac associate head coach Bill Riga said regarding Shortridge’s performance this year. “We’re hopeful, thought realistic at what the number might be at the end of the year.”

Sophomore Keith Petruzzelli’s only time on the ice has been the first game of 2019 against Colgate, in which he was pulled in the third period, and last game on Feb. 2 against St. Lawrence in which he went was asked to hold the 6-1 lead Quinnipiac had heading into the third.

In terms of scoring, Quinnipiac does not rely on one player like Yale. It has five players with at least 20 points while Yale has one. And has 10 players with more points than Yale’s second best scorers.

How desperate? Well, Yale and Quinnipiac have identical 9-4-1 conference records. They both are tied for second place in conference with 19 points and each have eight ECAC Hockey games remaining.

It means making a statement. Who is the real top dog in ECAC Hockey? Who is fit to make a run at first place in the conference? Who will fight that extra inch to take the Heroes Hat?

Who will win the Battle of Whitney Ave?