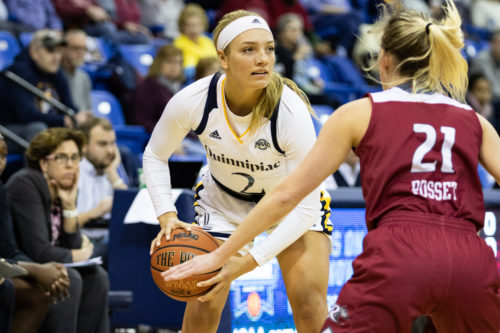 The Quinnipiac women’s basketball team (15-6 Overall, 10-0 MAAC) was led by senior guard Aryn McClure and senior forward Paula Strautmane Sunday afternoon at Lender Court, as it took care of business against the Rider Broncs (11-9 overall, 7-2 MAAC) by a score of 72-56.

The Bobcats were able to stay perfect in MAAC play this season and remained consistent against conference opponents. Quinnipiac was able to do this without its star senior forward Jen Fay, who was sidelined with a knee injury. Fay leads the Bobcats in points, assists and rebounds, and has been an integral aspect of the program for years. 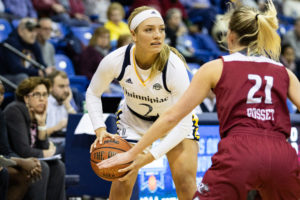 [/media-credit]The Broncs got out to a quick 7-0 lead over the Bobcats, but once McClure’s shots started falling Quinnipiac never looked back. McClure scored the first seven points for Quinnipiac as it remained consistent throughout the whole game after a rocky start. As the game progressed, the lead grew greater and greater for the Bobcats.

“We’ve always prided ourselves on having the next woman step up when necessary,” McClure said.

She did a lot of the dirty work for Quinnipiac leading them in scoring with 22 points. McClure hit a big shot at the first buzzer and had multiple And-one buckets that were vital to Quinnipiac extending its lead.

“Whatever comes their way they always handle the adversity and don’t look for excuses,” Quinnipiac head coach Tricia Fabbri said. “We’ve been able to withstand being short handed and now we’re getting stronger in our wins since we’re now able to win convincingly.”

With Fay out the Bobcats needed some players to make big plays in her absence, and McClure did just that by leading the team in scoring. Strautmane contributed 18 points of her own, as she provided valuable scoring from the other forward position.

“I really like playing against Rider,” McClure said. “I favor their open defensive style a lot more than certain MAAC teams that stack and make it harder to break through lanes.”

This is not the first time that McClure has had her way with Rider, as she scored 28 points against Rider in the 2017 MAAC championship her sophomore year, beginning the Bobcats run to the Sweet 16.

“Rider brings out the best in her,” Fabbri said. “It is something in their style and the way they get after her allows her to get forward and use her entire toolbox of skills to our benefit.”

Fabbri also preached the return of junior forward Jaden Ward and how valuable she is to depth as well, as she contributes a lot to the team both ways, especially in transition defense.

The Bobcats look forward to Thursday, Feb. 7 when they play host to Niagara who sits No. 4 in the MAAC standings as the regular season dwindles down. Quinnipiac will try to remain perfect in conference play, and that may be a little easier for them as Fay is expected to return Thursday night.

“Hopefully Jen returns the next game,” Fabbri said. “We remain very optimistic that her first game back will be this Thursday,”