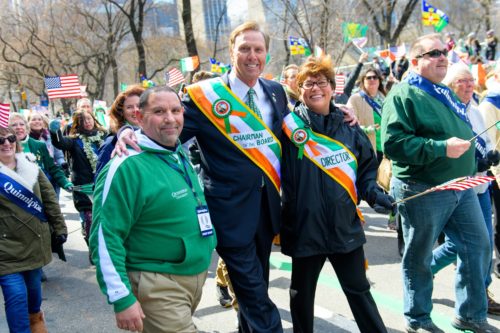 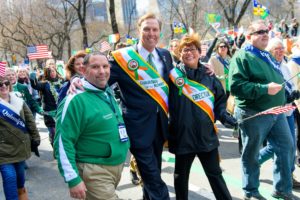 Quinnipiac is becoming a little less orange and green and a little more blue and gold after Irish Central reported that the university has pulled its annual sponsorship from the St. Patrick’s Day Parade amidst President Olian’s strategic plan proposal.

The school has marched in the parade for nearly 30 years under previous President John Lahey.

“The university is in the midst of a rigorous and comprehensive strategic planning process around the critical priorities of student learning and institutional excellence,” Lynn Bushnell, vice president for public affairs said. “Given our many student-centric priorities, our hope is that Ireland’s Great Hunger Museum identifies diverse sources of support for its programs and initiatives, including philanthropy.”

Bushnell added that the university respects the parade and its meaning but The University wants to refocus their priorities on the campus.

“As for the parade, while we enthusiastically support its important goals and underlying spirit, we are redirecting university resources to more immediate needs that serve students on the campus, Bushnell said.”

Joe Iasso, senior higher education leadership major, agrees that the funds spent on the parade would be better served elsewhere in the university.

“We could be spending the money we use to sponsor the parade and transport our community there for things far more important to the present needs of the University–as we close WQUN, and perhaps IGHM [Ireland’s Great Hunger Museum],” Iasso stated in an email.

WQUN, Quinnipiac’s community radio station, will be closing its doors in June 2019 due to decreased student interest in the radio industry, according to the university.

Christine Kinealy, director of Ireland’s Great Hunger Institute and professor of history hopes community members will continue their involvement in the celebration.

“St. Patrick’s Day is special because on that day everybody is proud to be Irish–regardless of their background,” Kinealy said.“It is a true example of inclusive diversity.  I hope students and the rest of the Quinnipiac community continue to celebrate it in a way that is meaningful to them.”

Iasso, like Bushnell, agrees that recognizing Irish history is important, but stated that Quinnipiac’s strategic plan should focus on issues closer to home.

The possibility of closing the Irish Famine Museum is also being considered, according to Irish Central. In a statement on Irish Central, President Olian said the decision will be based on the needs of Quinnipiac students.

“We are evaluating all our programs to determine how we can best address the needs of our students,” Olian stated in the Irish Central article.